As an artist, I do four things; Oils on Canvas (Social Commentary), Drawings of National Parks, Photography of Birds and California Native Plants and 2D/3D Digital.<br /> <br /> Since most here will be interest in digital work, I'll talk about that. I started in the digital world with a TI-99/4a computer in the early 1980's and immediately started creating art and animation with a very limited graphic range in hexadecimal code (16 colors, 256 shapes). I eventually became a published artist for Asgard Software and a year later when out on my own to form “Notung Software” which became on of the most popular TI Software companies. In 2010, I was inducted in the TI-99/4a Hall of Fame.<br /> <br /> After making my switch to the PC, I started with Sketcher (the precursor to Painter) and even owned Fractal Design's "Poser 1". I didn't start seriously playing with Poser until Version 3 came around. With the advent of Poser 4, I began by creating textures and started a career as a digital artist, selling my work through Zygote, Vista, DAZ3D, Hivewire3D and Renderosity.<br /> <br /> I really didn’t find my nitch in the 3D world until I partnered with BL Render to do the Songbird ReMix Series in 2003. The following year, I came into my own blending my love and knowledge of birds with a strong environmental theme "Threatened, Endangered, Extinct". That set, designed specifically to raise awareness about threatened species and why they're going extinct, became a template for all my work. <br /> <br /> Since then I’ve steadily worked on improving my skills with Painter and Modo, and of course, producing more 3D birds and other flora and fauna with a strong environmental message. Today, the Songbird Remix birds have appeared in films such as ”I am Legend”, in Audubon literature and advertising, Duncraft (bird product & seed) advertising, in the museum presentations (such as the National Wildlife Research Center of Saudi Arabia) and even billboards and bus benches for the Omaha Reads promotions.<br /> <br /> Besides being a Renderosity Vendor, I work at home as a freelance artist/photographer and also volunteer/lecture at the Theodore Payne Foundation (a Foundation that focuses a native plant awareness) and Audubon California. 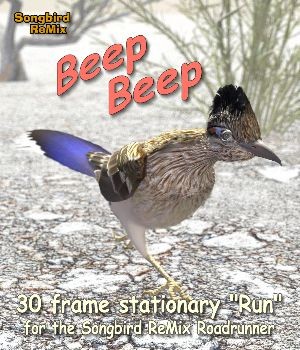 Crown for the Nature's Wonders Frog