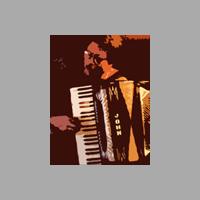 I like to make pretty pictures. It's that simple.<br /> When I got my first computer about a decade ago, I had it made by a 15-year-old whiz kid, who showed me a program he had, called Bryce 2. He asked me if I'd like it installed on my machine. I said, yeah, cool. I later learned it was a cracked program, so I made that right, and then bought Rhinoceros, because I wanted fancier models than Bryce could allow. Terragen and eventually Nendo/Wings followed. Then I needed better renderings, so I got into Renderman-compliant programs BMRT, Entropy, and now AIR, though I still use Bryce for renderings, too.<br /> Then there was Photoshop to do postwork, Dreamweaver and raw HTML coding to show works to other artists, a bit of this, a bit of that, some other non-related computing (Finale for my music, MediaShout, a bit of Python, Linux, InDesign for my brochures, and on and on), and now I actually help others to learn this stuff. Not where I expected to be, but enjoying the ride all the same.<br /> Now, I've started using my skills, which I never thought were all that great, for advertising and for publications of all sorts. I've even begun selling models to people who have approached me. I still work for a living as a music minister and as a marketing director for a non-profit hospital district. Now, because I only started out wanting to make pretty pictures and had to learn everything from C++ to shader writing, I often am the geekiest person in the office, wherever that may be ... and it's all fun.<br /> I always have liked to do art with traditional media, but computer has allowed me to create a whole other dimension of objects. Many of my models are simple, but they serve me well in marketing and publications. Who knew? Some of those who know me have started seeing my username pop up in the photography forum lately, too. I was bereft of camera for about four years, which was a long story and not all that interesting. Suffice it to say, I'm excited to be back. I have an Olympus in hand again and have been annoying people with my photos from time to time.<br /> Recently, after having picked up the guitar several years ago,Â  I began playing accordion. Life is just more and more fun, isn't it? I'm actually getting better at accordion. I just said to myself, "Self, who cares what people might think; I like the accordion. And that, as they say, is that. :ï¿½)

waldomac posted a new gallery image Coffee for All.