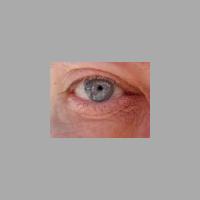 This isn't a bio, yet, so much as a sort of explanation of what I'm doing here, with a little about who I am. I'm planning to update it, as time permits and the urge encourages. <br /> <br /> I'm fairly new to 'serious' digital art. I've played around with DAZ Studio and Bryce for a few years, but only used them a few times to produce for-publication online artwork. That sounds more impressive than it is. My finished works have been about 400 pixels across, and used as images or graphics on a website or blog. <br /> <br /> I was introduced to Renderosity a year or so ago, started an account, and got distracted. When I got back, last week I think it was, I couldn't log on. Frustrating. I finally started a new account. A little later, I had a question that didn't seem to be covered on this website, so I called customer/tech support. Question answered, and a little of my allotted time left over, I asked about the old account. <br /> <br /> I - hadn't - confirmed - my - email - address. <br /> <br /> Correcting that blunder took the person in support less than a minute, and me about the same. <br /> <br /> So, now I've got two accounts here. This one, with my preferred "Norski" handle, and another one. <br /> <br /> Now, a slightly re-writted mini-biography, from when I was in the website design business: <br /> <br /> I have been writing, for pay or for fun, most of my life. Drawing and painting were more of a hobby. <br /> <br /> In 1986, I became the advertising copywriter for a small publishing company in Sauk Centre: Vocational Biographies. This company produces an exciting career information resource, used by schools and counselors in all fifty states, and beyond. By that time, I had collected an eclectic set of career experiences. Just a few of these were: English teacher; staff writer for an historical society; radio disk jockey; and office worker / customer service contact for a commercial refrigeration company on the West Coast. <br /> <br /> In addition to on-the-job experience, I had studied Computer Science for two years at what is now the University of Minnesota, Moorhead. I had also studied art and design, although less systematically. <br /> <br /> The publishing company discovered that I could handle graphic design, and got along with computers. I started designing their advertising pieces, as well as writing copy. <br /> <br /> Years passed. My skills with software and data analysis were needed to maintain and study the company's mailing lists, so I started doing that instead of creative work. Through all of this, my wife's advice served me well: "keep learning!" <br /> <br /> In 1997, I realized that there were very few websites which discussed small towns: at least, not favorably. Since I like living here in the center of Minnesota, I created a small website called "I Love It Here!" <br /> <br /> That website grew. Now it is called Brendan's Island, with over fifty pages and four major sections. Early in 2003, the Marketing Manager of Vocational Biographies discovered Brendan's Island. She was impressed, and wanted to know who had designed it. <br /> <br /> That's when I started developing Vocational Biographies' online presence. In June of 2003, the company's website was up and running. Project Special Education, a sister company of Vocational Biographies, wanted a web presence. I launched Project Special Education's site at its new URL in February of 2004. <br /> <br /> Somewhere around that time, the stabbing pain in the thumb and first two fingers of each hand evolved into numbness. Since I'd learned touch-typing back when electric typewriters were cutting-edge technology, and had been using keyboards ever since, my fingers 'remembered' where the keys were, even if I couldn't feel them. <br /> <br /> Drawing was out of the question, though. I tried, and discovered how much I depended on being able to feel subtle changes of pressure on the pencil or pen. That was frustrating. Later, I learned that I had carpal tunnel syndrome. All those years at a keyboard had caught up with me. <br /> <br /> In the spring of 2006 I was laid off. The timing was good, since there was still a chance that carpal tunnel syndrome hadn't killed nerves leading to my hands. Besides that, my hips had locked in place, and there were a few other repairs to be made. <br /> <br /> I'd planned to use the hospitalizations and recovery times as opportunities to work on several projects. A flaw quickly became apparent in that strategy. Between pain killers and blood loss, I was doing well to exercise and stay awake. <br /> <br /> Now, with a mobility and dexterity I haven't enjoyed in years, I'm looking forward to developing A Small World of Websites: a growing set of websites and blogs. I've got the writing skills, and now have a big incentive to develop better graphics skills. <br /> <br /> Minnesota for Web-Wise Travelers, a directory of destinations and diversions in Minnesota and the Red River Valley of the North; and Easy Griller, an efficient griller's guide to frill-free outdoor cookery, have been launched. Loonfoot Falls is paddling closer to the day when it will show Small Town America as it never was, and other as-yet-unnamed websites are making that difficult transition from being intriguing ideas to having word-counts and deadlines. <br /> <br /> One way or another, the next few years should be exciting. <br /> <br /> October 9, 2008

In the heart of Darkest Minnesota