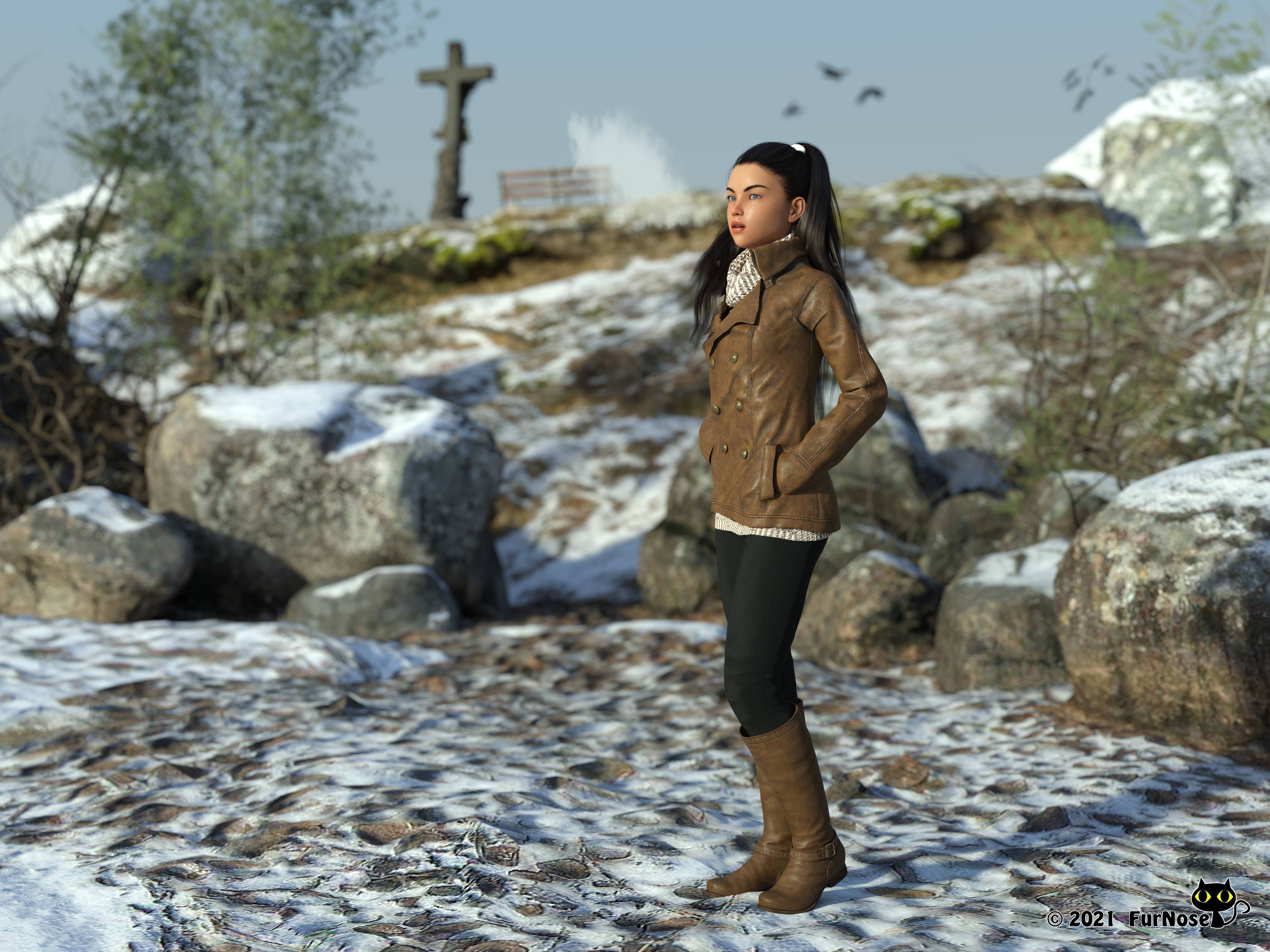 outstanding pov and render ... Merry Christmas to you and yours

Her feelings.... Pretty much align with mine, and probably several million more of us. The image and the words rip straight to the heart. And they pretty much echo the loss of faith both my wife and I have felt this past 2 years. This F-ing, neverending pandemic... New variants on a weekly basis... And as icing on this foul-flavored cake we have to deal with a bunch of obnoxious losers who we are supposed to be able to look up to as leaders, acting like a bunch of spoiled-rotten 6-year-olds.

And yet... There are still those few, shining precious moments and people that at least somewhat restore a little glimmer of light and hope that humanity and Greater Powers are still there. And they're wondering what the hell to do as much as we are. As long as life exists, there is always hope.

May you have a blessed Christmas, my friend, and a hopeful 2022 for all of us.

Wow, such a beautiful portrayal of someone like us and seeing everything happening around her. It's almost like scenes from a movie and sometimes you want to wake up and think this is not really happening. But it's true, it's someone you know, or you just talked with a few hours ago and then suddenly they're gone. It's quite a sad reality. And it makes us realize we're just humans and although we have different backgrounds, lifestyles and dreams but we're all thrown together in this chaos. Just so sad. Thank you for sharing! Merry Christmas and may peace, joy, hope and prosperity follow you into the New Year! Big hugs!

WOW... What a marvelous cration!!!I Wish you a happy Christmas 🙋‍♂️🎄

Splendid image and text. There is always hope. We are now past the shortest day; the nights will not drag as much.

Marvellous work and writing! Merry Christmas, stay joyful, healthy and motivated for the Christmases to come! 😊😘👌👍🎄

This is beautiful work. A very merry Christmas to you and all your loved ones!

A lot of prose but worth reading. I agree about the passing of time - it's like a centrifuge with a broken governor...spins ever faster until it quits...

A gripping story, I feel like Rod does.🎄❤ Thank you and Merry Christmas.

amazing realism and beauty. times are trying, but I think there is light and the recovery of our nation

Perfect mood and artwork ! I admire the realism of your render : the pose is so perfect ! Like you, I wish that this pandemic will have an end, like you I feel tired about this situation ! Merry Christmas to you and yours !

Beautiful render and I can relate so well to your story, which was very well written by the way. I hope you had a peaceful Christmas and I do hope that 2022 will bring better days.

Merry Christmas to you and yours!

Beautiful render! Her feelings and your words echo my own! You said it so perfectly with your words and all I can say at the moment...is for me to send you my best wishes in regards to the days ahead my friend. May 2022 turn out to be a better year than the one we just left behind, may it provide a glimmer of hope and reassurance that things will soon get better. :-)

This is a terrific scene, well done!

I love that creation. Je model is beautiful and the scene too. Superb texturing of her clothes (I like her clothes). For me it's a great work.

The environment is really amazingly realist!

I chose this because it captures what a lot of people feel now. You write with flowing sentences, real passion, a musical way that expresses deep feelings, you even use alliteration here and there, quite musically...all, in this tale, in the service of a passionate personal journey which you make both personal for the character but also for everyone else. Your main character's confrontation with the cross--a figure she'd communed with in the past---along with her rage at his silence, is an age old cry which you've made fresh and harrowing and visceral---whether in words or unspoken feelings. (An old story...a wise religious leader bounds into the house of worship, bounds to the altar, and cries, "today we don't come to ask Your forgiveness: Today we come to give ours, for You've broken everyone of your laws and you remain silent..."-----an extreme example, but spiritual writing is full of them.) A very powerful moment for your character, and for us and, I assume, you. And you don't make it 'easy' by giving an easy answer: Christ remains silent: She has to find it on her own. As for your image, it fits the tale, her gaze is hurting, angered, but quiet--this is a private journey, it's in her eyes. And the surrounding is perfect, incl the primal but beautiful landscape, and the breath from her mouth (sweet touch). Beautifully done. I hope 2022 is a much better year for you and all your loved ones, and for the world as well...

Thank you, (and all who commented on this) for your honest and sincere comment!