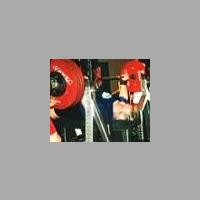 Robotalk <br /> <br /> -Voice actor plays "Soundwave" in TRANSFORMERS (new) and Gravity Man on MegaMan NT warriors for WB kids network..<br /> - is an abrasive Radio Talk show host in the Ron Ford Film Snakeman OUT NOW--and ROBO's Own "There's a terrorist Donut in your Fruit of the Loom" comic DVD is out and can be purchased cheap by messaging robo here..<br /> <br /> Just Broke the all time world record in the Bench Press for a man over 60 573 lbs a new WABDL World record !-lifted 500+ 20 times in 2005BIOOld !!!!!--Robo is reallllly OLD !!--but he has the sense of humor of someone 14 years or so..And he loves to do ZBrush pictures (and Amorphium 3.0 too) Of very odd situations..that are meant to provoke a smile or laugh--Is he a good artist? He doesn't think so --but he likes his own "cartoons." And 80% of the time the picture,image or scene "draws itself" as soon as the first few strokes are done. Only a few of his overloaded gallery are planned ahead..the picture and caption usually run into each other and exchance licenses about 3/4 way thru the'work.' <br /> What is robotalk ?? and why the name --robotalk?...Does he like to talk about robots??--Nope.. he is Robert O. Smith and he 'Announces /voice acts' for a living and a VIP at WAVE studios in Vancouver B.C. nicknamed him Robotalk after a session where he spoke faster than the average human or cyborg...Previously Robo has had nicknames like Thorndike Pickledish and Dr. ZinGRR --but for now his ZBrushing /Flash animating name is Robotalk..And when not trying to land an animated cartoon voiceover gig--or lifting in a WABDL sanctioned Bench press/Deadlift meet (in 'the too fat to be alive class') Robo is creating another visual whoopee cushion of fun and frivolity for you !