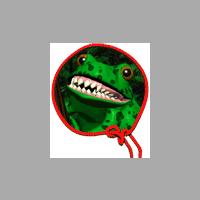 Yes, it's true. On the internet, I'm a rather dull, mild-mannered digital artist, but in real life, I am actually Superfrog.<br /> "Faster than a speeding dragonfly, stronger than a flathead catfish. Able to leap ten hungry alligators in a single bound. Look! Out in the swamp! It's a bird. It's a boat. It's Superfrog!"<br /> * * *<br /> For me, ideas are like butterflies that are flittering around by the dozens. Just grab one and render it, then move on to the next.<br /> BIO: <br /> I began 3D art with Bryce 3 in April 1999. Before that I played with various 2D styles and techniques. Back in the mid-70's and 80's, I worked in metal sculpture and had a line of "frog prints" selling in stores all over Southern California and Arizona. I have been in art in some capacity since childhood. Since the computer came along, I 've pr3etty much lost touch with brushes, pens and pencils which I regret.