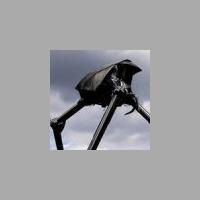 As to who he is, most feel that they are not qualified to answer this question. Those who claim that he exists are often embarassed when asked to supply evidence of their belief. To say he is an enigma is perhaps both misleading and overly percipient; as he is neither literati or Greek. If you believe you are experiencing an encounter with him (otherwise known as a 'Prenumbration') protect yourself with a slice of sticky date pudding and a warm towel wrapped firmly from forehead to loins. Once known as 'Turin_Turambar', the last excursion for oil in Iraq cost him his site and gallery on Renderosity. Some may say that he has had his wheels spiked... "Lonesome topaz waters baying There's still a foam horse yet to ride Sweet voiced in oceans fathomless"