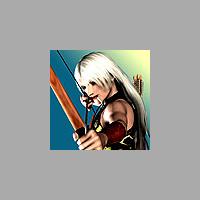 OK, you're here so you must be a little curious about me. I'll try not to bore you.<br /> Why did I name this Elfwine's Treehouse? I love trees and I've dreamed of living in a great big one. Have you ever seen those old Tarzan movies with the big multi-level house high up in a tree? That was so cool! As a kid I built many tree forts, which were little more than a basic platform high up in a tree. I would spend hours just sitting quietly in them watching and listening to the forest below. I miss those days and my walks in the forest. Who wouldn't?<br /> After High School I did a mix of working as a construction laborer during the day, and acting in College plays in the evenings. Because of my long white hair (which started turning when I was 15 years old) I was always cast as "the bad guy". The construction work paid little, acting paid nothing.<br /> So, finding myself going nowhere I enlisted in the US Air Force. This was a mixed blessing. I never really fit in, the odd man out. I never amounted to much. But at least the traveling was interesting.<br /> Astronomy is also a passion of mine. There is so much beauty and wonder in the cosmos.<br /> I spent a little over three years at RAF Alconbury in East Anglia, UK. While stationed there I was an extra in two movies: The Final Days of Patton, and War &amp; Remembrance. I got to shake George C. Scott's hand at the end of the day's shooting. He was a nice guy.<br /> I learned to play the 5-string banjo. What a fun instrument to play!<br /> A friend of mine asked me to join a medieval reenactment group. I did mostly for something to do in my off time. I brought my banjo to a few medieval events. I told people who looked at it strangely that the banjo's alternate personae was a lute. Most people liked it, some hated it. *shrug*<br /> It was during this time that I became very interested in primitive archery. I learned to make my own bows, bowstrings, arrows, quivers, armguards, in short everything. My favorite bow is a yew longbow with a rattlesnake skin backing and horn tips. Its light as a feather to hold but will darn near tear your arm out of its socket to draw it. I use the medieval English style to draw a bow. I do not hold the bow at arm's length and pull the string. I push the bow away from my chest while pulling the string to full draw.<br /> And so my military career ended ingloriously after 20 years.<br /> I found a tiny little house on half an acre of land out in the country. It had once been a one-room schoolhouse built in 1888. The school had been boarded-up for decades and the nearest rancher purchased it from the county and converted it into a house. When he passed away it was placed on the market and I bought it.<br /> I met a local girl who fell off the turnip truck in front of my house, so I ran out and scooped her up and brought her in yelling, "I got me a big un'!" She's a hobbit and I'm an elf, and I love her to bits. She's smart, quick-witted, a fantastic cook, and into making crafts.<br /> The only work I've been able to find was as a common laborer doing landscaping work. Years of dedication to country really means nothing to the civilian community. *sigh* After the landscaping job, for three years I did nude modeling for the University art students. Modeling paid for the gas and a little bit of pocket change. I guess I did that more for the students than anything. You should've seen who they had!! *shudder* I was also a volunteer fire-fighter for two years.<br /> I'm currently interested in renewable energy, especially wind since I live where there is a LOT of it. I recently came up with a simple idea that should quadruple the energy output of wind and hydro PM generators. I showed the idea to a few close friends, one of them is an electrical engineer. They both said they think I've got something. I want to give the idea away but to do so I need to patent it first. This will prevent greedy companies from hearing my idea and just patenting it and claiming that they thought of it. Have you seen how much patenting an idea costs?!? OMG! So that's why I'll probably end up just giving the idea away anyway and remain poor. I really believe its more important that the world benefit from any advancement in RE, than me. Right now I'm stuck. I don't know how to proceed. *scratches head*<br /> Anywho, that's about it. Bored to tears yet? ; )