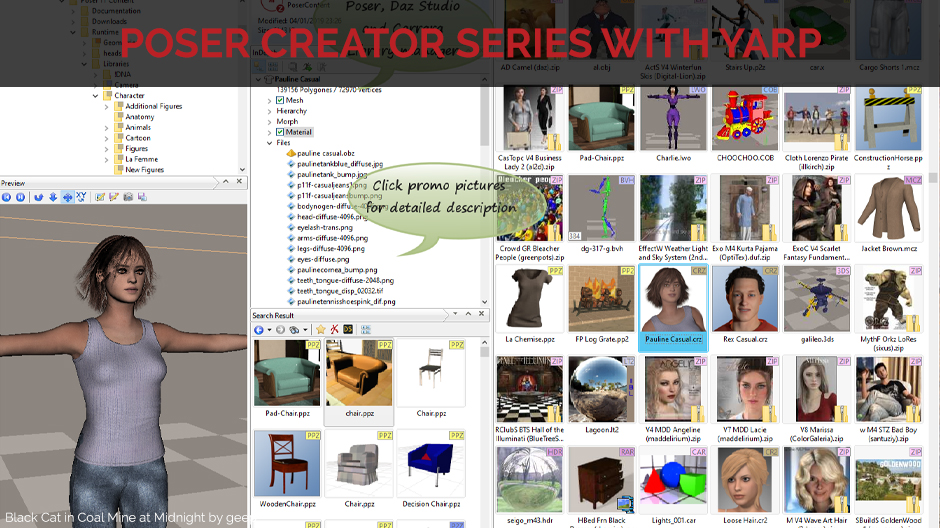 Have you ever wanted to use a partial pose? Or view all your legacy content in one place? Or find files missing from your runtime?

If so, then Renderosity vendor Yarp has a solution for you.

Yarp created a way to do this 20 years ago when he created the Photo 3D Organizer Explorer (P3DO for short) to help Poser users better navigate their purchases.

"On April 6, 2000, my software P3DO Explorer was the first upload of the software at Renderosity," Yarp said in an interview with Poser Software.

P3DO is a multimedia tool for viewing and managing your CG assets, 3D objects, 3D animations, and digital pictures with a simple, intuitive, Explorer-ish, thumb-nailed interface. It works in Poser along with other 3D program library managers.

Over the past 20 years P3DO has been improved and maintained to become a solution to manage CG assets.

For Poser users, the program acts as a Libraries browser, creating thumbnails, Runtime shortcuts, and colored directory nodes from internal and external runtimes. The browser displays your content in an Explorer-style window.

Yarp has completed version 2.8, which is ready for the 20th anniversary of its release. You can find it on Renderosity starting Friday, April 10. In the meantime, Yarp spoke with us about the program he developed 20 years ago.

How long have you been creating digital art and why did you start?

Yarp: I am an IT programmer since 1990 and I have been doing digital art as a hobby since 1998. The goal was to create sprites for 2D animation gaming softwares.

For this I started using Poser, beginning with Poser 3. Renderosity was already the major Poser forum at the time so I joined in 1999 (registrations have been reset in 2000, my profile shows 2000 but the actual date is sometime in 1999).

I got hooked by Poser and also by the friendship and positive spirit in the Poser community. Poser would not be the software it is without that helpful and creative community. All those artists that provide advices, tutorials, free and paying stuff. I feel at home at Renderosity.

What is Photo 3D Organizer Explorer?

Yarp: P3DO, a.k.a., Photo 3D Organizer, is a tool for viewing and managing CG assets, mostly 3D objects. The tool is focused on Poser and DAZ Studio assets. Here are some ways it helps:

File exploration: It is able to give a raw description of 3D files: groups/actors, hierarchy, list of shaders and textures, faces/polygons. The goal is also to be able to quickly navigate to all the files that you need in a 3D scene. Something that has more a 3D project-oriented spirit than the Library oriented one of the Poser Library palette.

3D preview: Some file formats have a 3D preview: all Poser file formats (although not accurate for PZ3), including Poses, and even DS DUF Poses. It also has a 3D animation viewer for BVH and PZ2.

A great support for archives: It is able to read 3D files from ZIP, RAR and 7Z, and can load a Pose or Material into Poser without unziping Also there's an installer that will extract from a ZIP into Poser libraries

It also has tools to clean a Runtime, undo a zip installation, Rename, delete, copy, move, drag and drop and all the stuff.

What inspired the creation of P3DO?

Yarp: When I began using Poser, I downloaded and purchased a lot of stuff, as all of us do. I needed a tool to organize those downloads, install the archives in Poser Libraries, and manage all the stuff I had installed. I wanted a dedicated tool. Because of the organization of Poser runtimes and also because Poser had thumbnails of its own in RSR format no 3D software would ever be able to do what I had in mind.

So I began working on P3DO in February 2000, and on April 6, 2000, the first version was uploaded at Renderosity's FreeStuff. Many followed and, 20 years after, I am still working on the software and the to-do list is huge. My hobby is now more P3DO than Poser, but I am a regular Poser user too.

How to get the most out of Poser's dynamic clothing