A Haven For The Weary, Epilogue by MioraaNyte 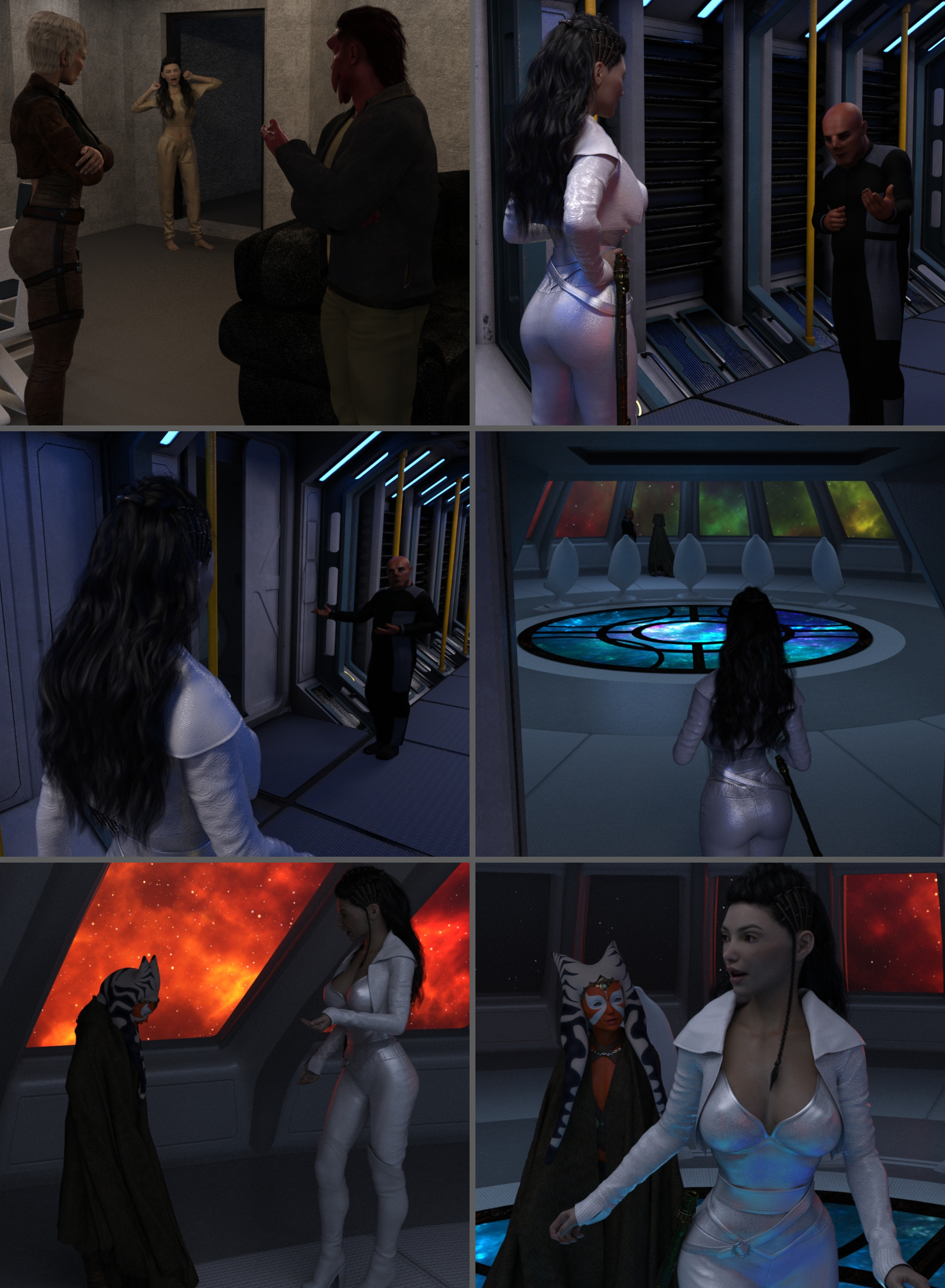 Hearing voices coming from the living area, Xin awoke from her sleep, got out of the bed and trudged wearily toward the sound.  Stepping through the doorway, she saw her friends discussing the day's plans.

"When we get the cargo organized, I'll call the dock chief and let him know it's alright to pick up the lift," Dara told Jeldark, "I let him know what we were planning earlier, so he'll be ready.  It'll give us time to decompress the hold and open the door for him.  After that, how he gets it from the ship to the docks is his problem.   The way he was talking, pretty sure his people have handled transfers like this before."

"While we're at it, we could move the some of the dry good containers from the crew quarters to a couple of the undocumented storage holds," Jeldark remarked, "also, we could carbonite freeze much of the perishable items and store what we can in that area for later use."

"Hadn't thought of that, usually it's just me on board and the fresh stuff is used before it goes bad," the Captain responded, "but now with the three of us, there's going to be a lot more and using carbonite for long term storage is a good idea."

Feeling slightly neglected that the pair had not noticed her presence, Xin began stretching and let out a big yawn.  "Why didn't you wake me, Dara?", she asked her roommate, "Give me a few minutes to dress and I'll meet you both there."

Turning to address the young woman, Jeldark sternly told her, "no, you are not going with us today," and just before Xin could protest, he added, "you are to rest and regain your strength.  If you show up at the ship, I will personally throw you off and escort you back here... am I making myself clear?"

Still shocked at the man's words and demeanor, Dara jumped in and spoke, "it's already going to be crowded enough with me, Jeldark and D9 in there... no offense sweetheart, you'd just get in the way."  Noticing the look on her friend's face, Dara went on, "if you don't want to stay holed up in here, walk around, meet the people and if you get hungry, go see Laulara.  They're mainly a cantina, but she does have plenty of  appetizers and a few of the more popular fast menu items... by the way her cook, Lantrell, makes one hell of a nerf burger."  Then turning to the Sith, she said, "well, the sooner we  get started, the quicker we'll finish.  Let's head out."

As the door slid closed behind the duo, Xin let out an exasperated sigh, she wanted so much to go with them today but knew they had good intentions to exclude her from the activities.  "They're right", she thought to herself, "I do need some rest," and then as her stomach began to slightly growl, she inwardly laughed, "and obviously something to eat."  After returning to the bedroom to dress, Xin ventured out into the corridor, to head toward the cantina.  Turning one of the corners, Xin came upon the alien male she had seen yesterday at the cantina.

Standing there, the man bowed his head in greeting and then motioned Xin to follow him.  Not sure what to do next, she said to the man, "I remember seeing you yesterday, I believe I heard the Matriarch call you Nrom."  Smiling as he nodded in acknowledgment, Nrom again motioned the Jedi to follow.  Sensing no malice in the alien, Xin asked him to lead the way, though she remained wary just in case.  Walking down a couple more corridors, Nrom stopped at a door marked 'Observation' and motioned again for her to follow as the door slid open and he entered.  After entering, Xin stopped to check her surroundings as the man continued to head toward a cloaked figure looking out the windows.

"Thank you, Master Nrom," the mysterious person said to the man in a feminine tone of voice, "she also instructed me to tell you that you are always welcome on Tython and looks forward to seeing you soon."

Smiling as he nodded to the figure, Nrom turned to exit and as he passed Xin, repeated the gesture then left the area.

Walking toward the person, Xin heard her say, "hello Master Xin Quon," then while turning to face the Jedi, removed the cloak hood to reveal a young Togruta girl.  Bowing her head in respect, the girl went on, "I am Ky'reyal Tano and I have been assigned as your new padawan."

"You've made a mistake, youngling, I left the Order and and am no longer a Jedi," Xin told her, "I don't know how you found me, but you need to go back to Tython."

Raising her head to look Xin in the eye, Ky'reyal responded bluntly, "there is no mistake.  I am your your new padawan and like it or not, you're stuck with me lady."  Shocked at first by the girl's attitude, Xin was about to speak when Ky'reyal continued, "I have a message from Grand Master Shan and I quote, 'I do not accept your resignation from the order... You are Master Jedi Xin Quon and you have been assigned Ky'reyal Tano as your padawan.  You are to train her in the ways of the Jedi Order as is your sworn duty.  Like yourself, she is quite unique in her talents and mannerisms, you will make an excellent team.  May the Force be with you', end quote."  Then with a devilish grin added, "and she also said that if you have a problem with it, you're more than welcome to come to Tython and discuss the matter with her... personally.  Her emphasis, not mine."

With resignation in her voice, Xin replied, "she always was a professional when it came to getting in the last word."  Turning to leave, Xin called out to her new padawan, "you hungry Ky'reyal?"  Getting an affirmative response from the girl, Xin motioned and told her, "well then, come on.  You and me got a lot to talk about... ... ..."

Excellent end to this chapter, looking forward to the next.

So now our heroine has padawan... I had a feeling this would happen. But I thought it would be Jeldark going light side, nice surprise.

And why does the padawan's last name seem so familiar? 🤔

Actually, Tano is a common surname amongst the Togruta.

Has been a glorious series and creations.

very interesting story and outstanding composed scenes. she is gorgeous

These 6 scenes are superb, magnificent work and in more accompanied by a text to which one is suspended, thank you for this beautiful sharing !!