Chasing A Dream, Pt.3 by MioraaNyte 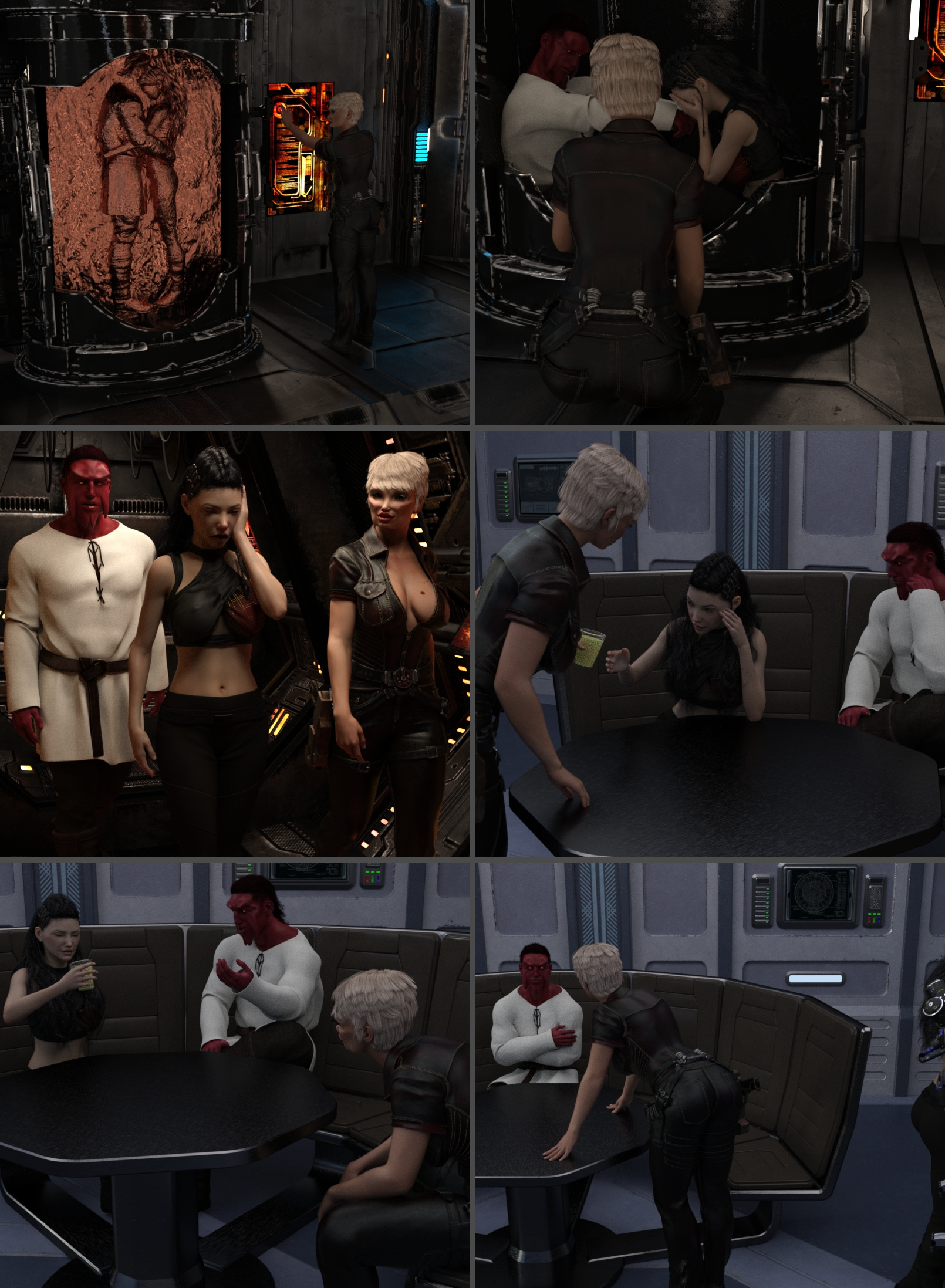 "We have entered hyperspace, Mistress," D9 informed Dara over the ship's intercom.

Walking to the carbonite chamber's control, Dara began entering the code to begin the thawing process.  As the machinery hummed to life, she went over to observe the progress,  within a few minutes, it was done.  Watching the occupants slump to the floor, Dara knelt down and asked, "you two alright?"

First to speak was Jeldark, "I'm fine Captain, other than the normal temporary blindness.  But it will pass shortly."

"Who let that bantha step on my skull?" ,Xin moaned, holding her head in her hands.

"First time being frozen will often give you a splitting headache," Dara softly replied to her friend, "can make the worst hangover seem like a mild annoyance."  Giving the pair time to recover enough to walk, Dara instructed them, "follow me, we're going back to the lounge."   While walking through the corridors to their destination, Dara could see that the Jedi was in agony.  "When we get to the lounge, I'll get you something for that headache," she told her friend.

"Thank you, Captain," Jeldark addressed the Captain, "had I known this was her first time, I would have warned her and done my best to shield her from the effects."

"How could you have done that?" ,Dara asked the Sith, then after moment of thought, said, "never mind, probably one of those Force things you guys can do."

Sitting at the table, Dara went over to the first aid cabinet to prepare a remedy for her friend's ailment.  Returning shortly, she handed Xin a glass containing a vile looking concoction and offered her the container stating, "here drink this, it'll fix you up."

Taking the glass from the woman's hand, Xin took a gulp of the liquid.  Bringing the cup quickly down from her lips, Xin stared at it with a disgusted look on her face.  "What did you put in here, mynock piss?" ,the woman exclaimed.

"Congratulations sweetheart,"  Dara jovially responded, "you're the first one to ever guess my secret ingredient."

Adding to the banter, Jeldark interjected, "surely you've heard the old saying that if it tastes bad, it must be good for you."

"Please don't make me laugh, it hurts," Xin retorted as she choked down the last of the fluid.

Calling D9 to the area, Dara instructed the droid, "D9, take Xin to my quarters so she can lie down for awhile."

"But Mistress," the droid protested, "that will mean leaving you alone with this meatb... the Sith."

Watching her friend and the droid leave the room, Dara waited until the doors closed behind them.  Turning and leaning on the table, she stared intensely at Jeldark.  "Alright Sith," she flatly stated, "you and I are going to have a talk... ... ..."

great work on lighting and panels. characters are super along with props used in each image.

Impressive use of graphics to illustrate a very well written story line.

I am so glad I am getting caught up on your work. Very fine and creative visual and written dialog.