Packing It Up, Pt. 7 by MioraaNyte 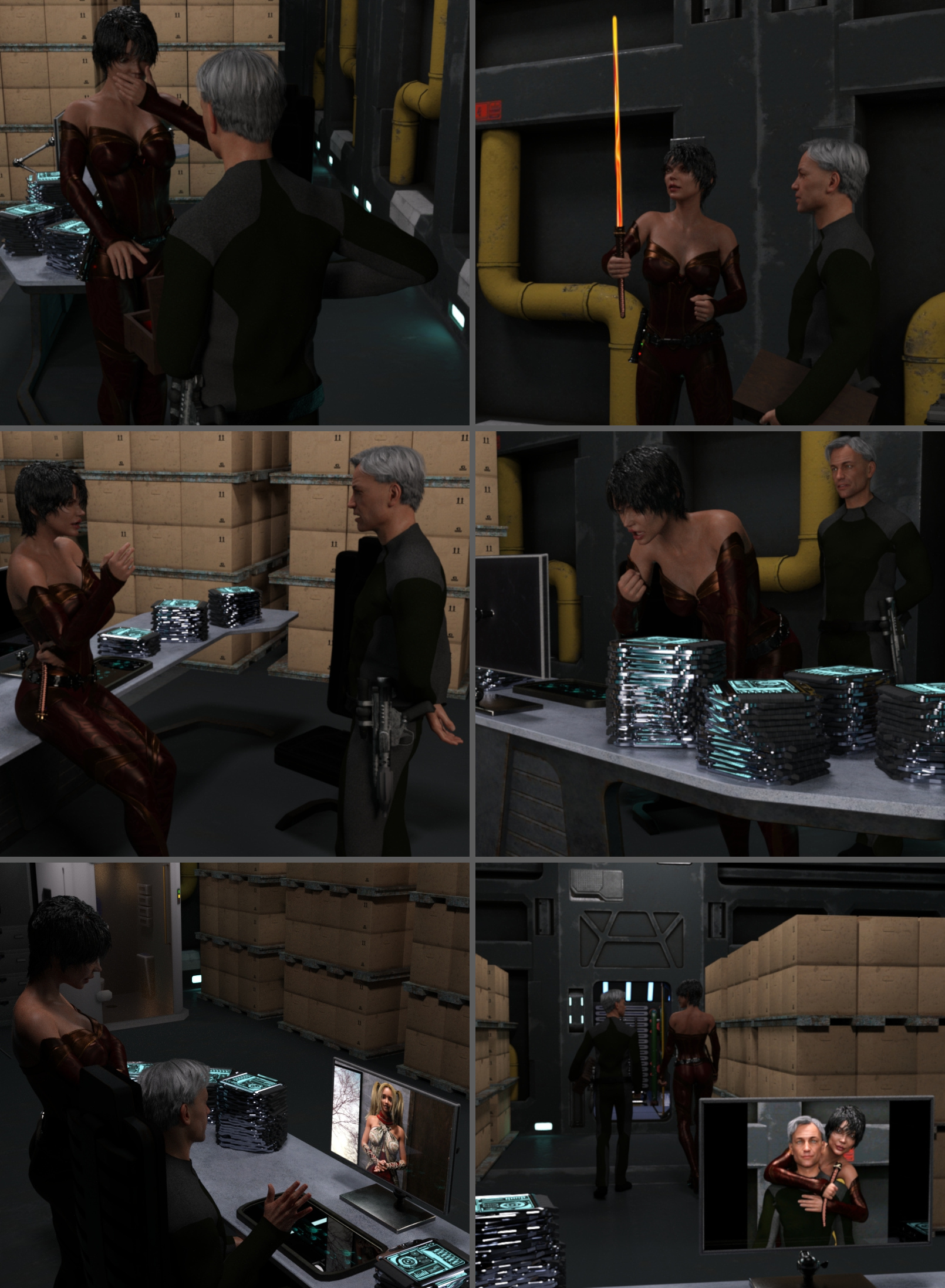 As the Lieutenant opened the case, Zefaara was overcome by shock at to what it contained.  "Is that what I think it is?", she asked in astonishment, "you actually found it?"

With a smile on his face, Drellik responded to the Sith, "it is, My Lord," then pausing for a moment, "it's your ancestor Lord Aloysius Kallig's personal lightsaber and your rightful inheritance."

Taking the saber from the case, Zefaara began admiring its sleek design and unusual finish, touching the activation button, the blade came to life.  "I've never seen a blade like this before, the color is like none I've ever seen, Sith or Jedi," she remarked.

Upon seeing the blade, the man said, "amazing!  I've seen writings that describe a crystal so unfathomably rare, that it could only be produced when a sun went supernova, and the chance of that was beyond all calculation"  then continued, "but it seems Lord Kallig discovered this impossible creation... absolutely amazing!"

After deactivating the blade, Zefaara took the lightsaber that presently hung on her belt placed it in the empty case and replaced it with her ancestral  lightsaber on her belt.  Turning to have a leaning seat on the desk, she asked the man, "so you mentioned this Bragen was going to sell my saber to the pirates had you not hidden it and brought it here?"

"That was my assumption, My Lord," the man replied, "or he may have wanted it for his own gains, perhaps as a way to get a promotion and another duty station through another Sith Lord."

As the anger in the woman came to a climax over what she heard, Zefaara turned and slammed her fist on the desk's durasteel top, causing it to dent.  Having seen the Sith in a rage before, Drellik began to slowly back away in fear that he could become an accidental casualty of her anger.  "That sorry bastard, I'll have him flayed alive before my eyes for this," she bellowed.  But as her rage seemed to come to a crescendo, an  uncanny calm that the man had never seen before enveloped her, standing upright she turned to face the lieutenant and spoke gently, "I've got a better idea."

Reaching out to gently touch the man's arm she instructed, "have a seat Talos, we have business to attend to."  As Drellik took his place behind the desk, Zefaara entered her code into the terminal and contacted Mayla back at the compound.  Within seconds the young woman's image appeared on the monitor as the Sith began to speak, "Mayla, I would like you to meet Lieutenant Talos Drellik, he'll be joining our group."  As the two acknowledged each other, Zefaara continued, "please see to it that all documentation of his new assignment is recorded and is effective immediately."  Pausing momentarily for her personal assistant to reply, the Dark Lord continued, "also my dear, there is a Colonel Bragen presently stationed on Hoth, I need you to arrange something special for me, please..."

After the passing of a few minutes, Mayla's image returned to the screen.  "Everything is in order, Master.  I have also taken care of seeing to the Lieutenant's personal possessions being picked up and brought here," the girl informed the Sith, then added, "and the other business is also completed."   Pausing briefly, Mayla then addressed the Lieutenant, "welcome to the group, sir.  The Master has spoken highly of you, it will be a pleasure to meet you."

Bowing to the young woman's image, Drellik cordially responded, "I look forward to it, Miss Mayla.  Thank you."

After thanking her, Zefaara closed the channel and addressed her old friend, "well now that all the proper paperwork is taken cafe of, I think it's time we leave.  Talos, be a dear and grab the case with my old lightsaber, let's get out of here."  Doing as instructed, Drellik scooped up the case and followed the Sith toward the exit.

Speaking to the Dark Lord, the Lieutenant said, "it will be a pleasure and a privilege to work with you again, My Lord.  Thank you for this honor."   Then turning to take a last look at his former 'prison cell'  added, "do you think the Colonel will like his new assignment?"

"At least he won't have to worry about freezing to death,"  then with a small laugh, "besides, our little housewarming gift should make him feel right at home..."

Seems in the end, the colonel got that transfer he wanted... kinda, sorta.

How have I missed your work? So much effort and thought has gone into this. I need to go to the beginning and read the story properly. 😎

I really like following your well written and beautifully illustrated stories. You are incredibly talented and a joy to follow. Well done in every aspect.

Thank you. My goal is to entertain through words and images. I also try to tell the Star Wars saga from the other side of the coin, the Sith. So many stories are out there telling it from the Jedi POV.

Love your stories and how you bring your characters to life through words and pictures, keep up the great work.

Magnificent awesome Artwork. I love Sci-Fi and I'll have to get the story from the very beginning.