Packing It Up, Pt. 5 by MioraaNyte 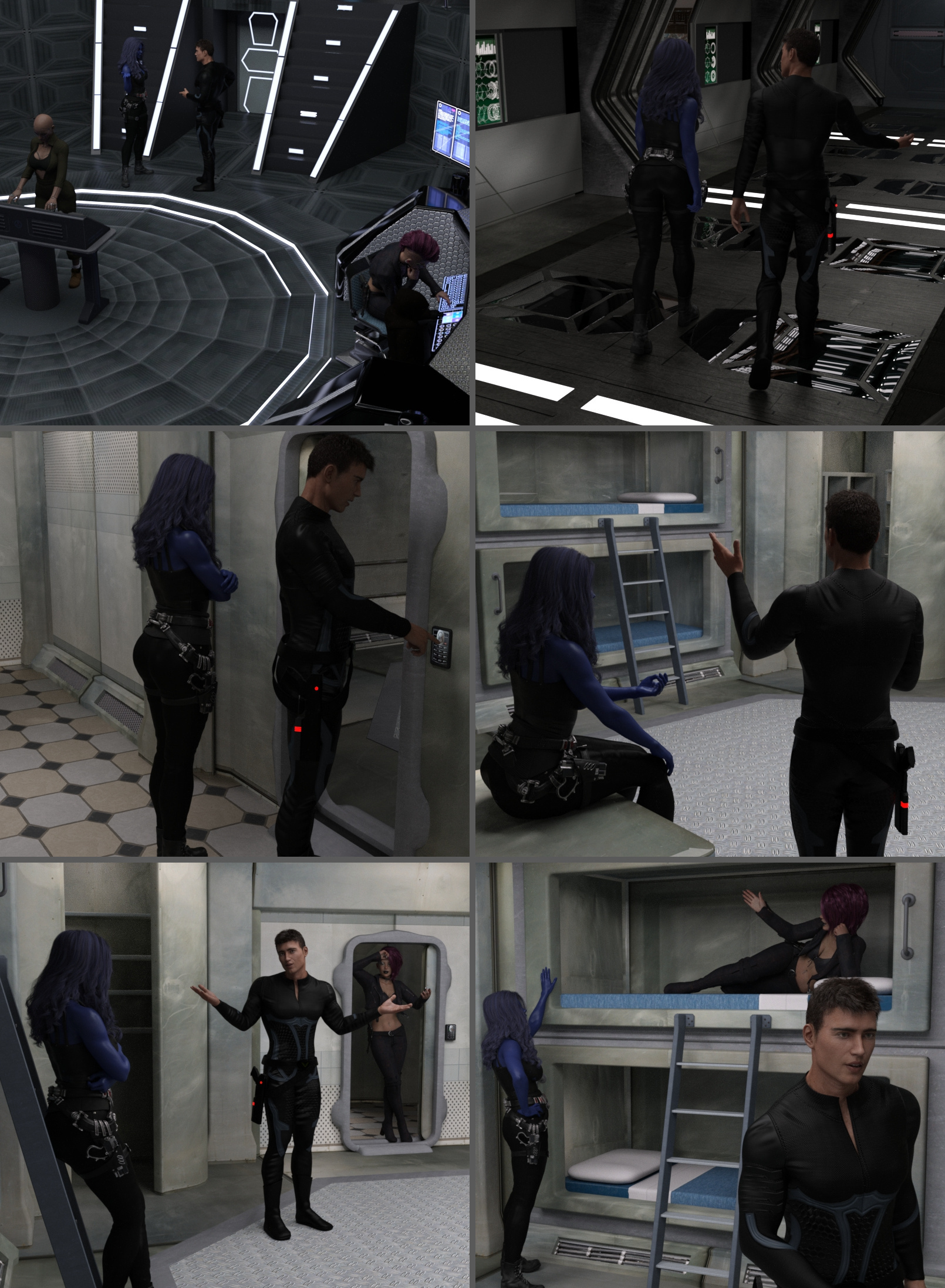 After a brief reunion, the Commander and Malorva decided to continue the tour of the ship while Mako stayed behind with Blizz and Lexi to further familiarize herself with the engine systems.

As the pair went through the ship, the Commander showed Malorva one of the crew quarters bays, explaining, "this is the individual crew quarters, this bay is the lower port side and has twelve compartments.  There are three more like this, one on the next level up and two more in the starboard side."

Looking into one of the rooms, Malorva commented, "they're a little small, not a whole lot of space."

Replying to the woman's observation, the Commander replied, "they are somewhat compact, but compared to most starship crews sharing a barracks style quarters, I'm quite sure they'll appreciate the privacy.  The only drawback is there are shared shower/latrine facilities for each side and level, but then again, most seasoned crews are used to that."

"No separate facilities for males and females," Mal asked, "won't that cause problems?"

Noting the woman's concern, the Commander replied, "even on the largest capital ships, all crew members share these facilities.  I'm sure it was a bit uncomfortable for most in the beginning, but as time passed, it became normal daily life."  Pausing for a few minutes for the woman to further check out the area, the Commander went on, "don't worry, you won't be living here, as senior staff, we have a separate area.  Follow me and I'll show you."

After passing through a couple of corridors, the two arrived at the senior staff area.  Entering the access code on the control panel, the man remarked, "here we are, this is your and Mako's room."

"I thought there would be private rooms for us," the woman queried, "we have to share with another?"

"On a starship, space is a premium," the Commander responded, "while we may be sacrificing a little privacy, we at least have our own shower and latrine.  Oh, by the way, mine is the door behind us and is the same setup, I just don't have a roommate, yet."

Noticing the room at the end of the corridor, Malorva asked, "who's room is that?"

To answer the woman's question, he replied, "that's the VIP quarters, Lexi is the only one on board with access, I don't even know what's in there."

Entering the room, the woman took a seat on the table and questioned the man further, "speaking of that Lexi, what is she exactly?  I've never seen a droid so... 'human'."

With a slight laugh, the man responded, "Lexi is what you might refer to as a physical manifestation of the ship itself and has the official position of the ship's steward, though she's actually more than that.  According to Gruud, Lexi is a true artificial lifeform, capable of learning new things like a human, even having the ability of developing a sense of individuality as a person."  Stopping a moment for the woman to let the information set in, he continued, "after talking with her myself, it's hard for me to think of her as a machine.  Once you get to know her, you might just feel the same as time passes."

Rising from her seat, Malorva leaned against the bunk ladder, looked around again and stated, "a bit bare, isn't it?  Not very homey."

Turning to respond, the Commander replied, "I don't know, perhaps a coat of paint, a few pictures..."

Suddenly Mako's voice interupted the man, "some throw rugs, fluffy pillows and soon it'll rival the poshest suite on Alderaan."  Pushing past the two standing there, Mako suddenly jumped into the upper bunk and exclaimed, "dibs on the top!", as she reclined on the bed.

Turning to leave, the man called to the women, "while you two get settled in, I'll have Lexi make sure your belongings are brought on board."  As he was passing through the door, he could barely stifle the laugh as he heard Malorva say to Mako, "really Mako, you called dibs?"

To which Mako retorted, "you try living in an orphanage, getting stuck on the bottom and the one on top is a bed wetter..."

Your stories and panels are so professional. 😎👍

It's been awhile, I was starting to get withdrawals. Another great chapter in this marvelous saga.

A huge and beautiful work

Very talented and creative, both the render panels and the writing. You are to be commended and appreciated for the work you out into your art.

Good storytelling, both with the images and text.