Packing It Up, Pt. 6 by MioraaNyte 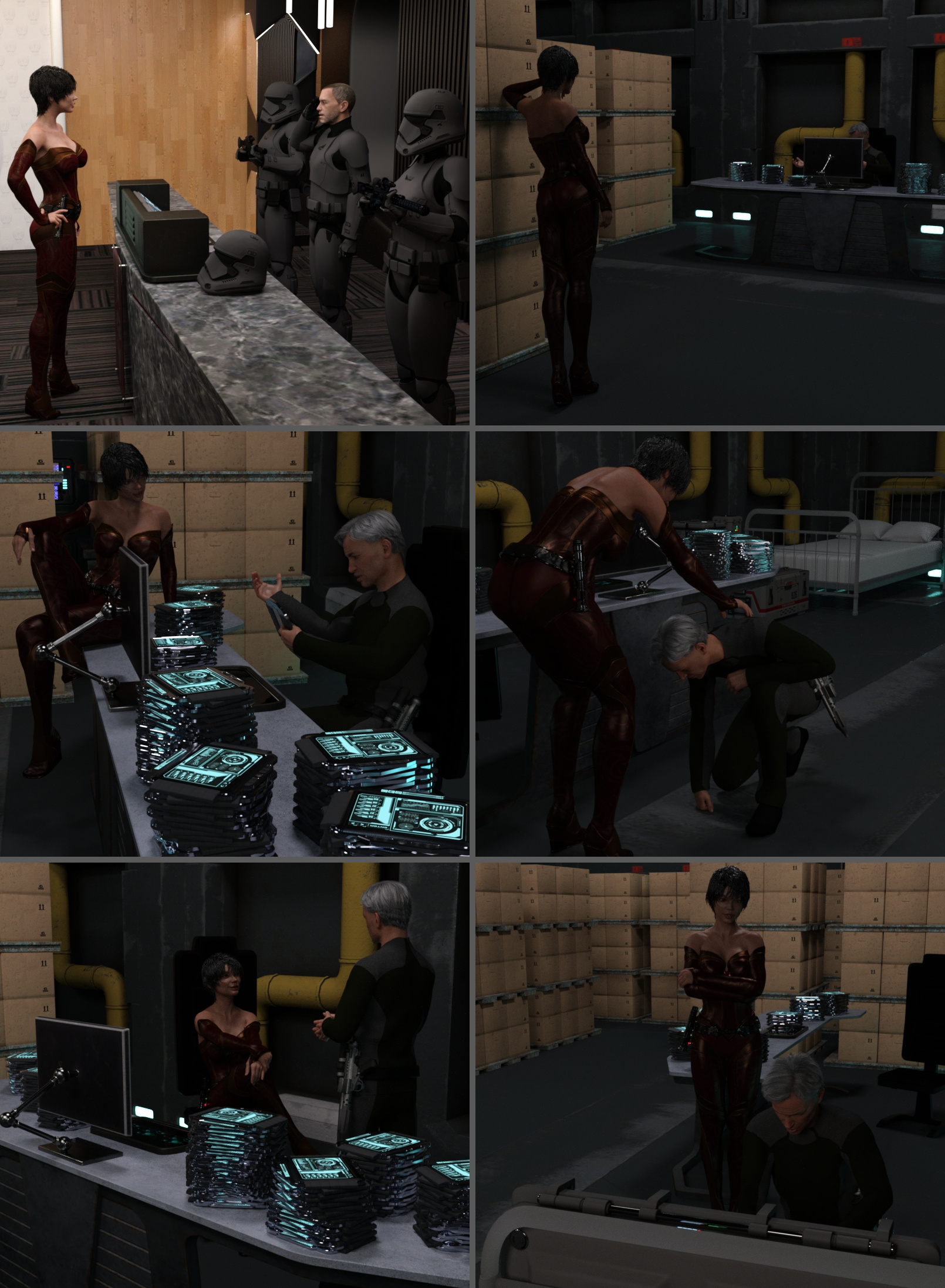 Arriving at the headquarters of the Imperial Reclamation Service in Kaas City, Zefaara entered the lobby to be met by soldiers stationed at the reception desk.  Recognizing the person standing before them, the sergeant called the guards to attention and saluted the Dark Lord.

"My Lord," the man loudly proclaimed, "it is truly an honor to have the Minister of the Sphere of Ancient Knowledge here.  How may we serve you, My Lord?"

"At ease, Sergeant," the Sith responded, "I understand that a Lieutenant Talos Drellik is presently stationed here... where might I find him?"

Quickly checking the terminal in front of him, the sergeant's face went from stoic to almost sad as he replied, "My Lord, it seems Lieutenant Drellik is assigned to the records department on  sub-level 21, storage area 15, I'm sorry to report."

Why are you sorry, Sergeant," the woman inquired, "is there something I should know about that area?"

"We call it 'the tombs', My Lord," the sergeant answered, "seems like everybody they send down there either goes mad or commits suicide.  It's where they send people they want to disappear but can't  justify outright executing them."  Then the man added, "on the bright side, he's only been there ten days, so he's probably still doing OK.  I'll be honored to escort you if you wish."

Returning to the man, Zefaara said, "that won't be necessary Sergeant, just give me some directions and I'll find it. And Sergeant, I would appreciate it if he's not told I'm coming."  After receiving an affirmation from the soldier, Zefaara once again spoke to him, "thank you Sergeant, you've been a great help", then turned down the hallway toward the only elevators that went to that area, the freight lifts.

Finding the storage room she was searching for, the woman entered to find a man sitting behind a desk in the poorly lit room, upon which where large stacks of datapads.  Leaning against the stacked boxes, Zefaara loudly cleared her throat and waited for a response.  Without looking up from the datapad he was reading, the man motioned at the space on his desk and tersely replied, "yes, yes... whatever you have, find a spot and set it down and tell whomever sent you I'll get right on it.

Upon hearing the man's irritated dismissal, Zefaara decided to follow his instructions to the letter and sat down in an empty spot on the desk.  Noticing out of the corner of his eye the rather shapely posterior that now occupied his desktop, the lieutenant became even more irritated and before looking up to see who was there, began to shout, "what is the meaning of this, what is it you're... ... ..."

As Drellik looked up and saw who it was, his words faded immediately as he jumped to his feet and ran to the front of the desk to prostrate himself before the Dark Lord.  "Please forgive my outburst, My Lord," the man begged of the Sith, "had I acted appropriately and acknowledged your presence, I assure you it never would have occurred!"

Realizing she had upset one of the few people she considered a friend with her prank, Zefaara stood quickly and placed her hand upon his shoulder and softly replied, "it's OK Lieutenant, you once said I seemed to have a slightly dark sense of humor, it appears you may be right," then added, "it's me that owes you the apology, my friend."

Rising to his feet, the man thanked the Sith for her understanding and kindness as she walked around and took a seat in the desk chair.  Looking up at the man, Zefaara asked, "so what happened, who did you make so angry that they transferred the Empire's most brilliant and talented archaeologist to this forsaken posting?"

Standing before the Dark Lord, the lieutenant began his story, "it seems that I may have irritated Colonel Bragen by withholding certain finds I made from him," Drellik stated before continuing, "I had heard through rumor that he was selling some of the artifacts I discovered to the White Maw pirates there on Hoth.  After I investigated a bit more, I found this to be fact, though I could not officially prove it."

As the man paused, Zefaara gave a nod of acknowledgment and the man went on, "I began feeding him small trinkets, nothing of any true historic value and it appeased him for awhile, until one day a spy he had saw me discover the item I've desired above all else to find, for so long."  Again stopping for a breath, he went on, "I was able to secure and hide the item where he could not find it.  He became furious and was going to have me brought up on some bogus charges that could have me executed."  Again the man halted briefly before continuing, "knowing that even if I did receive death, the truth would surface about his dealings,  So... I got sent here to quiet me and I'm sure in the long run, insure my demise."

Excusing himself for a moment, Drellik walked over to one of the locked containers at the foot of the bed that also furnished the room.  Rising from the chair, Zefaara, followed the man to see what he was doing when the lieutenant stood up and turned, holding a small unadorned wooden box in his hands.   Looking Zefaara in the eyes, the man proudly proclaimed, "this is why I was sent to this hell hole and would do it again... ... ..."

Super pt 6. Great description on it.

First off, congratulations for being chosen as AOM for November 2020!

Excellent writing and use of images.

Speaking from personal experience, your settings and story arc for Lt. Drellik posting would certainly fit real life of what could happen when you piss off your C.O. in the military.

Wonderful writing and a very enjoyable render. When I try to write even a small amount of what you did here, I spend hours finding and correcting typos and grammar errors. You are to be commended. Well done.