Packing It Up, Pt. 4 by MioraaNyte 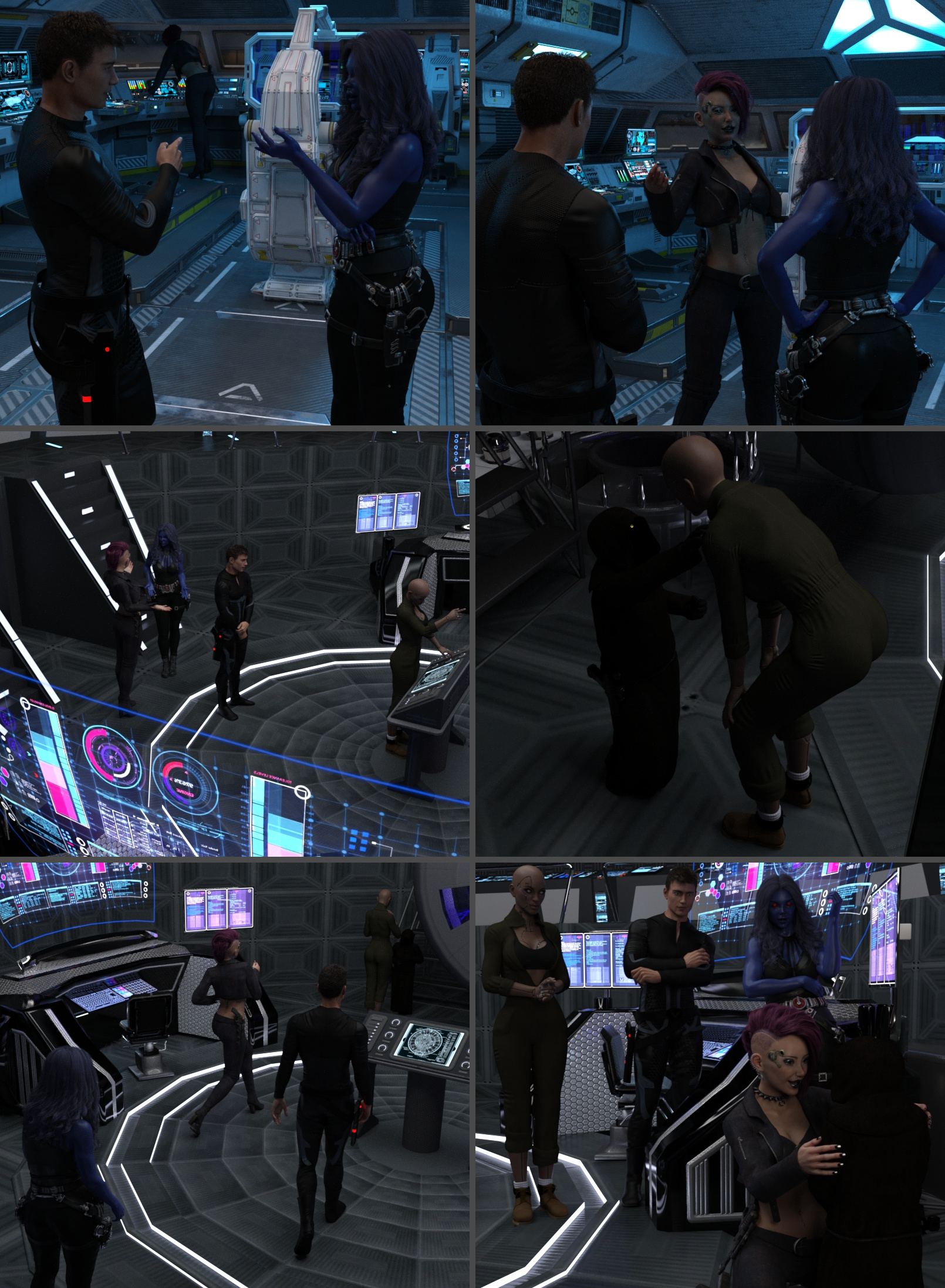 Leading the women to the ship's bridge, the Commander told them to feel free to examine the area.  After a quick look over, Malorva turned to the man and said, "it does look impressive, but how does it fly?"

Responding to the woman's question, he spoke, "I haven't the slightest idea, that's your job to find out," then pointing to the pilot's chair, went on, "I suggest you take the next couple of days familiarizing yourself with the controls and systems.  I was told by Nox that you're the best pilot in the galaxy, hope she wasn't exaggerating... Captain."

"Don't worry Commander, I'll fly this beast... if it doesn't blow up on us before we break atmosphere," then with a bit of aggravation in her voice added, "and don't call me Captain.  You can call me, Mal."

About that time, Mako approached the pair after she had looked over the computer systems.  "I don't believe this, Boss," she addressed the Chiss woman, "this thing's frakkin' amazing!  It's like all its tech systems were built custom for me," still speaking in an excited tone, "I was able to integrate my implants into its matrix with absolutely no problems... this is going to be sweet!"  Catching her breath, Mako continued, "I mean this thing's got more firepower under its skin than most light cruisers.  And its speed is almost twice that... c'mon, we've got to go check out the engine room, I got to see those babies!"

Amused by the woman's demeanor, the Commander said, "follow me, and we'll do just that, Mako."

Leading the women down the passageways to the engine room, the Commander once again spoke, "I've been told the ship uses an element called 'Isotope 5' to power it.  Supposedly its a very rare element found only on Makeb and has as much energy in twenty-five grams than a kiloton of the standard Rhydonium fuel used in capital ships."

"I thought Makeb blew itself apart," Malorva interjected, "or at least that's what the whole galaxy believes.  It's not even on the star charts anymore and it's said the remaining system is too radioactive to go within a light year of without being fried."

"It obviously wasn't Mal," the man replied, "seems our friends on the Dark Council decided not to share that information with everybody," then added sarcastically, "imagine that."

Upon entering the engine room, both women were astonished by the lack of machinery and noise present, being accustomed to such areas on other vessels.  "This is it?" , Mako blurted out, " you've got to be kidding!  I've seen galleys with more hardware."

Standing at a control panel, the Commander found Lexi watching the readouts and asked where he might find his new engineer.  Pointing toward the reactor, she replied, "he's up there making adjustments to the manifolds, sir."  Seeing the data show a drop, Lexi called to the unseen person, "go back a micrometer, the levels are beginning to drop," still watching the controls, "that's it, stop.  Systems are now running at 99.746% efficiency... amazing."  Calling back again to the person, "computer projections calculated the highest level obtainable were no more than 95.382%."

From above and behind the reactor, an unmistakable voice of a Jawa responded, "stupid thinking machines not know everything."

As the diminutive creature came down the access stairs, Lexi met him at the bottom, bent over to look at the Jawa and retorted, "I take that as an insult, remember, I'm a thinking machine, too."

Reaching up to put his hand on her shoulder, the Jawa said in a apologetic tone, "not mean Lexi, Lexi super smart.  Blizz sorry he make friend Lexi feel bad."

When hearing the Jawa mention his name, Mako suddenly broke into a run toward the pair, "Blizz!" ,the woman shouted, "is it really you?"  Dropping to her knees in front of the small creature, Mako reached out and began hugging him and in a happy cry, exclaimed, "it is you!  Oh little buddy, I've missed you so much!  We thought you were dead after falling into that crevasse on Hoth, how did you get here?"

Replying to the woman, Blizz answered, "Blizz, not dead, but hurt real bad.  Crawled out of white sand hole and was found by funny Twi'lek woman and scary-eyed Sith man.  They took Blizz to their space crawler and bring him here to get well."  Continuing, Blizz added, "when Blizz get fixed, Sith boss lady give job working with head Ugman making space crawler.  Blizz happy to see pretty friend Mako."

By that time, the Commander and Malorva had joined the reunion.  Leaning against the side of a console station and in a nonchalant tone, the woman stated, "well I'll be a monkey lizard's aunt, you're alive after all.  Good to see you again, little guy."

With a slight groan, Malova turned to the Commander and whispered, "now I'm really worried we'll blow up..."

Very cool work on this page. I don't know if the scenes were intentionally dark or maybe issues with the lighting.

still, this is wonderful.

I tried not to make the areas where direct light would be blocked too light and have to admit they did turn out a little darker than I would have like.

The first four panels were made on my old Win7 machine with ATI card and took over 10 hours each to render... so I took what I got.

The last two were done on my new Win10 with Nvidia card and took less than one hour. Hopefully now I can produce a little faster and with better quality.

Thanks for the input Mike!

each panel is very well designed. great pov and prop use.

Your ability to tell a story with both words and images is remarkable.

Wonderful story telling and the panels are top notch. I really like the lighting and ships layout. Well done.