So It Begins, Pt. 2 by MioraaNyte 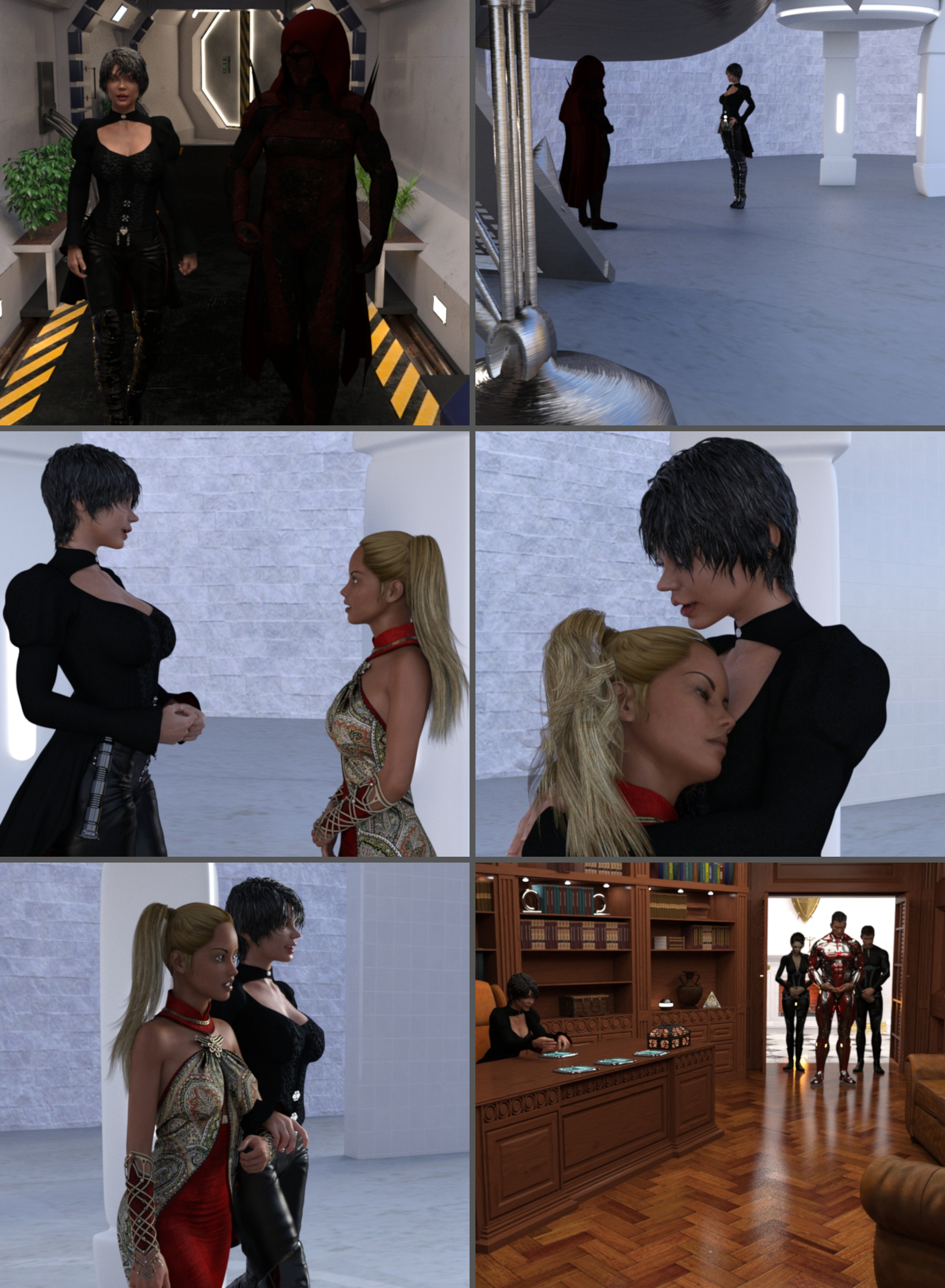 As the pair walked down the corridor towards the private shuttle landing area, Marr once again turned to speak to his colleague, "it seems you may have another ally on the Dark Council.  Darth Vowrawn has expressed interest in your attitudes toward slavery and non-human species in the Empire," then pausing briefly, continued, "an opinion that he and I have shared, along with you, for many years, now."

"I do recall that after I defeated Thanaton, though he did not seem totally approving of my ascension to the Council, he did not disagree with the result of the Kaggath, either," Nox replied, adding, "I've never truly spoken to the man, other than during Council meetings.  Other than he is the Minister of the Sphere of Production and Logistics, I really know nothing about him."

"Do not let his charm and benign outward appearance fool you, Nox.  Vowrawn did not become a member of the Dark Council over thirty years ago by playing nice," cautioned Marr, "he is a master of guile and strategy.  When needing to be, he is utterly ruthless, possessing no pity or remorse."

Arriving at Marr's private shuttle, before departing, the Dark Lord turned to say his final words, "I will send you a dossier on Vowrawn when I return to my base.  In the meanwhile, we'll consider him a still possible threat to our mission, I'll keep an eye on him and keep you current on events."  As Marr boarded the shuttle and the door began to close, he called back, "the future of the Empire rests with the actions we've set in motion.  May the Force serve us well."

Watching as the shuttle took off and began to disappear into the clouds, Zefaara began to leave the launch area when she was met by Mayla, her beloved friend and self-appointed handmaiden.

"Forgive me Master, I did not mean to eavesdrop," the young woman meekly spoke, "but is it true... are we finally leaving Dromund Kass?"  Then speaking again to her benefactor, voice slightly cracking from tears of joy, "we're going home?"

Taking the woman-child into her arms, embracing her tightly, Zefaara softly cooed, "yes, my dear, sweet friend... we're going home."  As both women stood there for a few minutes, Zefaara hugging Mayla, as only a loving mother could her own child, the Sith gently spoke, "come Mayla, we have much to do in the next four days."

With their arms locked, the pair slowly walked toward the area's exit, Zefaara once again speaking to Mayla, "I need you to do me a few favors, find Trego, the Commander and Omega.  Have them report to my study at 1430, then get the word out to the group, that I'll be addressing them via holoterminal this evening at 1800."  As the two reached the point where their ways parted, Zeffara once again lovingly embraced the young woman, saying to her, "then there is one more favor I want you to do."

"Anything Master," Mayla responded, "you only need ask."

"With a smile on her face and a small chuckle, Zefaara responded, "I was hoping you'd say that."  Looking Mayla in the eye with a mock seriousness, the Sith went on, "after you've done the first things I asked of you, you are then to take the rest of the evening off.  You are to relax... take a nice hot bubble bath, grab a nap, go to the pool, go see Syreena and learn how to play sabbac, anything your little heart can dream of... but under NO circumstances are you to do any work!"  Then releasing her embrace and holding the young woman at an arm's length, raised her other hand in a scolding gesture, stating in a whimsical manner, "don't make me give you a command, now go and do as I said.  No back sass."

As both began to laugh like little girls, Mayla dropped into an overly dramatic curtsy and replied, "yes Master, your words and will are  my own," then ran down the corridor to complete her assigned tasks.

Watching as Mayla gleefully ran to do her bidding, Zefaara released a sigh of relief from the powerful emotions that had engulfed her when with her young friend and whispered to herself, "what is it about her that brings out so much peace and joy when she's around?"

Sitting in her study and reading the datapad Marr had given her earlier, at exactly 1430, stood the trio she had asked Mayla to summon, heads bowed in deference to the Dark Lord of the Sith.  Without looking away from the datapad, she acknowledged their presence and spoke while motioning to the datapads on her desk, "please,come in and take a datapad.  Have a seat, make yourselves comfortable.  There are refreshments in the cabinet behind you, feel free any time."  Then looking up at the threesome and noting a look of uncertainty on their faces, she smiled warmly and went on, "please, I want you all to relax, I have received joyous news and time is limited.  We'll have much to do in the next few days, I suggest you take a break while you still can.

Reassured by her words, each retrieved a datapad and had a seat on the plush furnishings.  Smiling again at her entourage, Zefaara addressed the group, "the day has finally arrived, a new era for the Empire and a fresh start for its people is about to begin in this room..."

Wonderful sequence here that illustrates the story so well. I can't even imagine the level of patience it takes to do work like this (not my strong suit at all). Awesome. :)

Trust me, it takes a lot more patience to produce the images than the narrative (I almost have the story lines drafted in my head days before).

I'm working on an 8+ y.o. machine with an ATI graphic card doing Iray... Job ain't got squat on me! LOL

Your patience and hard work really pays off, wonderful story and images!

Since I began reading your Star Wars based tales, I've really gotten into the story and lore of The Old Republic.

A splendid series and a marvelous run of support images! Most excellent work!

Great story line you've got going, and your illustrations really do make it easy to follow the narrative.

You are wonderful in your graphic presentation and your writing skills. Well done.

great part in your story telling!

Another marvelous image group and story for this series. Superb set of images panels.

Thanks Steve, it's always nice to hear from you.

As always, I am impressed by your writing skill and use of images to illustrate the story line.

Fascinating! Excellent story. It does take some real imagination to come up with an illustrated story of any kind. This one is done really well.

Inspiring, so much detail and thought goes into this!