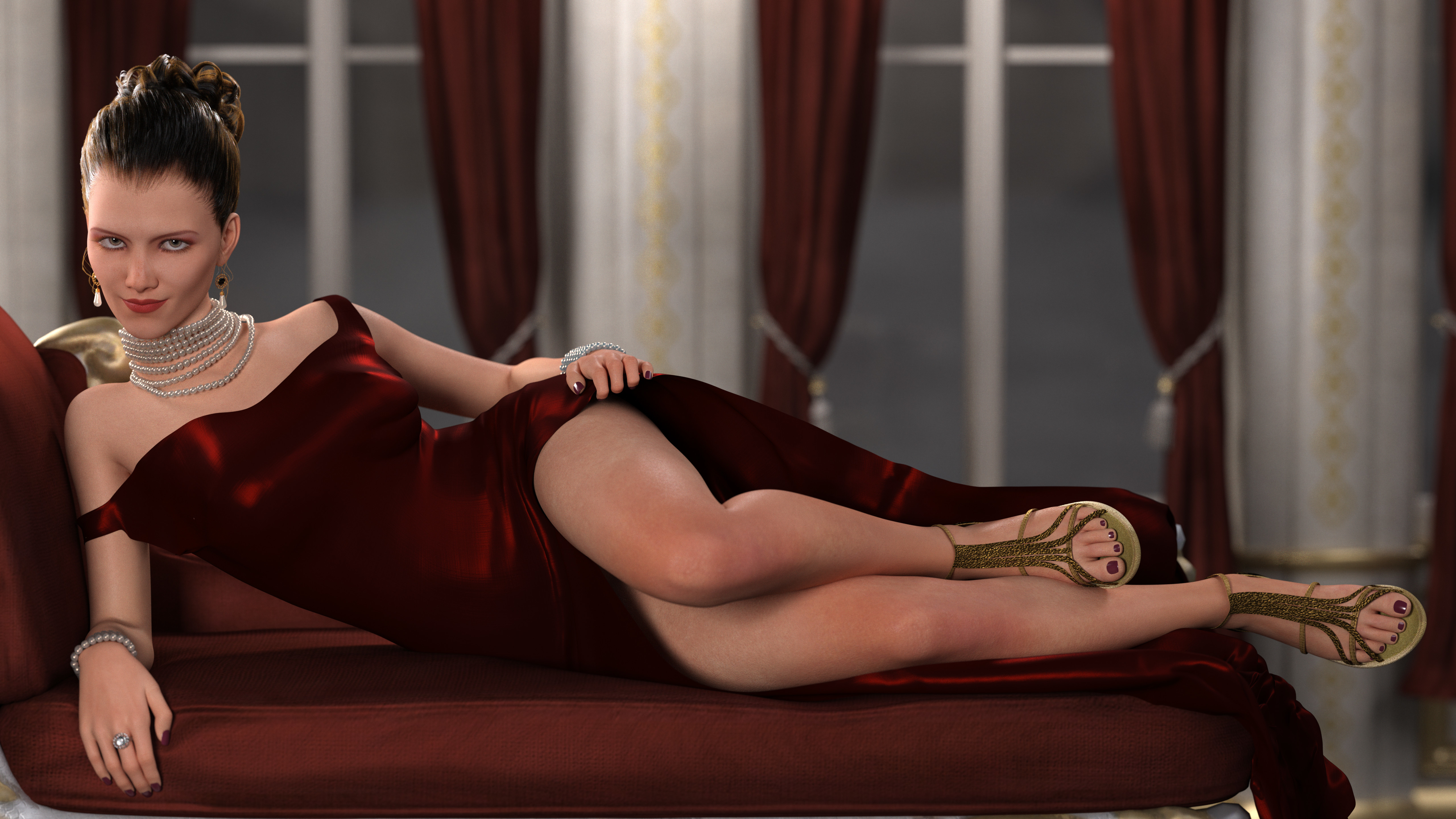 This began as a quick project, designed to be completed in a few hours, but ended up being six days (lots of test renders). It had been awhile since I rendered anything in DAZ or Poser and I wanted to replace my aging desktop render (from 2013). I initially set out to make her a femme fatale, but the only Noir-like wardrobe I had in my DAZ library was Sultry Silk Dress. However, I did not really like the poses that came with the dress so I made my owng, then I used a combination of Deformers to force her dress to behave as it would be if she was laying down, and used the mesh smoother to make it conform to her and contact the surfaces better (I really wish DAZ Studio had dynamic clothing and soft body physics). However, my initial rendering of her was meh, because she did not have any jewelry. I bought the Duchess Pearls set and realized that this made her look like a wealthy woman, so I decided on the current name and went with a baroque setting. After rendering her once, I realized that her skin looked almost painted on (original for comparison: https://www.renderosity.com/mod/gallery/?image_id=2769157), even when using Iray's SSS materials. I dug into some research papers about skin optics. Skin, being made mostly of water, scatters light preferentially forward, and depending on the substance within the skin, the degree of anisotropy (forward or backward scattering) ranges between 0.7 and 0.9. Source: https://pdfs.semanticscholar.org/412f/4ee7284bc9023a4eb2befca7f937b45701f0.pdf I used an SSS direction of 0.7. Blue photons (at 450nm) will travel 0.1mm into the skin; Green light (at 550nm) will travel 0.6mm; Red light (680nm) will travel 3.5mm. That meant changing the Scattering Measurement Distance to 0.35 (Daz world space uses cm) and the Transmitted Measurement Distance to 1.05, then making the Transmitted Color mainly red (R=220; G=68; B=5). Source: https://scontent-ams3-1.cdninstagram.com/t51.2885-15/e35/19121661_1360733080680733_1167099951860154368_n.jpg?ig_cache_key=MTU0MDM2MjY1NjQyNTYwNTgyMg==.2&se=7 The skin has various substances with IORs ranging between 1.37 and 1.50, so I used 1.45 as a "mean" value (I really wish Iray allowed for 5 or 6 individual layers with separate IORs for greater accuracy; I could not use Geo-Shells because this render pushed my 980 ti to its VRAM limit as it was). Even though the Refraction Weight is at 0, it is still used for SSS. The skin's surface only scatters 6% of the light, with the rest of it being scattered from within, so I set my Translucency Weight to 0.94 and set its mode to Scatter Transmit Intensity. I preserved the surface details by using Diffuse Overlay Weight, setting it to Squared and setting that to Scatter-Transmit Intensity as well. I set the Bumpmap value to 6.00 To simulate the layer of sebum, I set Top Coat Weight to 1.00, Top Coat IOR to 1.43 (Sebum's IOR), Top Coat Roughness to 0.45 and Top Coat Bump to 4.00, then used the bumpmaps for the Top Coat Bump. Finally, to make the Sebum a physical layer, I set Top Coat Thin Film to 5000 (5 microns) and made its IOR the same as regular Top Coat. But wait, there's more! I did not want to stop at just the skin. I also wanted reasonably realistic eyes. The Sclera (white) reflects 90% of the light, while 10% is scattered into it (with an anisotropy of 0.9), meaning 10% translucency, SSS at 1.0, SSS Direction at 0.9 and the Transmitted and Scattering Measurement Distances at the same as the skin. This made them appear too white in the render, so I compensated by setting the Diffuse to 0.8 in the R, G and B channels. Source: http://optics.edu.ru/_media/optics/staff/bashkatov/bashkatov_o-s_10_197.pdf The Irises use similar settings, but with 20% translucency. The Cornea uses no texture except the eye transparency (so the cornea model's borders do not appear on the iris), and is set to Specular-Glossiness mode, with Glossy Weight at 1, Glossy Reflectivity at 1, Glossy Color at white, Glossy Roughness at 0, and Refraction Glossiness at 1. The Refraction is set to 1.38 and Refraction Weight is set to 1. The Eye Moisture is exactly the same, except with no texture and the IOR at 1.34 (salty water has an IOR slightly more than fresh water).

I love her expression. Beautiful work.