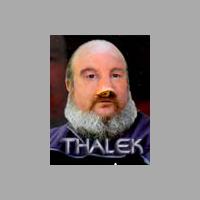 At age 51, I'm a complete newbie in Poser, which I originally purchased so I could do virtual background performers for Star Trek: Hidden Frontier, a recently-ended fan film of which I was part.<br /> Alas, I didn't learn fast enough, so none of my work was usable, although we do have some Poser background- and stunt-performers in our last few episodes, thanks entirely to Dan Crout's work.<br /> I am still trying to learn how to use Poser because now we're making another fan film series, and it would be nice to have some extras that didn't take up space on our limited green-screen stage.Â  :-)<br /> I have a few pictures uploaded that people have been kind enough to comment favorably upon, even though I have stood on the shoulders of giants to "create" them.Â  So far, I have done little but create a few facial expressions, tweak the light settings a bit, and occasionally bend a head or a hand from someone else's prepared pose.<br /> My sole production so far, a Deep Space Nine era comm-badge, took me months of frustration to create, and I have yet to upload it as a freebie.Â  I should do that soon.<br /> I owe the community of Poser artists far, far more than I am likely to ever be able to return, and for that, I apologize.Â  (Speaking of which, many thanks to Lady Annika for creating my avatar!)

Thalek posted a new gallery image California poppies on a sunny May day.