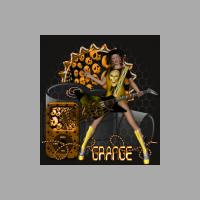 A good friend pointed out that I didn't have a bio once, so I created one. Now I suppose I'd better update it. I am early 50's but they're not getting any earlier. Married with 3&#160;young adults and currently have expanded my cat collection from the original three cats who argued over who owned me in the way that tom cats do best, causing my wife great consternation at the amount of clothes I go through in a day :) to nine , my four toms now, and my five affectionate queens. I got into poser by accident, getting poser 3 on a cover disk from Computer Arts magazine, but left it sitting with a whole load of other stuff until I got Daz 2, by accident and couldn't figure out how to work it. Luckily I was given poser 6 and after a few attempts finally figured out how to put clothes on Victoria (Poor girl was frozen and fed up hiding behind trees to spare her modesty) and then the world of 3d was my cardboard box. I was lucky in that I found a nice bunch of people who allow me to bug them with my weird sense of humour, while subjecting them to my images about a year after I found here. I am by no means an expert in poser, or vue (another coverdisk file sparked me into that) or any of the large array of shiny things that have kept me enthralled by 3d, but I am getting a bit better at it as I need something to do with all my throwaway backgrounds

Grangehearts posted a new gallery image We Will Remember.

Grangehearts posted a new gallery image On a pale horse.

Grangehearts posted a new gallery image Let Me Down Easy.