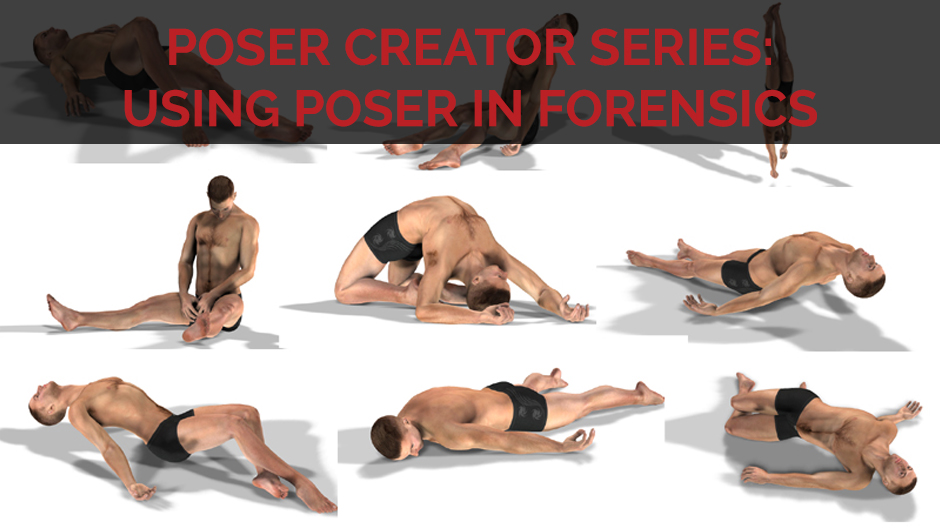 A picture says a thousand words and that's as true in court as anywhere else.

When court cases regardless of jurisdiction are presented, it often helps attorneys, judges and juries to visualize incidents when experts present their theories with the help of computer aided design, like Poser Software.

After a crime occurs, some scenes are hand-drawn in rough sketches, while others are documented by detailed diagrams or even 3D laser scanners. Those details can then be imported or recreated in a 3D modeling program. The renders can be used by experts to recreate crime scenes, reenact vehicle crashes and other events that would normally just be verbally described.

Typically, scene diagrams are created in 2D, especially if they are hand-drawn. But with Poser, experts can easily demonstrate theories of the case with 3D models and animations.

"While 2D sketches and models are useful for presenting the spatial information collected at scenes, 3D models can be more effective at communicating such information," said Elissa St. Clair, a special agent at Naval Criminal Investigative Service.

One scholarly article from 2011 by Michael J. Bolliger, Ursula Buck, Michael J. Thali and Stephan A. Bolliger went further saying: "Details might easily be omitted or wrongly imagined. Graphic presentations, in particular 3D models, certainly produce a better common basis between the viewer and the interpreter.

"The presentation of a complex sequence of events in written or oral form to members of the court and the jury may be difficult for a forensic examiner," Bolliger et al. said, adding the easiest way to convey ideas to a criminal juries is with a pictorial representation. It also helps by showing the scene from different angles and with translucent objects when needed.

"Traditionally, and still in some countries, the verbal descriptions of the autopsy findings was supplemented with line diagrams on pre-printed outlines of bodies and photographs from the procedure. Now, in an attempt to prevent jurors from having to look at distressing photographs, there is a move towards illustrating the relevant autopsy findings in a different way," Jones said.

The diagrams are used to explain to laypeople on juries injuries and the significance of the wounds, which can be distressing for some when graphic photos are used.

Instead of using autopsy photos, they now use a blend of photographs, Poser, and 3D anatomical models from BioDigital Human "to create views of the body that make sense for the specific case being heard in court," he said.

"Most of the time that will mean views of the front and back of the body, or three-quarter profile views of the head/ face, whilst others may need the body model to be posed in a particular way, to resemble a seated person, for example," Jones said.

They can recreate the individuals by varying skin tomes and body shapes using the tools in Poser. Post-work is done in Adobe Photoshop to add shading and coloring on injuries.

"When in court we take the jury through each individual injury, and so the injuries depicted in the illustrations are numbered for ease of reference. Using Poser models enables us to show the distribution/ pattern of injury which may be particularly relevant to distinguishing between an assault or an accidental fall," Jones said.

He said he has even taken the Poser renders to the medical school at which he teaches.

"The Poser-based illustrations are perfect for teaching aids, and these now form the basis of teaching, supplemented by cropped photographs where necessary," Jones said. How to get the most out of Poser's dynamic clothing

Vendor of the Month for July - Sveva