A Suprise For Van at The Waterpark by CoolDimension 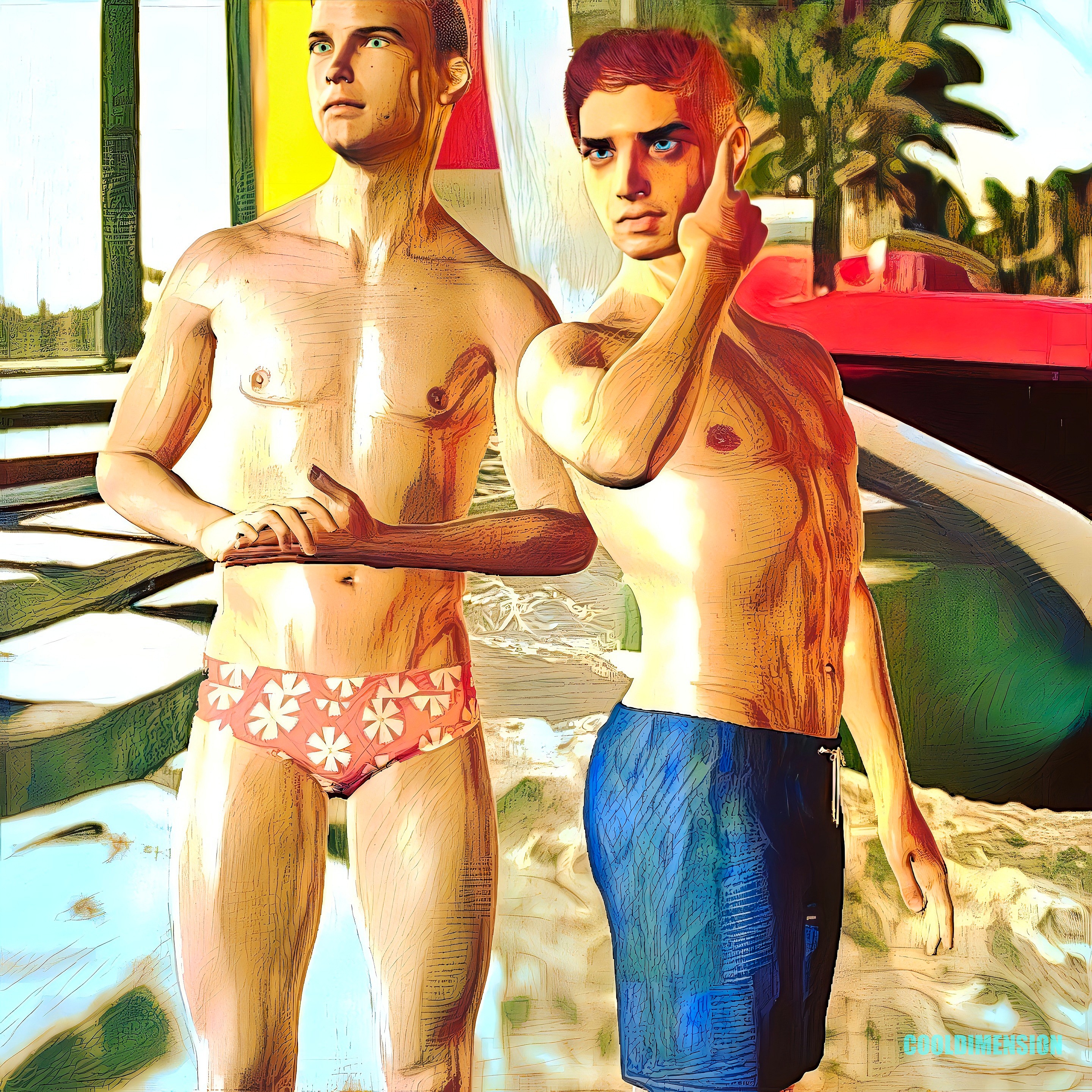 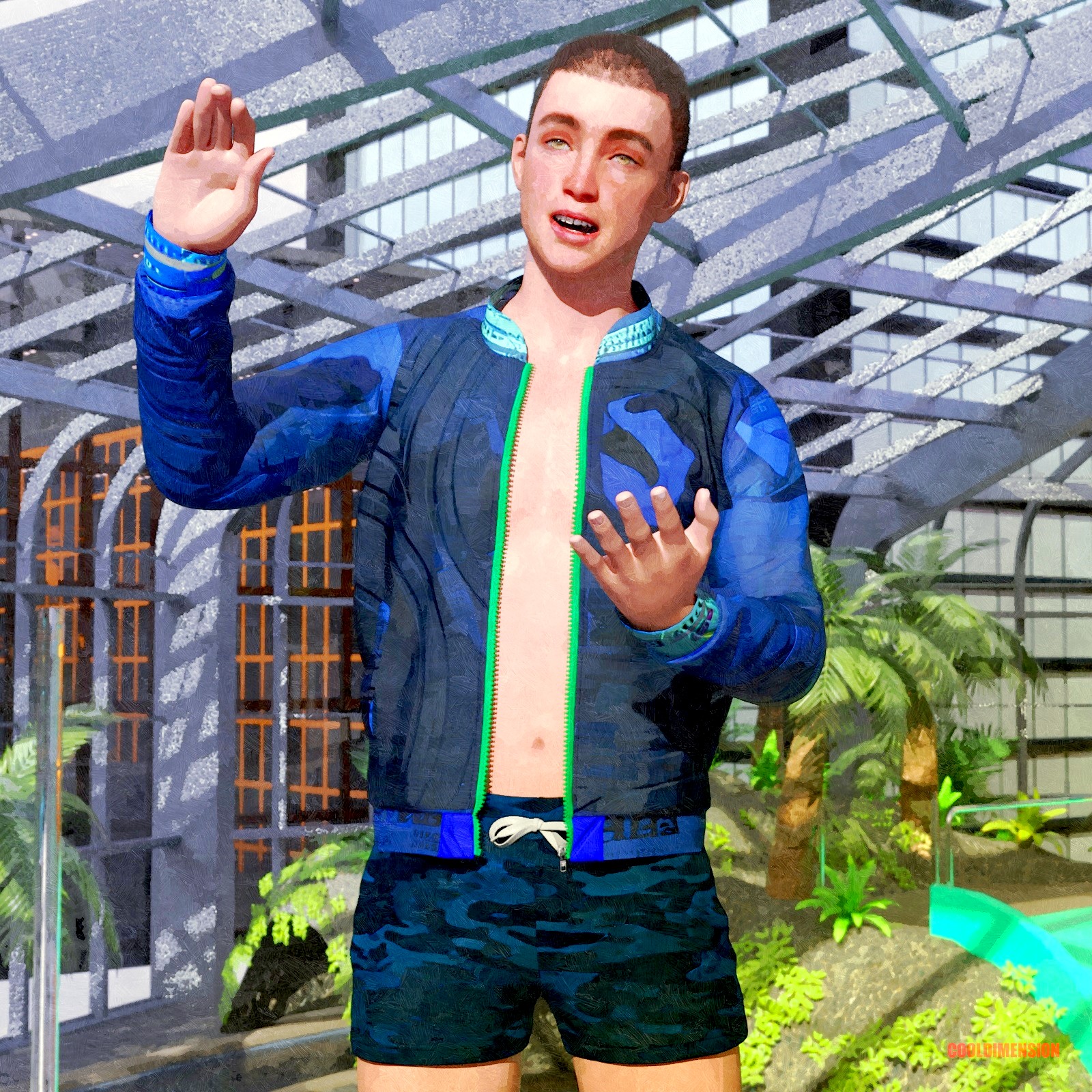 "I can't believe you wore those swim-trunks!" Cadet Avery said to Cadet Van Artell as they walked through the Capital City Aqua-park. The Aqua-park was bustling with people relaxing and having a good time. "What?" Van answered. "What's wrong with these trunks? They look good on me!" Avery Goldman rolled his eyes and let out a sigh. He had tried so hard to talk Van out of wearing them, but he just wouldn't listen! "They're too small! Mab is a life-guard here and even he doesn't wear little shorts like that. It's just like I told you about wearing your wrestling singlet pulled half off, nobody wants to see that!" Avery said in a scolding tone. "Stop it, Avery!" Van answered. "I like being seen! I'm in good shape and I want everyone to know it!" Avery smiled. After the severe brow-beating Van's Father gave him, Van had been like a broken soul. He had even insisted on fulfilling his bet with Avery by being his "servant" for a month. Avery was secretly pleased that Van was fighting back a little at his criticism without falling apart. "Okay, but just remember... I warned you!" Avery said as the they walked up to one of the water slides. "You might attract the kind of attention you DON'T want!" Van stopped and looked around. People were staring at him. "Maybe Avery is right!" Van thought. "I've tried so hard to please him. I can't believe he has become like a friend to me. I hope he really likes me! I just can't fail, again! I can't!" Van's mind raced with memories of the last few weeks. The loneliness, the despair and the never-ending tongue lashings his Father had unleashed on him on video calls and cyber-visits, His father had made clear what a worthless failure he was! Even worst was being ignored by all the cadet's at Empire Star Academy. It was like he didn't exist. Things were so much better now that he was spending time with Avery everyday! Van tried to push away the realization that Cadet Avery Goldman had come to mean everything to him! Van's feelings were entirely platonic, but desperate in the sense that Avery had become a lifesaver for him. His friendship meant somebody cared about him, and not just want he could achieve or accomplish! "How can you afford to bring us here, Avery?" Van asked. "I saw that you already had the tickets when we got in. Do you want me to chip in some credits?" Van was worried that Avery had spent too much. He knew Avery didn't have much money. "Thanks, But it's okay!" Avery answered. "I got free passes from Mab! Like I said, he is a lifeguard here!" Van shuddered. He hated Mab with a passion! Mab was the guy who defeated him and won his planet's scholarship to Empire Star Academy! "Because of him, I lost my Father's respect and I lost my girl!" Van thought. "How does he get to do that?" Van asked in an angry tone. "None of us are allowed to miss classes and work an outside job! What makes this Mab so special? Plus, He's only a first year cadet, like us!" "Emperor Grell wants the military doing more public assistance work, so it's training for that!" Avery answered."I guess they picked Mab because he's the one of the best at the Academy, at well...just about everything!" Van tried to turn off the angry, dark feelings that were welling up inside him. He didn't want to think those ugly thoughts about getting revenge on Mab and his friends that had become an obsession for him recently! Suddenly, Avery made a gesture with his finger, pointing up at his head a few times! "Hey! Is he making fun of me?" Van thought. "Is Avery saying I'm stupid or mental or something?" "Look, Here comes Mab, now!" Avery shouted. Van froze as he saw Mab waving and walking towards them. Avery did his hand signal a few more times! "Avery isn't making fun of me, He's signalling Mab!" Van thought. "Why?" "That is why I got permission to come here, today!" Avery said. "Mab also teaches swimming here!" "What!" Van answered. "You mean...." "Yes! Colonel Harrington told me you can't swim very well!" Avery said. "And that the other Cadet's have been giving you a hard time about it! So we arranged it with Mab to teach you here, in a nice fun environment! See? The pool is over there!" Avery had been pointing to the class pool! Van was shocked! Take lessons...from Mab? The person he hated? The person he blamed for his downfall. How was Van going to deal with this humiliation? And when his Father finds out, would what little self-esteem he had left will be destroyed forever!? TO BE CONTINUED Background on main image made in Night Cafe. Characters got the DDG treatment! Second image some textures made in Wombo dream.

Oh heavens! Such intense emotions! How will they be resolved? Stay tuned, friends! The festivities are about to begin! Nice work on these images and the story! Bravo! Well done on all accounts!

Thank you so very much, Radar! I really appreciate your kind words! Wait until you see what happens to Van next and Avery has some big things happening in his future as well! Some big surprises coming! (Don't worry, Van isn't Mab's brother or anything!:))

Also, thank you so Very much for the "Like" and the "Favorite". It means a lot to me!

And Avery seems to be oblivious to Van's inner thoughts oh dear, the surprise is a mix of emotions!

Thank you so very much! I appreciate it! He is trying to help Van! But there is a lot going on that nobody knows yet!

Van's situation is what happens everywhere on a daily basis. We'll find out next time what he will or will not do.

Thank you so very much! I appreciate it! Van has reasons why he's a little "off". I will get to them very soon!

Hi, simply love your storytelling in graphics and words :)

That means a lot to me! Thank you very much for the kind words and comments!

Thank you! I really appreciate your kind comments!

This is quite a story you have going! It makes me curious what the next installment will bring! Fine illustrations!

Thank you so very much! I appreciate it! I hope you find what happens next a surprise!

An amazing image .. superb work on this one, I love the characters of your new image 👍🙋‍♂️

Thank you so much for the kind comments! I appreciate it!

Go ahead Van, take the swimming lessons from Mab...you will be personally better off because of it and just maybe your father will have a change of heart into what he thinks of both you and Mab! Avery seems to be the kind of best friend every person should have in their life. Excellent story and an amazing set of renders, all done in your own special style my friend! :-)

Thank you so very much, Johnny! I appreciate it! Avery is a great guy, and he is trying to help Van! Some big things are going to happen to all the characters very soon!

Thank you so much, Steve! I appreciate it very much!

Thank you so very much! i appreciate it, Starship64!

Gestures and faces are very expressive.

Thank you so very much, Nightwind! I appreciate it very much!

Thank you so very much, Rayag! I appreciate it very much!

I like the man on the right, very expressive scene !

Thanks so very much, I appreciate it!

Very nice! Good story. I wondered about the finger, but the story resolved it. Nice expressions!

Thank you very much! I appreciate it and thanks for noticing the little gesture of Avery's!

Thank you so much, Richard! I appreciate the kind comments!

A great continuation of this story - and as always, beautiful artwork to back it up!

Well, I think it would be better to have Mab as a teacher rather than that big guy in the dark helmet and cape... 😉

Thank you very much, Ute! I appreciate it!

Oh gracious, this isn't going to be easy for Van, but hopefully Mab and Avery can make him feel good about swimming lessons and not embarrassed about it. Surely Mab realizes that Van is not likely to be happy about having him a swim coach and will go easy on him, rather than rubbing it in! Cool art effects in both images!

Thank you so much! I appreciate it! Mab is very kind and doesn't really know Van, since Van stays away from him. He isn't aware yet of Van's feelings!