New Kid On The Block, Pt. 4 by MioraaNyte 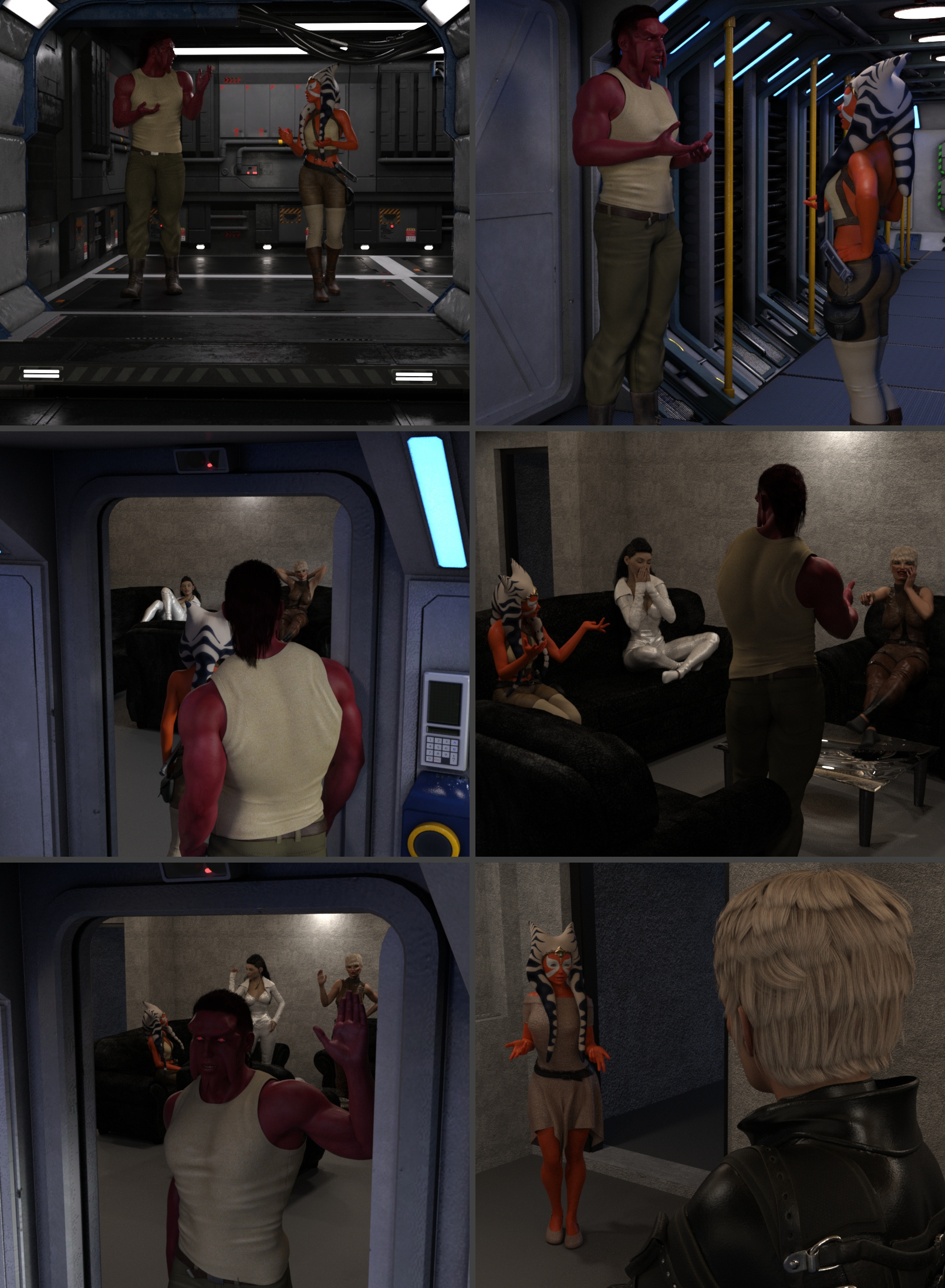 "Seriously, that's all you could find?",  Jeldark asked the girl in a slightly irritated tone as the pair walked down the corridor, "surely there must have been others to choose from."

"Upon my word as a Jedi," Ky'reyal replied, "I searched the whole cargo bay and that was it!"  As they reached the door of the quarters shared by her, her master and Dara, she blurted out to the Sith, "besides, what's the big deal?  It looks comfortable and you should be warm in that drafty hold."

"It's not that," the man said in an exasperated voice, "it's what it looks like."

Opening the door to the quarters, Ky'reyal shot back, "is that all you're concerned about... the looks?"

Hearing the duo in what seemed like an argument, Xin asked, "what are you two going on about, now?", as she went from her reclined position to seated, allowing her new padawan to sit beside her on the sofa.

"Oh he's up in arms about the color of the bedding I was able to find," the girl explained, "seems he's more concerned about the color than the comfort... so what, it's pink.  What's the big problem?"

"Pink?", Dara began laughing out loud and pointing at Jeldark continued, "the most badassed Sith in the Empire is sleeping in a pink bed?  Oh, this is priceless, I've got to see this!"

Unable to control herself, Xin put her hands over her mouth in a failed attempt to stifle her laughter as Jeldark said to her, "really Xin?  I expected this from the Captain, but I thought you would have been a little more sympathetic to my plight."

Apologizing to her friend for her response, "I'm sorry Jeldark, but the image of you wrapped in pink linens was...  c'mon, Dara's right, it was just too much not to be funny.  Forgive me, friend."

Addressing the man, Dara interjected, "relax, it was probably all she could find besides tarps and drop cloths.  I don't get a lot of extra passengers on the ship and I likely picked them up on sale somewhere."  Then standing, she continued, "we'll stop by a shop before leaving Haven and get you something different," then added in jest, "how about a nice lilac?"

Sighing with frustration, Jeldark responded, "you should take up comedy when you retire from piloting, Captain, you're a riot."  Regaining his composure, the man said to the three women, "why don't we get cleaned up and meet in an hour and a half to go to the cantina for dinner?", then went on as he turned to leave, "and I'll do my own shopping this time, thank you."

As the man departed the room, Xin looked toward Ky'reyal and instructed the girl, "go hit the shower while I see if I can find you something close to your size a little less conspicuous for you to wear," seeing her Padawan give her a quizzical gaze she added, "places we'll be going in the future, the last thing you and I need to give away at first sight, is that we're Jedi.  Might as well start now, take off."

Looking to her friend, Dara said, "there are two stalls in there, you and Ky'reyal use them.  I'll use mine on the ship, get dressed and be back when I'm finished."  Then as she too began to leave, told Xin, "check in the old storage closet, I've kept some of our old clothes from when we were kids there, you should find something she can wear.  Looks like we'll be doing some more shopping after dinner," then added with a chuckle, "perhaps I'll become a comedian and a fashion consultant after I retire... later, sweetheart."

About forty-five minutes later, the Captain returned to her quarters just as the young Togruta woman came from the bedroom dressed in her 'new' clothes.  Standing there for a few moments, Ky'reyal then asked, "what do you think Captain, do I look okay?"

A bit amazed by how the young woman's wardrobe almost made her appear as a totally different person than she saw only a few minutes earlier, the Captain replied with a smile, "Ky'reyal, you look absolutely wonderful.  No one would have ever guessed that underneath that drab Jedi garb, there was such beauty."

Feeling slightly embarrassed by the woman's words, the girl replied, "this feels so strange.  At the temple we're taught that you should dress simply and not in a manner that could provoke intimate emotions from others."

Sensing her discomfort, Dara reached out and holding Ky'reyal by the shoulders, took her to the mirror in the room so she could see her reflection.  Allowing a few moments for the girl to view herself, Dara softly said, "there is nothing wrong with being beautiful and showing that beauty.  You will never be able to control the thoughts of others completely, even with your Jedi powers.  There will always be people that will feel those emotions even if you were wearing a canvas bag."  Watching the girl study her image, the woman added, "we're going to be running into situations the Jedi won't have prepared you for and sometimes being pretty can be a big plus at the moment.  It's one of the main advantages we women have had since time began over the male population of the galaxy.  Now let's go have a seat and wait for Xin."

After almost another forty minutes of waiting for her friend to finish dressing, Dara began to grow impatient and called out, "Xin, we're going to be late meeting Jeldark... want to put a rush on it?"

Still out of sight in the bedroom, the Jedi replied, "why don't you two go ahead?  I'll meet everybody shortly at the cantina."

As always, an amazing story line and exceptional images to tell the saga.

Looking forward to the next installment.

Had a good laugh on the Captain's line: "the most badassed Sith in the Empire is sleeping in a pink bed?..." Almost blew my tea out of my nose. 🤣

Wonderful chapter and images for an amazing story.