New Kid On The Block, Pt. 3 by MioraaNyte 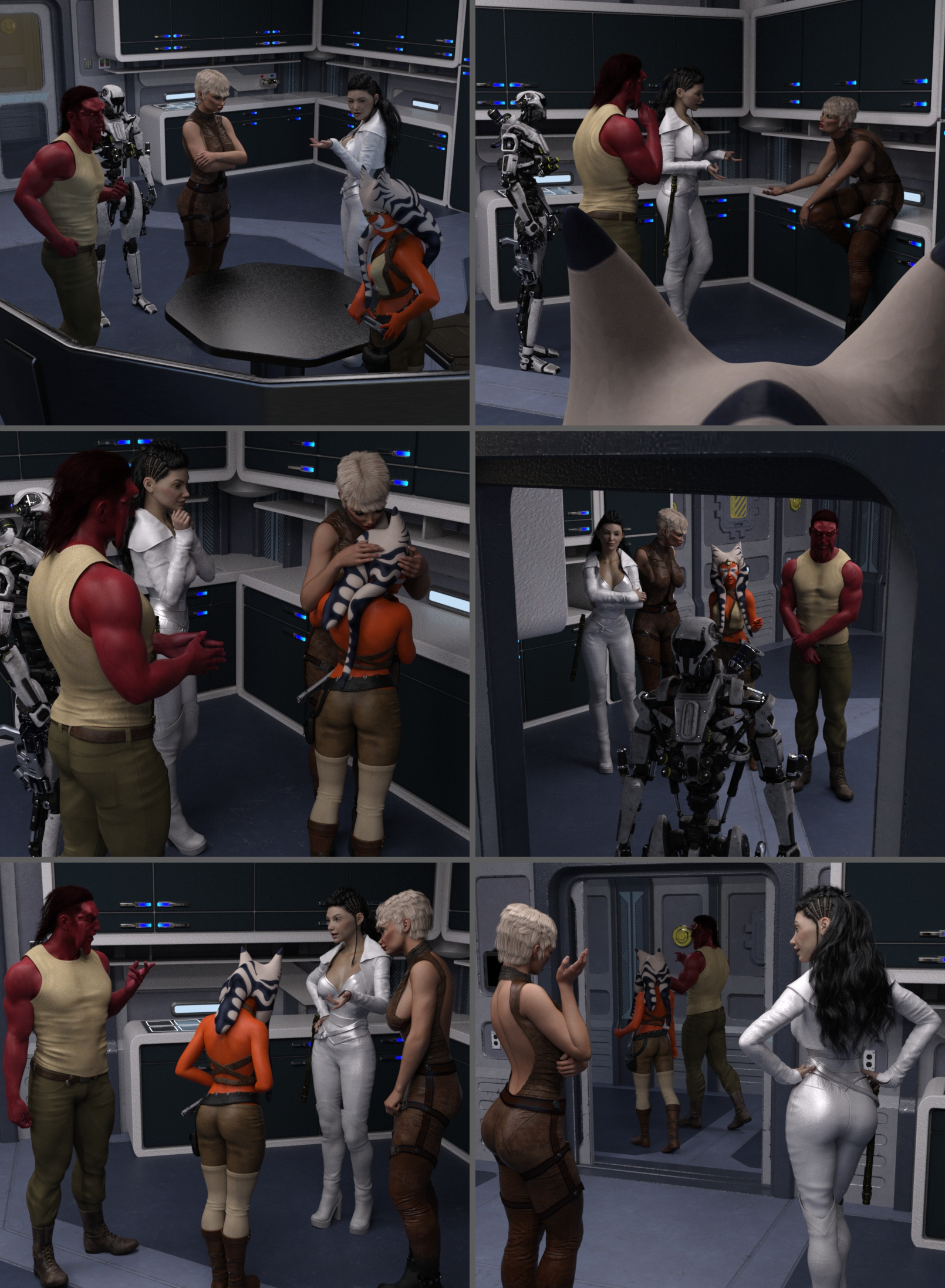 "This is my new padawan, Ky'reyal Tano," Xin responded to her friend's outburst, "it seems that..."

"Your new what?" ,Dara interrupted, still irritated by recent events, "you've got to be kidding me!  How in the hell did you end up with a padawan out here and how did she find you?"  As Xin was about to answer, Dara once again preempted her with a sigh of resignation, "never mind, I know how she found you... Nico told them you were here."

"Why would he do that?" ,Xin questioned her friend, "he does realize that Jeldark and I are wanted fugitives.  I thought the whole idea behind Haven was anonymity and a clean start... kind of hypocritical of him to let Grandmaster Shan know we're here."

"Cool your jets a second, honey," Dara responded then asked, "are you talking about Satele Shan?"  After getting a nod from her friend, the Captain continued, "makes sense now.  Those two have been best of friends since the day he helped her and Jace Malcom escape from Korriban when the Sith Empire returned to reclaim it.  He was worried about you and he knew if he let her know you were alright, she would keep it quiet.  Besides, he probably owes that woman more favors than there are stars in the galaxy"

"It also seems that Grand Master Shan thinks we could use a little more help," Jeldark broke in to the conversation, "and I'm guessing that's why Xin now has a padawan.  Though, even I question why she would send a child to aid us, knowing what we're facing."

As she was placing her lightsaber back on her belt, Ky'reyal shot back at the man in a temperamental voice, "I am not a child, a youngling or a little girl, I am a Jedi Padawan!"  Then after a moment's pause went on, "and my name is Ky'reyal Tano... is that so hard to remember?"

"Interjection," D9 suddenly stated, "I like her already Mistress, she also expresses distaste toward our resident Sith meatbag... can we keep her?"

"Button it, D9," Dara replied to the droid angrily, "she's a person, not a pet monkey lizard," then addressing the two adults standing there, "Xin, Jeldark, over here, time to talk," then addressing Ky'reyal, "you, stay right here and don't move."  Finally turning to D9 she said in exasperation, "and D9, I don't know... just stand there and look pretty for now."

As the trio moved toward the galley area, Dara began to whisper, "look, this isn't a passenger liner, where are we going to put her?"  Then leaning against the counter went on, "it's getting crowded on this ship.  It wasn't designed to berth a lot of people, me and Xin are already sharing my quarters.  I mean we do have one more bunk, but I don't think it's a good idea for a kid, especially a girl, to share a room with Jeldark... no offense, big guy."

"Perhaps we could purchase a folding bunk from the Promenade, it would be a little crowded in there, but she could stay with us," Xin softly replied, "she can't go back to Tython.  Besides, she was entrusted to my care and tutelage... I have no other choice, Dara... it's my duty."

Suddenly the pair's exchange was interrupted by the distinct sound of weeping as Ky'reyal approached the Captain and sobbed, "please Captain, let me stay... I promise I won't be a bother.  I'll sleep in a supply closet, keep the ship clean, anything you need... just don't send me away."

Seeing the young girl's anguish, Dara opened her arms and said soothingly, "come here, sweetheart."  As Ky'reyal got close, she embraced the youngling and cooed, "you're not going anywhere honey.  I can see how you thought I was going to get rid of you, but you're part of our strange little family now and we don't turn our backs on family.  You'll bunk with me and Xin, sure it'll be a little tight, but it'll be okay."

Watching the woman comfort the girl, Jeldark took the moment to speak up, "I have a better idea, Captain."  Noticing he had Dara's attention, he continued, "Padawan Tano and her master will need privacy for training and meditation, they can have my quarters."  Seeing the woman getting ready to comment, he help up his hand as a sign for her to allow him to say more, "as I said, they will need a place of their own.  I noticed while rearranging the hold you already have a few stowaway beds in there, I also noticed there was a latrine in the area.  A bit of further rearrangement and I can set up a small, but comfortable sleeping area.  There's only one drawback..."

"And what would that be?" ,Dara asked.

"There's no shower," then turning to Xin said, "we could come up with a time schedule where I would be able to use the one in your new quarters and save some embarrassment from running into each other at awkward moments."

Butting in, Dara said, "you continue to surprise me, you definitely defy the profile of the typical Sith, sir.  However, you'll use mine instead and we can set up a timeshare plan.  It's a given fact, no matter how good the plan is, something will go wrong.  The last thing we need is for our new crewmate to walk in while you're bathing or vice versa."  Then with a slight wink and smile, added, "it's not like you'd be the first naked man I ran into in my quarters."

Laughing at the woman's remark, "you're logic is flawless, Captain, we'll work diligently to insure that won't happen... though, I must admit I find the matter in reverse to be quite intriguing."

Looking to her droid, Dara said as she released her embrace of the girl, "D9, find out where Ky'reyal's belongings are being held and bring them here.  Then when you finish that, help Jeldark move his things and then move Xin and Ky'reyal's stuff to their new room."

Turning to do as ordered, D9 replied, "yes Mistress," then added in a sarcastic tone as he left to complete his given assignments, "lovely, I can now add baggage carrier and nanny to my list of protocols."

Pointing at D9 as he departed, Ky'reyal asked, "is he always so snarky?"  Receiving a unified 'yes' in response, the girl giggled, "I think I like him, too... can we keep him?"

Finding her words amusing, Jeldark said to the group, "well, I've got some more work to do," then bowing his head slightly went on, "until later this evening ladies."

"Master Jeldark, please don't go yet," Ky'reyal called after the man, then turning to Xin said, "Master Xin, you made it clear that I should get to know Master Jeldark better," then taking a breath, "with your permission, may I assist him?  After all, he's giving up his quarters for us, the least I can do is return his generosity in some small way."

"You're learning the Jedi way quickly, my padawan," Xin replied with a smile, then addressing Jeldark said, "I trust you with her, my friend, and I think it's a very wise idea if you wish to have my padawan's aid."

Thinking the offer over for a moment, "I would welcome the assistance, but only on one condition," then looking at Ky'reyal, added, "your master is Xin Quon, not me.  She is the only person on this ship you will address as such... I am Jeldark and only Jeldark, understood?"

"Well then, off we go," the man said to the youngling, "perhaps I should begin by telling you a little about myself," then turning back to Xin before exiting, "remind me to make a holo of this one day, I have a feeling this won't be last time I tell this story to someone and it sure would save time and breath in the future."  Turning again to leave, he began regaling Ky'reyal the story of his life, "I was born on Korriban three hundred and eighty-six years ago ..."

"Hold on", Ky'reyal butted in, "you're pulling my leg!  I mean it's true us Togruta enjoy a good story, but there's no way you're almost four hundred years old."

Smiling at the girl Jeldark responded, "ah, but it is my dear and if you'll let me continue, I'll tell you how it came to be."

"Do you think they'll be alright?" ,Xin softly asked her friend as she watched the two leave.

"Look at him sweetheart," Dara answered, "when was the last time, if ever, you've seen him so happy?  The kid will do him good, he's getting to act in a sense, like a father again."  Then jokingly added, "it looks like the parent's curse also applies to Jedi masters and their padawans, this is going to be anything but a boring ride.  Now, we have an extra mouth to feed, time to go shopping.  If she's even close to a typical teen, like we were, she'll probably eat more than the three of us grownups combined."

Unable to stifle a laugh, Dara said, "when you have kids of your own some day, I hope they're just like you!"

Rolling her eyes in response, Xin then sarcastically replied, "very funny.  Well, come on, we have shopping to do... Auntie Dara... ... ..."

It's a wonderful moment when I pass over your publications. It is absolutely necessary to open the image wide to fully enjoy the 6 scenes all equally well done. The text is always exciting, in fact it is a titanic work, bravo !!

First off, i agree with ' Kordouane. ' View Full Screen to get the most out of the great render job that is a integral part of this grand story. By reading your tale, I improve my own writing through the process of seeing an excellent writer handle so many passages with such literary grace.

Definitely agree with Kordouane and Daggerwildo, all your images should be seen full size to really get the feel for the story line. The subtle details found in the background often add even more to the narrative.

It seems you literally put your 'heart and soul' into your writing and that is what makes your stories so wonderful.

Keep it coming, the story just keeps getting better and better!

Great chapter and images to a fantastic tale.