A Haven For The Weary, Pt. 2 by MioraaNyte 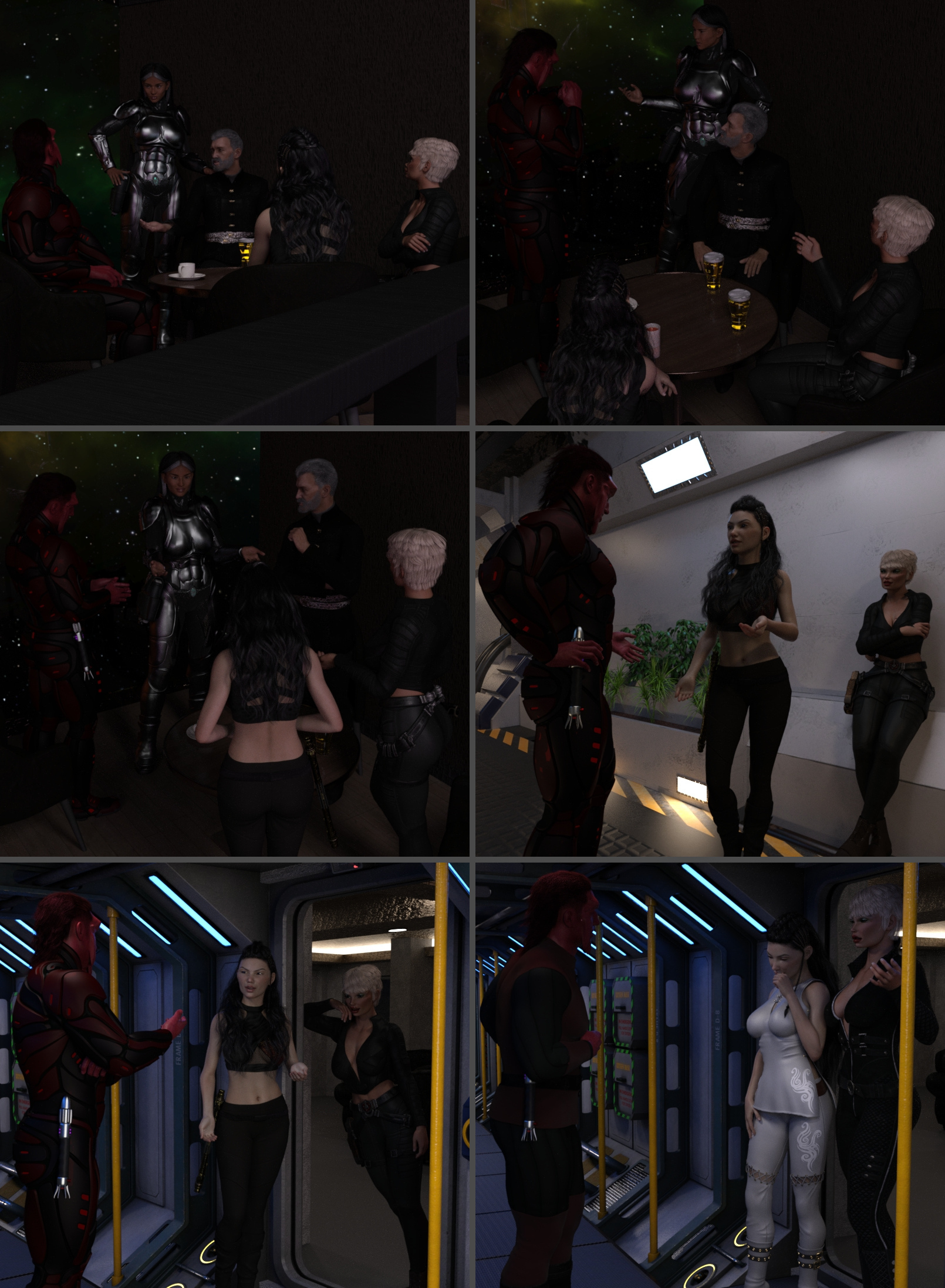 "Ah, glad you could join us Ana," Nico said to the woman as she approached  the group, then turning to the people present, introduced them, "this is Xin Quon and Jeldark, friends of Dara's."  Pausing momentarily, he continued, "and this is Ana Vo, head of station security forces and my wife."

"Papa," Dara asked her adoptive father in mild shock, "you and Ana finally got married?"  Looking up at the Mandalorian, she went on, "I don't know whether to congratulate or console you, Ana," she said with a smirk, "how in the universe was he able to con you into that?"

"It's quite a story, Dara," Ana responded, "perhaps if you hang around for awhile, I'll tell you later."

"You speak Mando'a," Ana remarked to the Sith, "how did you know I was clan leader?"

"The sigil you wear on your waist," Jeldark replied, "it belonged to your father.  I had the honor of fighting along side of him at the Battle of Zyliv'Gor, among other places."

Staring at the man in disbelief, Ana stated, "that's impossible Sith, Zyliv'Gor took place over forty-five years ago.  My father found me at that battle when I was a baby," then looking him over, added, "at best, you'd have been in diapers at the time."

Interjecting into the exchange, Dara said to the woman, "trust me Ana, he's a bit older than he looks."

"I was there Matriarch," Jeldark assured the Mandalorian, "your father fought and killed the Rattitaki warrior that was about to kill you.  When the fight was over, he picked you up in his arms and said to me, 'the Maker has blessed me with a daughter, Jeldark'."  Stopping for a moment, he continued, "he told me your name would be Ana Galina, in honor of his grandmother who was killed protecting the foundlings many years earlier on Gatsen Prime."  Again pausing, went on, "at that moment, he went to his knee with you cradled in his arms and swore the Oath of Fatherhood,  Ni kar'tayl gai sa'ad  (I know your name as my child)"

"You're an intriguing man, Sith," Ana said, "I would like to hear more, about how one who appears so young, could be at a battle that occurred seemingly years before he was born."  Turning to the rest of the people there, she stated, "I invite you all to our home this evening at 1830 for a traditional Mandalorian welcome feast to celebrate your arrival to our 'little community'."

Smiling, Dara replied to the woman, "tiingilar and ne'tra gal?  I can't remember the last time I had those... it's good to be home!"

"Excellent," the Mandalorin returned, then told the Captain, "your quarters are where they've always been Dara and I made arrangements for Jeldark to stay in the room across the corridor.  I'll see you all this evening, dress is casual."

As Ana turned and left, the group broke up and headed their separate ways.  Stopping in the corridor along the way, Jeldark asked Xin, "have you ever had tiingilar, Xin?"  Receiving a negative response, he then spoke to the Captain, "I think it best we stop by a pharmacy and pick up some calcarbs for her to take beforehand, don't you agree?"

"Not a bad idea," Dara responded with a chuckle, "a tiingilar virgin could use all the help they can get."

Looking at both of them, Xin asked with a confused look on her face, "why would I need antacids before a meal, am I missing something?"

Answering the woman's query, the Sith replied, "tiingilar is an extremely spicy stew that is served when Mandalorians want to test the mettle of potential friends and allies.  It's often said that a man or woman that can survive a bowl is worthy of these qualities, even marriage."  Then added, "and ne'tra gal, or Black Ale as most non-Mandalorians call it, tastes deceptively sweet and spiced, it's quite a potent alcoholic beverage that has the effect of 'catching up with you later'... best you be prepared."

Arriving at their assigned quarters, Jeldark once again spoke to Xin, "be sure to bring your lightsaber when we go there."

Again, with a confused look, the former Jedi asked, "why?  Weren't we invited to a friendly gathering, why would we go armed?"

"Mandalorians are always armed," the man responded, "however, when we arrive, before you and I cross the threshold, we will present our weapons to the Matriarch as a symbol of trust that we will be safe under her protection while in her home.  Being Mando'ad, a Daughter of Mandalore by her father's marriage to the Matriarch, the Captain will step in first and accept them on her behalf.  Ibic cuyir te ara... this is the way."

"Don't worry, Jeldark," Dara interrupted, "I'll give her a quick rundown about Mando protocols, as much as I can, while we're preparing," motioning down the corridor, she instructed the man, "that's your quarters over there, see you in a couple of hours."  then addressing her friend, "come on Xin, we've got some preparing to do before tonight."

A couple of hours later, Jeldark stood outside the women's room and waited for them to answer the chimes.  When the door opened, the pair stepped out to meet him.  Dressed in an outfit of silver shimmersilk, Jeldark was awestruck at the sight of Xin and stammered, "Xin, you look amazing, like an angel."

As the the two stood there silent, staring at each other, the Captain loudly cleared her throat, "ahem... if you two are finished, I believe we're expected somewhere... ... ..."

your atmospheres and stories are so the best. well done.

Love how you used Mando'a in your story, makes it even more enjoyable to read.

Love the story and admire getting 6 pictures ready to go at once!

Your detail is amazing. Right down to teaching us the language. I half wanted to go to SIRI and ask how the words were pronounced. Fabulous work and some grand panels.

There's a website called the Mando'a - English Translator (lingojam.com/Mandoa-EnglishTranslator) that's not too bad for the written language.

I have a hard enough time nowadays, it seems, pronouncing English words much less the nuances of Mando'a. 😆

Thanks again Dag for coming by and your wonderful comment.

Thanks for entertaining us with your wonderful talents.

Good series of images and text !!