Chasing A Dream, Pt.6 by MioraaNyte 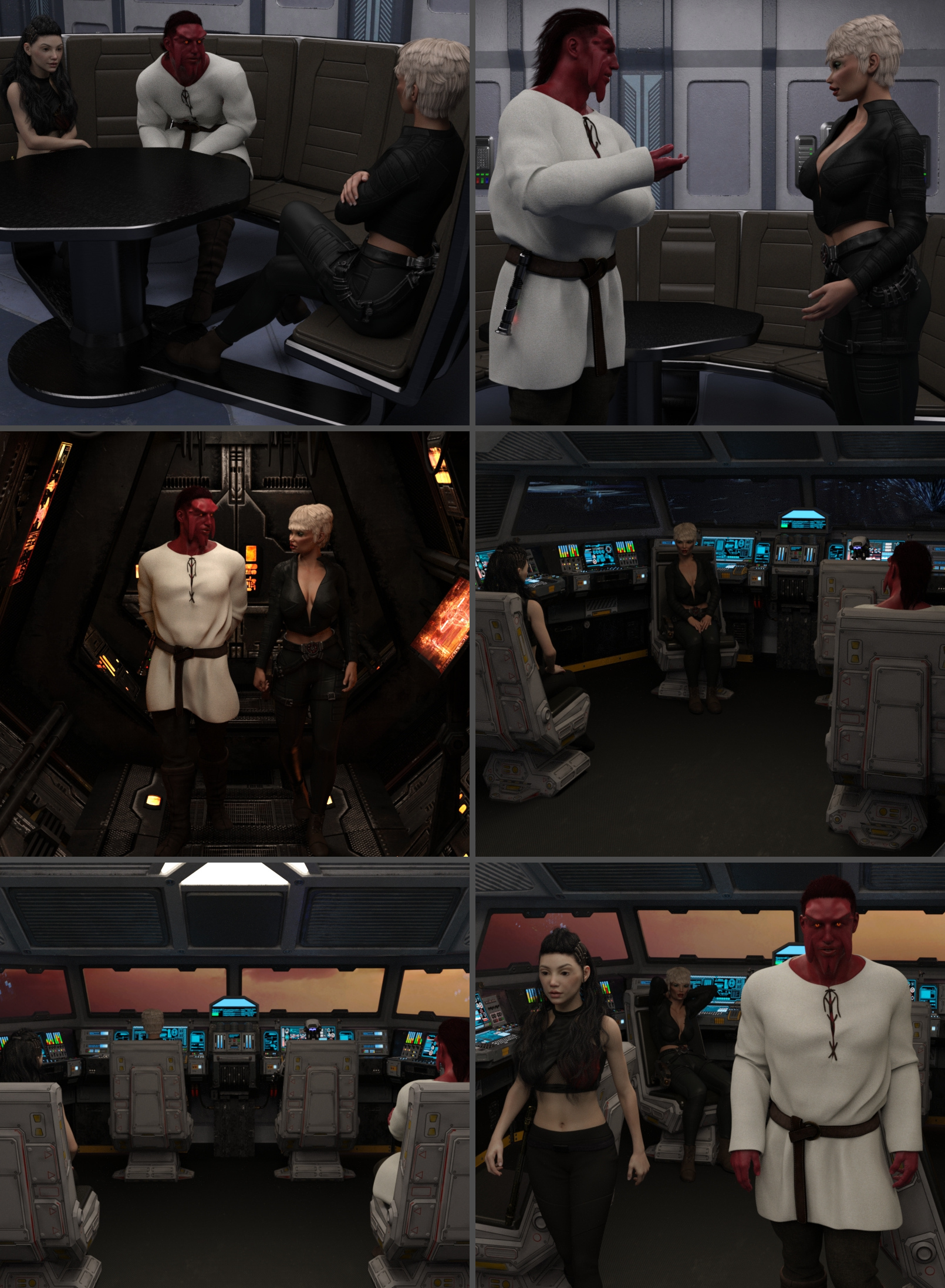 "So, did everybody get a good night's rest?", Dara asked the pair sitting with her, "you're going to need it."  After receiving a reply from the pair, Dara continued, "we'll be coming out of hyperspace soon at Balmorra."

"Please pardon me for asking, Captain," Jeldark broke in, "but last I heard, the Imperial fleet had the planet very effectively blockaded, how are we to get past that?"

"Good question, I was just about to get to that little detail," Dara responded, then giving both a quirky smile, "we'll be coming out in Balmorra's atmosphere about seventy-five kilometers above the surface."

After a few moments where Xin and Jeldark stared at one another in total disbelief, the Sith once again inquired, "we did hear you correctly, Captain... you did say we'll be exiting hyperspace within the planet's atmosphere and very,very close to its surface?"

"You heard right," the woman replied with a somewhat evil sounding laugh, "do it all the time."  Seeing the concerned looks on the two people's faces, Dara couldn't resist adding a little seasoning to the pot and nonchalantly quipped, "of course if D9's calculations are off by even a few thousandths of a point... well, we wouldn't know it any way."  As the pair once again stared now at the Captain in total disbelief, Dara decided to let them off the hook.  "Seriously, don't worry you two.  As I said, me and D9 do this kind of thing all the time, his astromech abilities are the best... even better than Nico's old T7, and that little droid could drop the Redshifter on the point of needle."

Waiting for signs of some relief to return to the duo, Dara went on with her briefing, "now this won't be a fun experience, the first few seconds we're basically a meteor and it's going to be a rough ride... sorry, but internal dampeners can only do so much.  However, looking like a meteor is the perfect cover for our entrance, the fleet's sensors won't be pointing our way and by the time we come out of the burn, we'll be below ground sensor sweeps."  Giving a moment for her words to sink in, Dara added, "I'll take a few bumps, bruises, aches and pains over being atomized by air defense artillery, any day."  Then pausing momentarily again, commented once more, "any questions so far?"

Without receiving any queries into the plan thus far, the Captain continued, "alright, now that we've covered that, moving along.  We'll all be up in the cockpit for the trip in, strapped in tight."  Going on with her speech, "when everything settles down and before we land, you two will go to my quarters and lock yourselves in.  Do not open that door until I tell you it's clear."  Wanting to further inform the pair of the necessity to remain hidden, Dara  added, "Xin, your presence might raise questions and well, Jeldark... yours would most certainly raise blasters.  I'd rather not have to deal with either."

As the group got up to leave for the cockpit, Dara said to Xin, "you go ahead, sweetheart, I would like to talk with Jeldark privately for a moment"  Turning toward the other two, Jeldark nodded approvingly and motioned her to proceed.  Waiting for the doors to close behind her, Dara turned to the Sith and stated, "you are aware the cargo I have is for the Republic backed resistance fighters, do you have a problem with that?  Should I have any concerns with you?"

With a stoic expression upon his face, the man answered her question, "there was a time when I would have stopped it, Captain.  However, the crisis we now face is much larger and vital than the petty squabbles between our respective factions."  Pausing for a moment, Jeldark continued, "you will not receive any interference from me."  Upon leaving the room and walking down the corridor to the cockpit, Jeldark further addressed the woman, "while I do appreciate the hospitality and trust you've extended to me so far, I am fully aware it is solely based on your trust for Xin."  Pausing for a breath, he went on, "I am not nor do I wish to be your enemy, Captain.  I will endeavor to earn your trust based on my own merits."

"Truthfully, Jeldark," the woman replied, "you've got yourself a difficult task ahead of you."

"Nothing worth having is ever an easy task, Captain," the Sith responded, "but the truth has always been a good start."

Arriving at the cockpit, everybody took their seat as Dara informed them, "we'll be coming out in about thirty seconds, buckle up tight."  Turning to face the controls, she threw her passengers a jovial quip over her shoulder, "and by the way, if you guys got some kind of Force trick that can smooth out the ride, please feel free."  Then turning to her droid, said, "alright D9, the ship's yours."

Having the intial shock of re-entry behind them and their flight path now stabilized, Dara unfastened her restraints, turned about and told her passengers, "we'll be landing shortly, head to my quarters and lock yourselves in.  I'll come get you when we're done."  Taking a moment to relax and slump in her chair, the woman also added, "and thanks for the smooth ride, it's sure nice to have a Jedi aboard."

Calling back to her friend, Xin responded, "sorry, that wasn't my doing Dara, I don't have that skill."

Then if it wasn't you," pausing for a brief moment, Dara was about to speak again before she was cut off by the Sith.

"I've heard Balmorra can be a very dangerous place, Captain" Jeldark said to the woman with a subtle smile as he exited the cockpit to follow Dara's instructions, "do be careful please... ... ..."

Wow, this must be a lot of work. I've got to read it. It looks interesting. Well done.

Thank you, it's actually a labor of love... but yes, it can sometimes take awhile.

As my own worst critic, I been know to re-do a single image pane innumerable times until I say it's good enough to share.

Wonderful chapter and images. The effort you put into your work shows your dedication and passion for not only CG art, but entertaining your readers as well.

I'm impressed with your images and stories

I really admire the heart and soul that you put into your wonderful work. The story is so well-crafted and it’s so intricate in its detail. You then offer us wonderfully crafted visual art to support the story. I admire the time it must take to put all of this together. Your work is a joy to view.

In your story line I enjoy how you portray the Sith characters as more or less normal people, no Mary Sues or godlike in their daily lives. Great work!