Chasing A Dream, Pt.1 by MioraaNyte 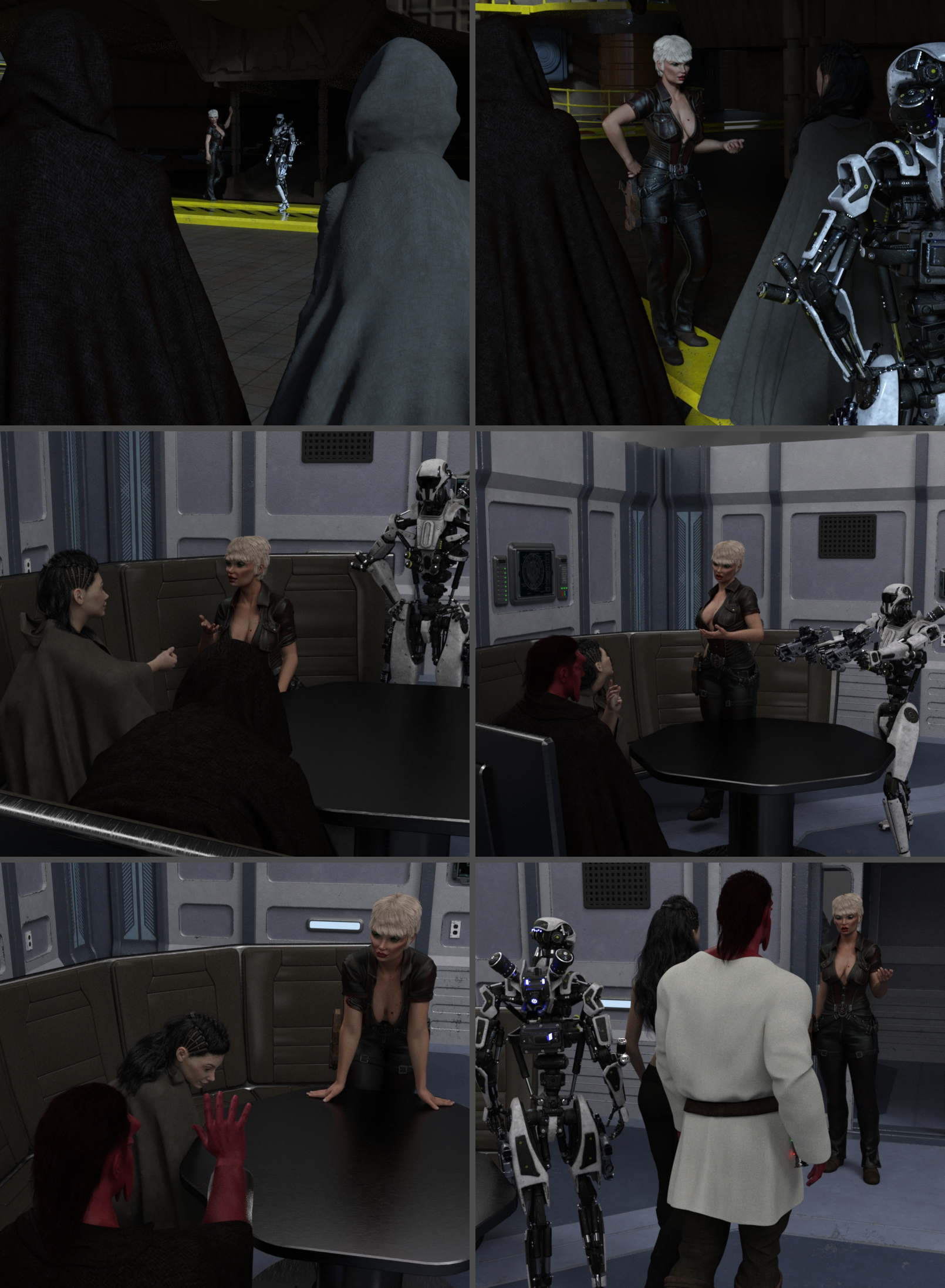 "Mistress, my sensors indicate the approach of two meatbags,"... the droid said to its owner, "sensors also indicate they both carry lightsabers."

"I see them D9," the woman replied, then with a sigh added, "great, just what we need right now, Jedi."

As the pair approached the ship, one of the Jedi removed the hood of her cloak to speak to the Captain, "hello Dara, I need your help."

"Well, if it isn't my old friend Xin Quon," the Captain responded, "you sound desperate, what did you get yourself into this time?"  Then motioning to the boarding ramp, "get inside before you're seen, you can tell me there."  Entering the old freighter the group sat at the lounge with Dara opening the conversation, "alright spill it, why do you need my help?"

"My friend and I need to get off Coruscant as soon as possible, we're in trouble," Xin said to the woman.

"Go on," Dara replied, "I've got a lucrative contract from the Republic to smuggle arms to the resistance fighters on Balmorra.  Throw me a bone, why should I jeopardize that for you and this stranger?"

"Seems there was a jailbreak and I may have been involved," the Jedi told her, then turning to her companion, "Jeldark, introduce yourself to the Captain."

Lowering the hood of his cloak, the man spoke, "hello Captain, pleased to meet you."

In an instant, D9 drew his blasters, pointing them at the man and stated, "a Sith, request permission to vaporize the meatbag, Mistress!"

Sensing the man's intentions to arm himself with his lightsaber to respond to the threat, Xin motioned to him and whispered, "no."

"Stand down, D9," Dara commanded the droid in a firm tone, "let's hear what they have to say, then maybe."  Turning her attention back to her friend, the woman continued, "you better have a real good explanation for this, Xin.  Now I definitely want to know why I might be willing to stick my neck out for two wanted people... especially for a Sith."

"He was made a deal by both the Jedi and the Republic," Xin explained, "by helping me capture the Sith Emperor and bring him back for trial, he would be granted amnesty and allowed to live free as a Republic citizen."  Pausing for a moment she went on, "things didn't go as hoped and we were forced to kill him.  The powers that be, decided Jeldark did not carry out his part to their satisfaction and when we returned to Coruscant, he was arrested and put in prison."  Then with pleading eyes, looked into Dara's eyes and added, "he did the best he could, but they didn't care.  So I resigned from the Order and rescued an innocent man from a grave injustice."

Suddenly interjecting himself into the conversation, Jeldark spoke, "though we may have killed the body, the Emperor's essence lives on... Xin and I are going to finish the job, or die trying." Then with a determined voice added, "I will always be Sith and an Imperial, but ridding the galaxy of this threat is vital to the survival of all sentient beings."

Standing there absorbing all she had just heard, Dara turned to Xin and said, "you've saved my ass more times than I can count Xin and I owe you more than I could ever hope to repay... you have my help."  As the now former Jedi thanked her friend for her assistance, Dara stood up and headed for the door, "don't thank me yet, Xin.  When this is over, I want to know everything, now follow me."

Rising to do as the Captain ordered, Dara wheeled around and spoke to the pair, " as I told you earlier, I'm working for the Balmorrans with the full blessings of the Republic, not screwing that up.  Once again heading out the door, Dara added, "I can definitely get you off world, but I guarantee you're not going to like it ... ... ..."

A bit of a departure from your previous story lines, the plot thickens.

The way I see it you always have great talent in your work and storylines. Nice college of scenes. 5+

Fantastic job writing and illustration, eager to see where this goes.

Fabulous set of image, parts 1 to 3...so many quality elements within...lovely work...!

Wonderful story telling and a joy to view. Well done.

so much goes into your images I'm really hooked into story and I love your panel work.

Fantastic job writing and illustration,, will stroll through your fantastic directory from time to time and look at individual graphics!!!!!!!!!!!!!!!!!!!