Packing It Up, Epilogue by MioraaNyte 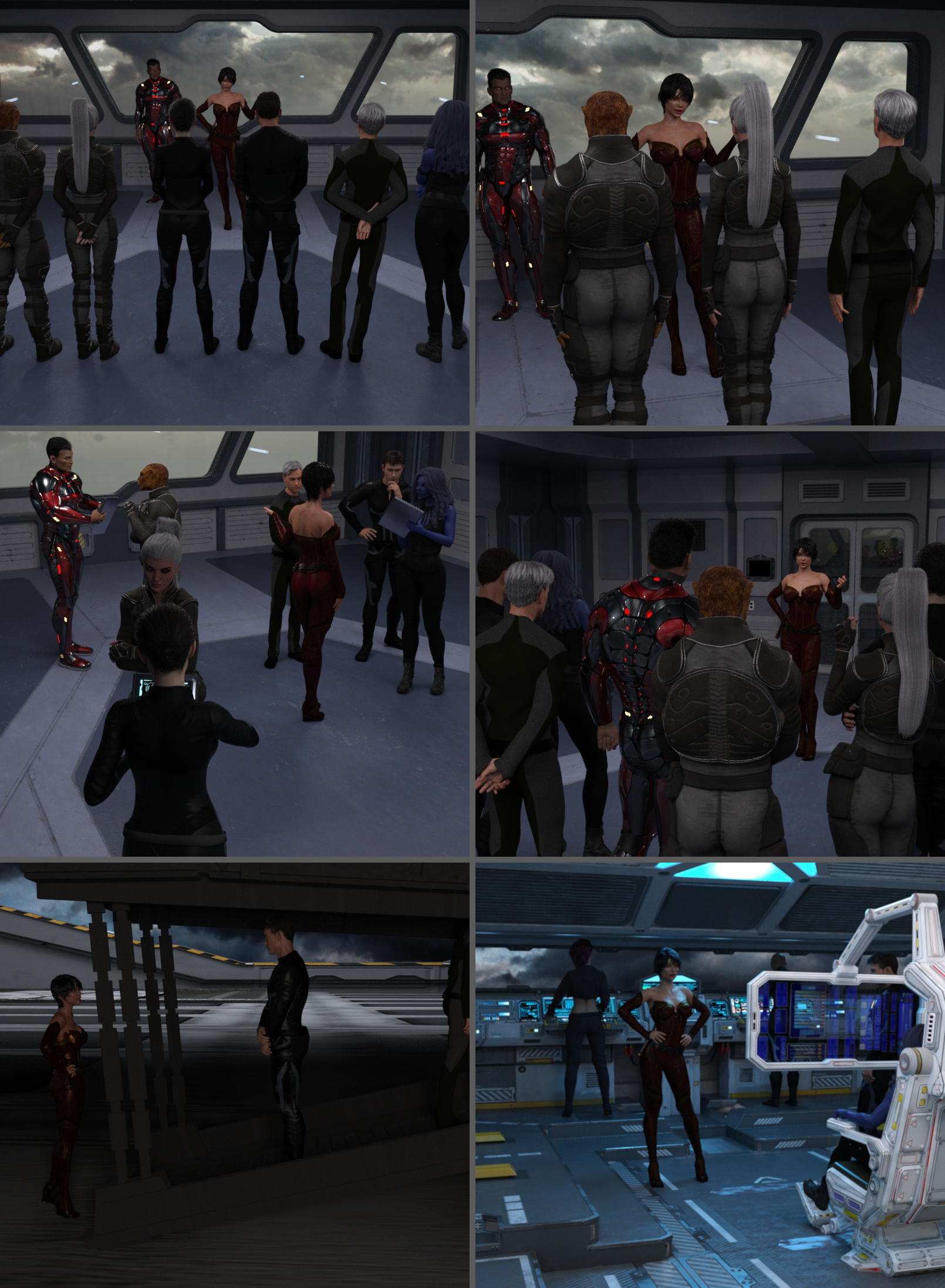 "The day is finally here," Zefaara said to the people in the room that stood before her.  Looking around the now bare conference room, she remarked with a slight laugh, "I've got to hand it to Gruud and his people, when you tell them to strip a place, they don't fool around.  I'm surprised there's still paint on the walls."

Leaning over to his master, Trego informed the woman, "My Lord, Sergeant Major Xalo has reported that she and the last of the security detail have departed the surface,  They will be aboard their transport in a few minutes."

"Excellent Trego," the Sith responded, "thank you for the update."  Turning once again to the people standing before her, Zefaara began to speak, "as you all know, we have had a powerful ally assisting us the last few years, but what no one else other than myself knew is who it was."  Pausing momentarily, she continued, "it is Darth Marr who believes in our cause and our mission to bring all of the Empire's people together as one.  It has been his and our people working together for the past two years to prepare our new home for us," then added, "and there seem to be others on the Dark Council that share this goal and may join us in the future."

"Now before we go, there is some business that must be attended,"  smiling, she went on, "will the following personnel step forward, Major Jolan Amstel, Senior Lieutenant Carla Dovala and Lieutenant Talos Drellik."  As the three people came forward and stood before the Sith, she continued, "when we arrive at our new home, the military forces of myself and Darth Marr will become a combined unit."  Turning to the Cathar, she said, "Major, as is customary, the commanding officer of the planetary ground and air forces must possess the proper rank.  You have served me with dedication and honor since the moment you became one of us.  It is with pleasure that I now promote you to the rank of General."

Turning to the woman, Zefaara addressed her, "Senior Lieutenant Carla Dovala, as you will now be the commanding officer for our combined fleet and naval forces and too, because of your tireless and faithful service, I hereby appoint you to the rank of Admiral."  Speaking to both of her newly appointed commanding officers, she went on, "when we arrive at our new home, you will both meet your new executive officers from Marr's forces presently stationed there.  They were hand chosen by him and will serve you faithfully.  Congratulations both of you."

"And last, but not least," she said smiling as she looked toward Drellik, "Lieutenant Talos Drellik.  You first served me when I was an apprentice searching for an artifact on Hoth.  Over the years, you have worked for me when I needed your expertise.  You have always answered my call without hesitation, this is long overdue, my friend."  Walking over to the man and placing her hand upon his shoulder, she proclaimed, "Lieutenant Talos Drellik, it is my pleasure to bestow upon you the rank of Senior Captain and appoint you as commanding officer of Recovery Unit One, Imperial Reclamation Service Special Operations Group Alpha.  Congratulations, Talos."

Motioning the trio back into the rank before her, the Sith turned to her apprentice, "Lord Trego has brought datapads that will outline our exodus, we will split into three separate flotillas, one under the command of of Lord Trego and General Amstel, the second led by Omega and Admiral Dovala, the third by myself and the Commander."  As Trego passed out the datapads, the teams broke up to study the plans.  Zefaara then added, "as you will notice, all flotillas will be taking separate routes over the next ten days when we will finally rendezvous at the last point to travel as one on to our new home.  You will also notice there are layovers at certain points along the route.  During these times, you are to send out fighter patrols to reconnoiter the areas for any followers."  Then with a deadpan tone added, "the areas of these layovers are empty space, if the patrols encounter any vessels or probes other than ours in these areas, they are weapons free and will destroy them... no hesitation.  We cannot risk the slightest chance that our final destination will be discovered and reported to anybody, is that understood?"  As the people in the room acknowledged her command, the groups went back to studying the plans.

"Who in the hell came up with these plans, looks like the ideas of a spice addled gypsy freighter pilot?", Malorva remarked as she looked over the routes, "we're backtracking ourselves half the time and the other half is taking us all around the galaxy."

With a jovial tone, Zefaara responded, "I recalled the tactics of a certain bounty hunter after I sprung her from a Coruscant prison to throw off any tails."

"I thought it looked familiar," the Chiss replied with a laugh.

As Trego informed his master that the last of their people were aboard their ships, Zefaara began to walk toward the room's exit, then stated, "alright people, get to your ships, we leave within the hour."  As the groups parted and went their separate ways, she added, "see you all again in ten days and may the Force serve us well."

Arriving at the Commander's ship, Zefaara hesitated a moment and took a final look around before boarding.  Noticing the Sith's actions, the Commander asked the woman, "is there a problem, My Lord?"

Answering the man's query, she replied, "Commander, when I began bringing my people here years ago, I made them a promise," pausing briefly, she went on, "I promised them I would not step final foot off Drommund Kass until they were all safely gone themselves, I'm taking a moment to fulfill that oath."  After a few seconds, she added, "it is done here, let's go."

"All ships report everybody is safely aboard and ready for departure, My Lord," Mako informed the Sith as they prepared for takeoff, "all lights green, we're good to go on your command."

Turning to Malorva who was sitting in the pilot's chair, Zefaara said to the woman, "Pilot, get us the hell out of here..."

Fabulous characters, quality set of images....needs to be viewed full size to appreciate all the details...!!..Happy New Year...wishing you and yours all the best for....2021

a great wrap up on this series. Happy New year.

This is a wonderfully done piece of your Artworks & writing! Many thank's for spending also your precious time for looking and leaving a comment on my images! I wish you and yours a Happy and healthy New Year 2021, take care and stay safe..! 😊

Excellent story and supporting graphics. I look forward to many more creative works from you in 2021. You are a joy to follow and i wish you all the best in your your personal and artistic growth in the coming year. well done.

Fantastic work. A very happy new year to you and all your loved ones!

What astory ! and what a set of images ! it's like your imagination was boundless...