So it Begins, Pt. 4 by MioraaNyte 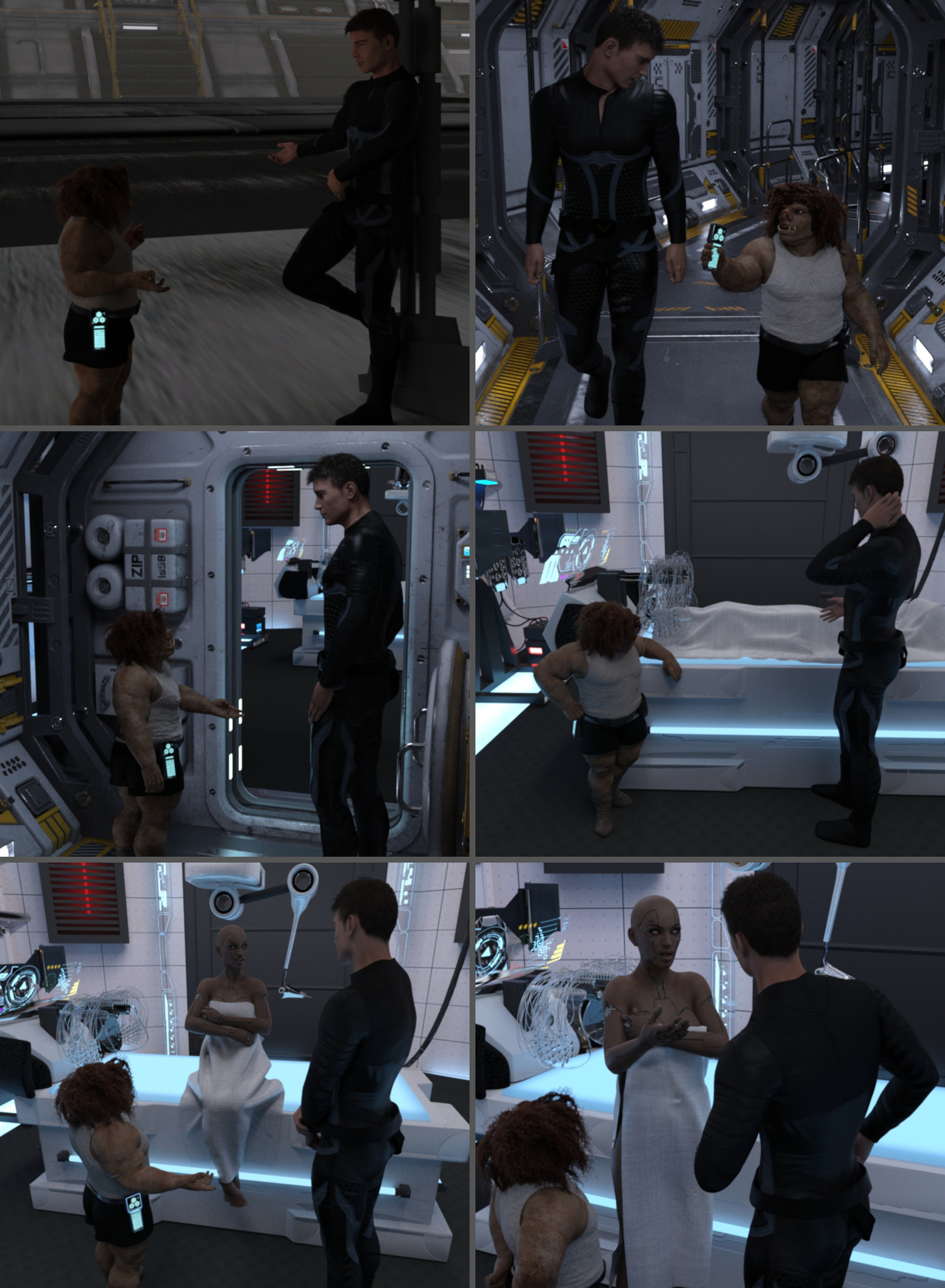 As the two watched Darth Nox leave the hangar, Gruud turned to the Commander and said, "before you go Commander, there's one more thing I like you to see.  You might call it a gift from us in the Engineering Department."

Turning to the Ugnaught, the Commander replied, "two gifts in one day and it's not even my birthday."  Motioning to Gruud, he then added, "lead on Mr, Gruud, let's go have a peek at this present."

While walking down the corridor, the Commander remarked to his companion, "I'm very impressed by your ability to speak basic, I did not think your people could do that."

Reaching to his belt, Gruud removed a device and handed it to the Commander, then said, "it would be very impressive if I actually could speak basic, sir.  I do understand the language, but as you're well aware, my vocal physiology makes it impossible to do so.  This device is what makes it sound as if it's actually me speaking."

"Really," the man responded, "what is this thing?"

Answering the man's question, Gruud began to explain, "simply put, it's a translator that also acts as a ventriloquist.  It picks up my actual voice and with the use of dampening fields, directs the sounds to it."  Pausing a moment, he continued, "it then translates this into whatever language I program, redirecting the output to the area of my mouth so that the words seem like they're coming from my lips."

"That's amazing Mr. Gruud," the Commander replied, "I've never seen anything like this."

"In truth, this wasn't my idea," Gruud answered, "the first prototype was built by my senior engineer... of all people, a Jawa.  We then began collaborating to come up with this working model.  Hopefully we'll be able to make it as small as a locket or brooch and have it automatically recognize the input and proper output patterns."  Then with a smile, he added, "after that, we can issue them to everyone and communication issues will be a thing of the past."

Arriving at the door of the robotics lab, Gruud gestured to the Commander, "step in sir, time to meet the first member of your ship's crew."

Standing beside the work table, the Commander peered at the object covered by a linen sheet, the man queried "is it some kind of droid?"

Leaning against the table, Gruud turned toward the draped figure and said, "Lexi, time to wake up and introduce yourself to the Commander."

As the figure rose to assume a seated position, the Commander could not help but notice the object had the appearance of a beautiful human female.  Turning her attention toward the Commander, it spoke, "good afternoon Commander.  I am model L3-X1, referred to as 'Lexi', an autonomous synthetic humanoid life form.  My functions include protocol, astromechanics, personal protection, ship's steward and other services unique to a starship and its personnel."

Shocked by Lexi's near human appearance, the Commander replied with a slight stammer, "hello... Lexi? What are you again, exactly?"  Continuing his inquiry, he went on, "you make yourself sound like another mechanical being I knew."

"Searching data banks," Lexi answered, then said to the man, "yes, you are referring to the mechanical life form once known as Scorpio before she was destroyed."  Pausing briefly to go from her seat to stand before the Commander, Lexi continued her dialog, "I was constructed in essence using her physical designs and heuristic AI, however her thought processes were seriously flawed.  She sought to subjugate the biological species of the universe to serve her desires."  As Lexi went on, "it is more beneficial to myself and the universe that I assist biologicals rather than attempt to enslave or destroy them."

"I see," the Commander replied, "right now, time is limited, however I would like to speak with you again in the future about your roles.  For now though, please see the quartermaster for clothing issue and report to the ship."

"Is there anything specific you would have me do aboard ship?",  Lexi inquired.

Thinking for a moment, the man responded, "for now, I leave that up to you.  If you see something that needs to be done, take care of it."

As Lexi left the lab to carry out her instructions, the Commander could not help but again notice Lexi's physique that was barely covered by the sheet wrapped around her.  Looking over to Gruud, he commented, " I'm not sure if I'm impressed or concerned about your engineers and designers."

With a jovial tone, Gruud replied, "what can I say, Commander, my people do love their jobs."  Then leaning against the table, added, "by the way, happy birthday Commander... ... ..."

Fantastic detailed work once again. I think if I ever attempted anything this involved, my head might explode. I don't know how much time you spend planning it out, but it's executed so beautifully every time. :)

I kinda/sorta make a mental story board, then it's all "fingers crossed, hope this works out" after that.

Wonderful way to introduce a new character to the story line.

hats off to you, not something i could do.

A grand story telling adventure and I love your panels. Some very amazing characters.

I enjoyed viewing your fine work.

How does she stack up next to Guri?

Had to look up Guri, wasn't familiar with the character.

There's no way to really compare the two, since the timeline of my stories are set in the Old Republic Era approximately 3000 years before the movies time period.