White Wyrms Chapter 37: Show Me Him by RedPhantom 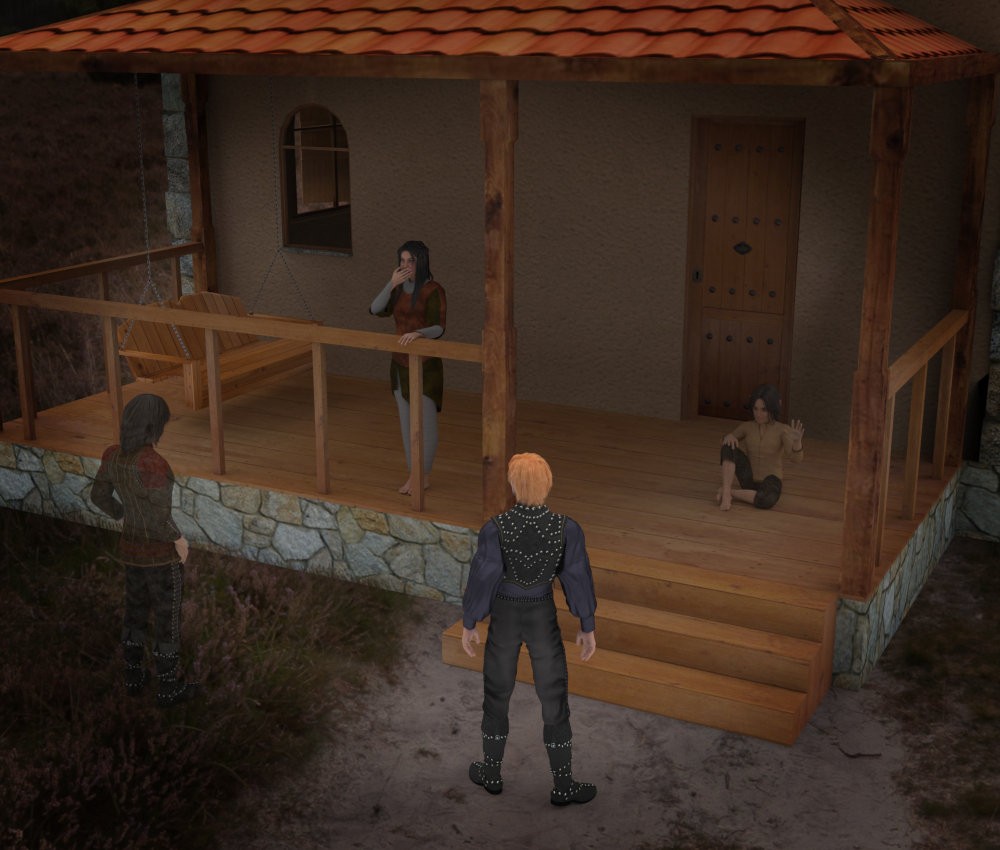 Thailyn appeared in a valley similar to what was outside the city. It took time to search but eventually, he found a small, simple house. Pisha sat on the porch knitting and watching a little boy play. Thailyn guessed it was what Ruzi had looked like when he was little before she cut his ears. She saw Thailyn approach and the boy disappeared. She stood. “Hello, sorry to intrude. My name is Thailyn va Shawtila Mishtali,” Thailyn introduced himself. He stopped several feet from the porch, close enough to be heard but far enough she wouldn’t feel threatened, he hoped. She controlled this world. She could create trolls to send after him or disappear. She frowned. “Thailyn is dead.” “Not dead, just hiding. I had some trouble with the council for a while. My dad was found recently and he and Ann were able to help me out.” “Mishtali’s not dead?” “No. He was a captive of Nor’than.” Thailyn grinned. “Nor’than’s daughter, Lyra, trained the mage who killed them both.” “Why are you here? No one comes here.” “Few can. You’ve hidden yourself well. I came to talk with you about the boy. I’m assuming that was Ruzi.” “How do you know Ruzi?” “I met him five years ago. I’m a healer at the palace in Sen-gan. Pt’this brought him in for healing. He’d gotten quite sick. Shunati made sure he was okay.” “Shunati saw him?” She started to get agitated. “He’ll kill him.” Thailyn went up on the porch and took hold of her shoulders, worried she might disappear. “It’s okay. He’s fine.” “No. Shunati will kill him. Ruzi’s half human. Shunati’s a traditionalist.” “Shunati’s not an assassin. He can’t kill anybody.” “He’ll report him. That’s just as bad. They’ll send an assassin. No one survives them.” “Pisha, he’s fine. Shunati won’t hurt him. He has dual citizenship.” She frowned. “It’s okay. As I said, that was five years ago. If anyone was going to kill him, it would’ve happened already,” he assured her. “There are plenty watching out for him, even your cousin, Jerta. Who better to protect him from the assassins than one of their own?” Pisha calmed some. “Was that him when he was little?” Thailyn asked. She nodded. “Can I see him?” He requested. She showed him the boy. The child looked up and waved. “Hi, mom.” Thailyn could tell this was a memory rather than something she was creating. “Can I see him now?” She asked. Thailyn showed her, making sure his eyes showed normal, not red. She frowned. “I thought you said it was five years. How old is he?” “Fifteen. This is how he looked when I met him.” He swapped out the fifteen-year-old Ruzi with a ten-year-old one. “Fifteen? It’s been ten years? My little boy is almost grown. Does he even remember me?” Tears came to her eyes. “He showed me what you look like. It was close.” “Show me him again.” He showed her Ruzi just before he’d left for Erilu. The boy’s mouth moved but Thailyn didn’t add sound. “What’s he saying? Let me hear his voice,” she insisted. He replayed the scene. “Cover your eyes,” Thailyn’s voice said. “I’m fine. I’m not using my mage sight.” “Cover them. I’m not taking chances.” “Dad…” A hand covered his eyes. “Go now,” Lamdi’s voice said. “Did he just call you dad?” Pisha frowned. Thailyn nodded reluctantly. He’d meant to leave that out. “I adopted him five years ago.” “Why?” “All my life I’ve met kids like Ruzi, alone on the streets, or in orphanages. Kids that needed a family. It broke my heart not to do more than heal them. Dragons instinctively protect the young, not just their own kids, but the whole clan. I’ve lived in Menthanla long enough, the kingdom’s become my clan. “I cared a great deal for the boy. I also did it in part to protect him. I’m Menthanlan. As my son, he is too. Laws have changed. The elves can’t mark him for death now. And it allowed me to come to talk to you.” Thailyn could feel his heart acting up. He was starting to have a bout. He ignored it for now. “I don’t understand.” “Do you understand where you are, what happened to you?” Pisha nodded. “My family beat me. I retreated inside myself to escape. Now, I can’t find my way out.” “Your father was arrested for what was done to you. Your brothers won’t let anyone heal you. Ruzi petitioned the elders to allow me to come to talk with you since he’s family too.” “You brought him to Erilu?” “No. He wrote a letter. Princess Ann pleaded his case.” “Why is she helping him?” “She’s my daughter so Ruzi is her brother.” “Isn’t she King Emeton’s daughter? Or did you adopt her too?” “No, I’m her birth father. Emeton was the one to adopt her.” The pain was getting worse. He couldn’t stay. “You said you came to talk to me, not heal me. What did you come to talk to me about?” “Pisha, I’m sorry but I have to go. I have an atrophied heart. Being in contact with you is causing me to have a bout. I’d rather not be at the mercy of your brother. He’s not happy I’m here. I have the elders’ permission to come back. Don’t worry. No one is dying.” With that, he left.

Good installment... Even in a dream world, things aren't always that easy.