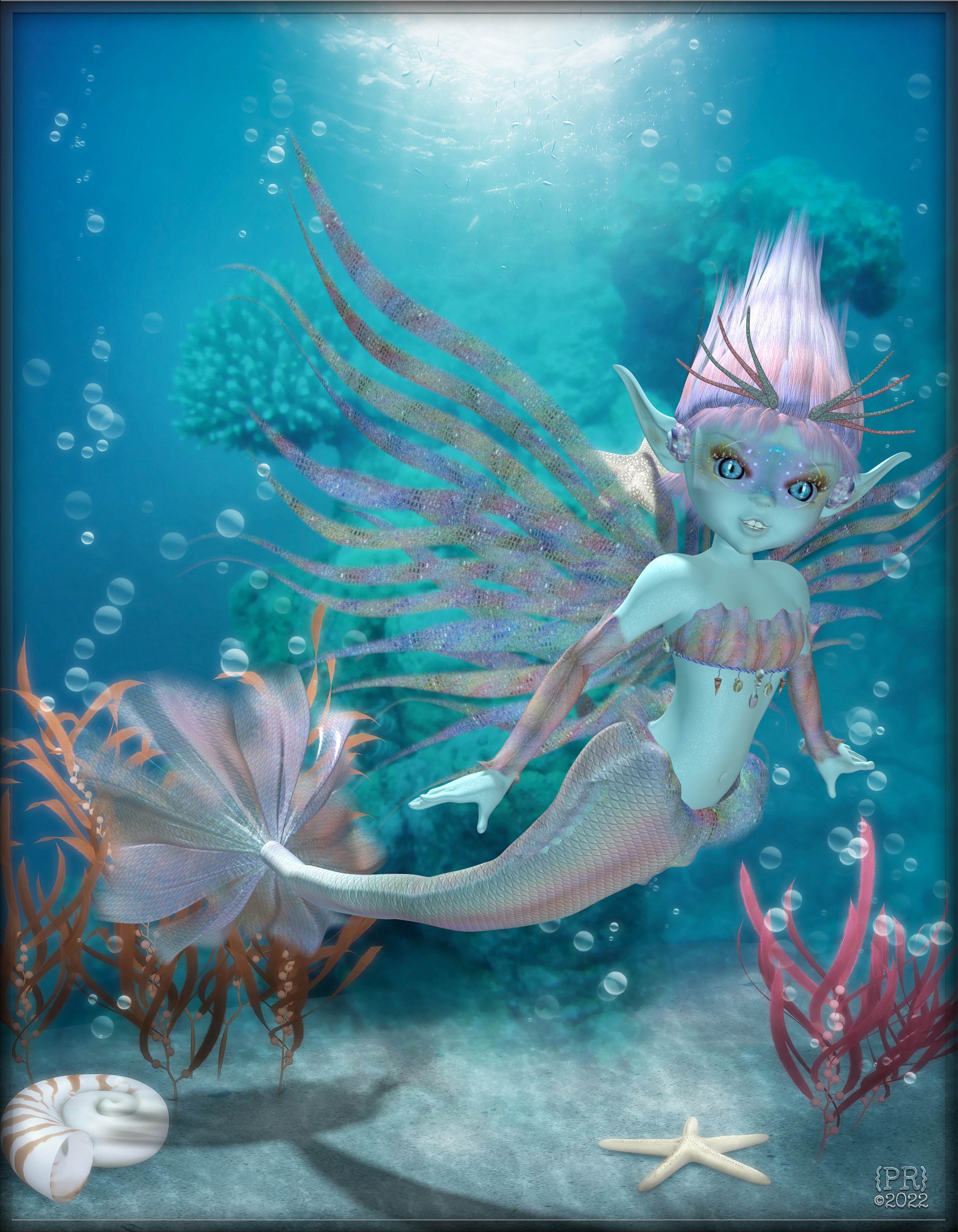 She’s not a mermaid or a fairy… she’s a merfae! ==AMY’S NOTES== I bought a few background packs on sale recently, in hopes of inspiring myself to learn how to integrate rendered components into background scenes, and for the most part the process still flummoxes me, esp. the lighting. But when I saw these undersea backgrounds by Sveva, I could imagine both some possible subjects and some possible ways of lighting them to match the background, and this render is the result of one such experiment :-) FYI: I did not use the lights that came with the set as they don’t appear optimized for Firefly in its current incarnation. Rendered in May 2022 using Firefly in Poser Pro 11.3 for Mac at 2800 × 3600 pixels. View full size on my blog. ==CREDITS== SCENE: Background image from Aquatica Backgrounds & Lights by Sveva. CHARACTER: Amity figure, MerFae character, hair, and outfit by 3DTM.

This is a super looking scene, and the MerFae is lovely. Great background, color and settings. Marvelous!

Thanks so much! The background seemed like a good match for the little MerFae character!

Aw It's a beautiful render of this character.

Thanks so much, Gisela! The mermaid character for Amity is very pretty, so I'm surprised I haven't seen more of it!

you have a jaw dropping fantasy piece here. wow!

Thanks so much! A lot of the credit goes to Sveva for the neat background and 3DTM (now DragonFly) for making such a cute character and outfit for Amity!

Stunnning scene and character, wonderful details and amazing use of colour, first class work and render..!!

Thanks so much! I like how the colors all came together :-)

Beautiful!!! Love the whole color scheme of this.

Thanks! I had several options for colors, and I like how these worked out :-)

What a wonderful character. Beautiful image

This is outstanding! I'd say your experiment was very successful! It is so lovely that I keep coming back to look at it again & again!

Aw, what a nice comment! Thanks, Flint_Hawk :-) Amity is a cute character, and the MerFae textures are pretty nice, so it's too bad they don't get used more often! But that just means more fun for me :-) 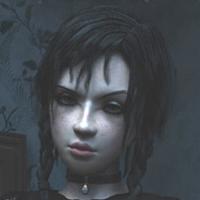 It is a delightful image. As for the direct use of background in Poser renderings, I know practically nothing. Is there any tutorial about it ? It would be really useful....

Thanks so much, Roberta! There is a tutorial available here by Sveva on blending renders into backgrounds, but I didn't use what I learned from that one to make this scene. With your proficiency in Photoshop, you probably already know what that tutorial covers.

For this scene, I loaded the background image using File->Import->Background Picture, and I changed my render size to match the picture's dimensions.

For lighting, I used a white infinite light that pointed down towards the figure's back, to match the sunlight shown in the background image. I also used an IBL light at around 50%, and I put the background image on that (to project the colors into the scene). I may also have used a very low intensity point light, set to inverse linear and light blue, in front of Amity near the camera. I don't recall doing that, but the way she's lit makes me suspect that I did.

I put a one-sided square under the figure and set it to be a shadow catcher only (by ticking that box in the square's Material room properties), so that the final render would show a shadow of Amity's mer-tail.

I'm still learning to work with backgrounds, as the lighting in particular can be tricky. But I hope these notes are helpful!

Such a cute fantasy mermaid1

love your lighting here.. gotta say tho, the first thing i thought of when viewing was 'now i want sherbert' - prolly due to all the lovely and delicious pastel colours... and now i'm hungry!! lol...

Ha! Yes, very sherbet-y colors! I hope you got to enjoy a bowl :-) Thanks so much for the comment, Giana! The lighting was a little tricky to set up, but I'm pleased with how it came out!

Very beautiful, I have to get these backgrounds now. or try to emulate this within Superfly. Great work!

Thanks! Rendering a figure to use against a background image is a really "old school" way to use Poser, from back when most users had computers that couldn't handle a lot of backdrop props. For most of the time I've used Poser (since 2014), I've preferred to set up backdrop props in the scene, using background images only for things like the sky or a distant view behind the props. That seems to be how most Poser users do it these days. But I got intrigued by the possibilities of background images for several reasons. I love the way Clemenceau uses them in various detailed composites, but I was also looking for ways to simplify the render process so that I wouldn't so easily get discouraged by the difficulties of dealing with a more complex scene. I also wanted an excuse to focus on some characters rather than on backdrop props and settings, since I can tend to get distracted by cool props.

I don't see why Superfly wouldn't work the same as Firefly when it comes to rendering over a background image, except that in order to get the background image's colors into the scene, I put it on an IBL light, and those lights don't work in Superfly. There must be another solution, like putting the image on a light emitter prop.

The hardest part about using background images is figuring out how to set up your lighting to match what's in the image. When I look through background image packs, I try to imagine how I'd light a scene in each image, and if I can easily imagine how in at least half the images, then I consider purchasing the pack. I particularly like backgrounds that were made using apps like Poser or Vue, as opposed to those made from photographs. You can probably find some nice free backgrounds just to test out whether you like the results!

A very beautiful and marvelous realization on this superb creation! Many hat is off to you for such a sublime work! Many many fine kudos from me to you on this one!!!!!

I have that aquatica set, too, and you chose wisely using your own lighting, I think! XD You did a great job meeting the most important challenges: angle of light and shadows matching the background and matching the color of light in the background. Now, technical matters aside, it's a charming image that my granddaughter informed me is the kind of thing I need to do more often! =)

I probably shouldn't let her look over my shoulder sometimes... >.<

Thanks, Molly! I'm glad your granddaughter liked this one, but unless kids her age are the primary audience for your art, I don't think you should worry too much about changing what you're already doing :-)

I got some of the color of the background into the scene by putting the background image on an IBL light (at 50%). Not technically "correct," I know, as the image isn't mapped like a light probe, but for the purpose of getting colors into a scene, it works!

Very nice! It does look like we've suddenly come up upon her!

An image after my own heart! What an adorable merfae!

Thanks so much for the kind comment, Clemenceau! Your art was a big part of what inspired me to look more closely at the idea of using background images :-)

I think it's good that these old characters are brought back to life again, because they're all too good to just gather dust in a drawer!

Thanks, Ute! I think several of us who post to the Poser gallery get a real kick out of using older content and showing that it still has plenty of creative uses left :-) There's a creative freedom that comes with the limitations of using older stuff!

This is just pure magic, nothing more.