Zeus, the airfields Moggie by FurNose 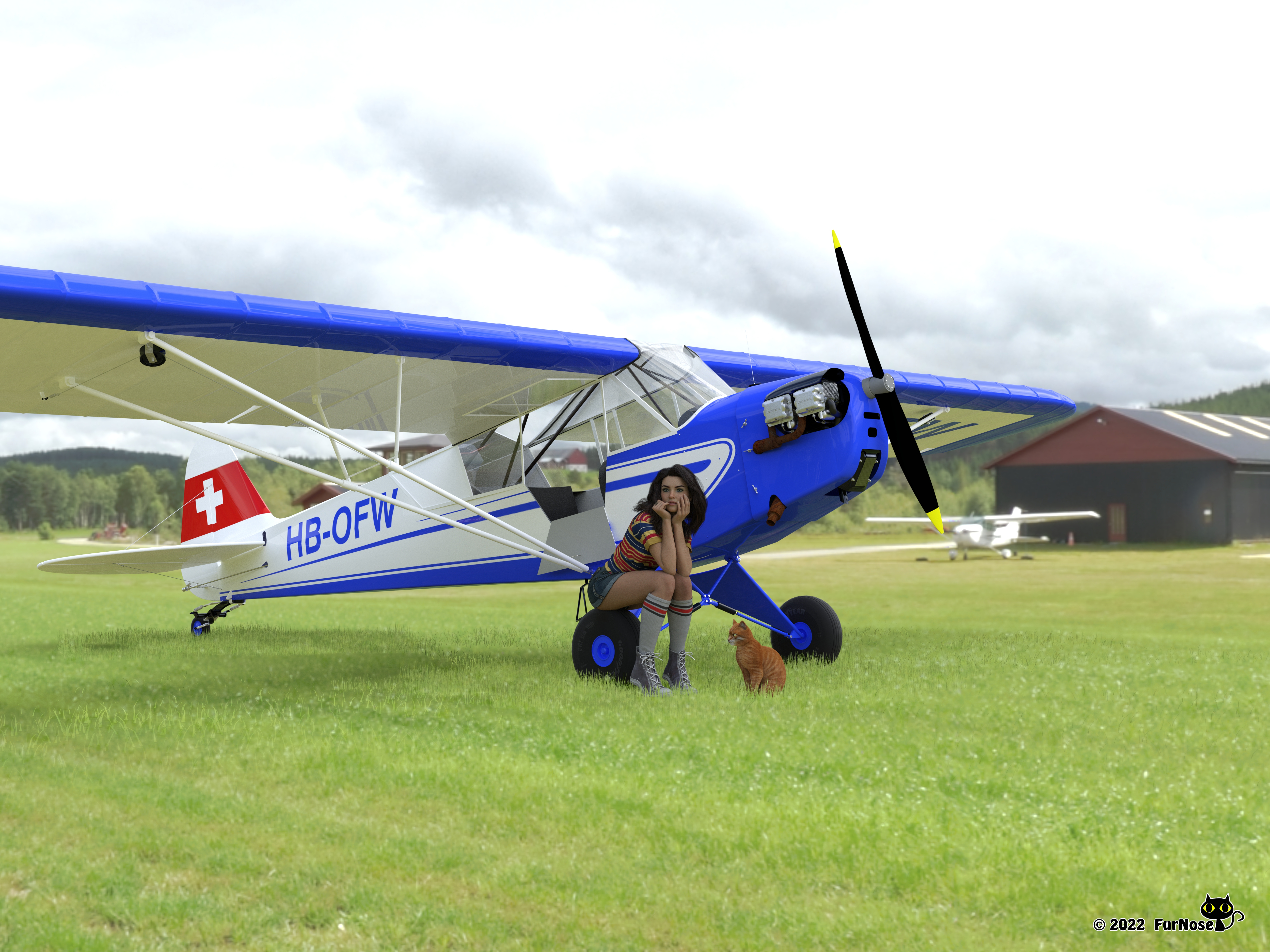 Stephan was sitting at his desk doing some paperwork when Cassia, visibly nervous, came into the barracks at the end of the airfield. "Good Morning" "Good morning, Cassy" he replied. "Everything okay? Are you prepared?" he asked without lifting his head. "Yeah, I'm fine, thanks" she replied, trying to appear calm and deliberate. "Do you like another coffee before the flight?" "Uh, no thanks, I'd rather have it after". She pulled her logbook out of her pocket and put it on the counter. while she was flipping through the pages, each entry brought back certain memories. After a while, Stephan put down his pen, put away the forms he filled and looked at her. Yes, he'd had many a student pilot, but she was exceptionally pretty and very smart. She could attract the attention of a whole ball room in a pretty evening dress, and at the same time he has seen her working on the four-cylinder Continental boxer engine with oil-smeared fingers. "Listen, I have to make a quick phone call, but you can go ahead and get the "Foxtrott - Whiskeyy" ready. It's still almost full, and there's plenty of fuel for the flight." "OK!" She folded the logbook closed, put it in her pocket, hung her bag on the coat rack and opened the door to the flying field. It was slightly cloudy, but never the less beautiful weather. Before she could close the door again behind her, a little wind gust blew a few leaflets form the counter. The Piper was parked out in the field, at the end of the grass runway. She walked over to it, opened the doors and put the logbook in one of the side pockets in the cockpit. Then she began the exterior check exactly the way she learned it and always did.. She removed the pitot cover, checked the wing for damage, went to the left aileron and checked the hinges and their ease of movement. Then the elevator, rudder, tail gear and along the fuselage to the right aileron. back to the fuselage, main gear, wheels, tires, engine, no foreign bodies in the oil cooler grille, propeller blades.... everything in best condition. She looked over to the flight school barracks and could see Stephan gesturing through the window with one hand while he held the phone to his ear with the other. "Well. Now it was getting serious." she thought. She almost couldn't suppress her nervousness anymore. Since everything was done, she sat down on the right wheel while waiting for Stephan and went through everything again in her mind. Actually there was nothing to be nervous about, because she did it all a hundred times at least. She knew every step and every move exactly. Suddenly she felt something on her leg and she winced briefly. "Zeus! You have frightened me! Hey, how are you, you old warhorse?" Zeus, the cat of the flying field rubbed his head against her leg and wound his tail around her leg and looked at her. "Well, you cuddly monster. Are you going to get your cuddles again?" Zeus gave her a long meow, went to the boarding door and jumped into the back seat of the Piper. "Hahaha, you can't fly with me. I'm doing my first solo flight today and Stephan isn't on it, but no passengers either! And after that I need some more flight hours and the final license, before being allowed to carry passengers. Zeus didn't seem to bother about that, turned and lounged on the seat and made no effort to leave the cockpit. She had to laugh - oh how funny cats are. His look told her clearly: "cuddle me" and she complied with the request. She stroked all her nervousness into the fur and at the same time carefully took out one or the other burdock that had gotten caught in the fur from roaming around in the bushes and grass. How good it was to bury her fingers in this thick fur. After a while she heard footsteps in the grass and Stephan stood there. "Oh, has Zeus already briefed you? Well then nothing can go wrong." Both laughed and she felt how her nervousness has already greatly diminished. Then Stephan took the cat on his arm and said to him: "Come Buddy, you have to let Cassy fly alone. She will certainly give you a little Belly tickle when she is back". "Sure I will!" she replied, stroked him over his head and climbed into the cockpit. Then Stephan gave her final instructions before she closed the lower door and went through the "before startup check". Stephan went a few steps back, still holding Zeus tightly in his arms, gave her a thumbs up and heard a final "Clear Prop!" from Cassia before the boxer engine started and the noise of the propeller drowned out the rest of the words of the "before Taxi-check" Yep! Every flight school needs a furry instructor... I recently read a book about Felix the Huddersfield station cat and had to learn, that some of Great Britain's railway stations had a tradition in having a station Cat as "pest control" (Rats and mice) which became the great attraction of the station. So possibly airfields have similar traditions? I don't know... Used Zeus for the first time in this image, although i bought him quite a while ago. Oh and of course I had to use one of the Piper L-4 variants of 3DClassics Piper J3 Bundle (DAZ-Version) soon to hit the Renderosity Marketplace. Credits: Piper L-4 from the PIPER CUB BUNDLE for DAZ Studio soon here in the store (the Texture for Oscar-Foxtrott-Whiskey is included in the DAZ-Version) Cat Zeus by Vyusur @ DAZ3D AJC Boogie Roller Girl Outfit and Boombox for Genesis 8 and 8.1 Females by Adeilsonjc @ DAZ3D Bronwyn Hair for Genesis 3 & 8 Female(s) by AprilYSH @ DAZ3D All pure IRAY-Render without Postwork - except for the Logo Hope you like it

Sabby-Cassia for Genesis 8
By Sabby

When I was younger, I went to an airfield similar to this. The plane pulled a glider I was in, with a pilot, down the run way and then released us higher up. I remember the white puffy clouds and the checkered land below. Just the sound of the wind as I imagined how a dragon must feel, so cool... 🐉

Luv the grass and the kitty, of course. Thanks for the flashback... ;)

I visited "Silent Wings Museum" in Lubbock, TX where service people were trained to fly Air Force gliders. I had the honor of meeting one of the pilots that flew into Pegasus Bridge during WWII. Unfortunately he passed away 4 to 6 years ago. A distant relative's father(deceased) from England was also a pilot. when he was visiting here, I took him to meet Dick(recognized by the queen of the England) for his heroics and his name was Dick(Richard). I was called Dick(Richard) when I was a teenager. I enjoy hearing stories of Veterans. STEVIEUKWONDER a member here father was a hero by saving some nurses that was hiding in caves and homes of friendly citizens. The Queen of England also honored him for saving the nurses.

It's a big step, and it's good she has someone to ease her mind a bit. Great work on this scene, and delightful story.

Fantastic picture, and a great story!

Well, well, well...but these dangerous animals (I don't like cats much !) could catch and kills birds which is unacceptable ! Super image...with or without the cat !

Hahaha! Come on Gaius! The most Birds that are extinct, are so because humans robbed them the space, environment and needed Nature to breed and live.

I like the story and the image. If my friend Gaius does not like cats, I do love them, even if they kill birds. Nobody's perfect!

Very cool image and story...first class lighting and render...and good to see you've had no other issues.......

Great info for our dear Gaius, cats are hunters no matter how big or small they are, that's their survival instinct, but unfortunately more and more of these beautiful animals are being exterminated by us humans (such as the snow leopard) which I find horrible as an animal lover (I don't want to talk about the bar in my heart, but you certainly know which country I mean by that and I hate them for what they are doing)!

The wings of this plane are very impressive. The, so charming lady Cassia, and Zeus make the whole even more beautiful.

A very fine image and most well told story! Most impressive all around! Love Zeus! What a wonderful cat! Great job on this one! Many fine praises from me!

lovely scene and write up - thanks for sharing

A great render and story!