A Haven For The Weary, Pt. 4 by MioraaNyte 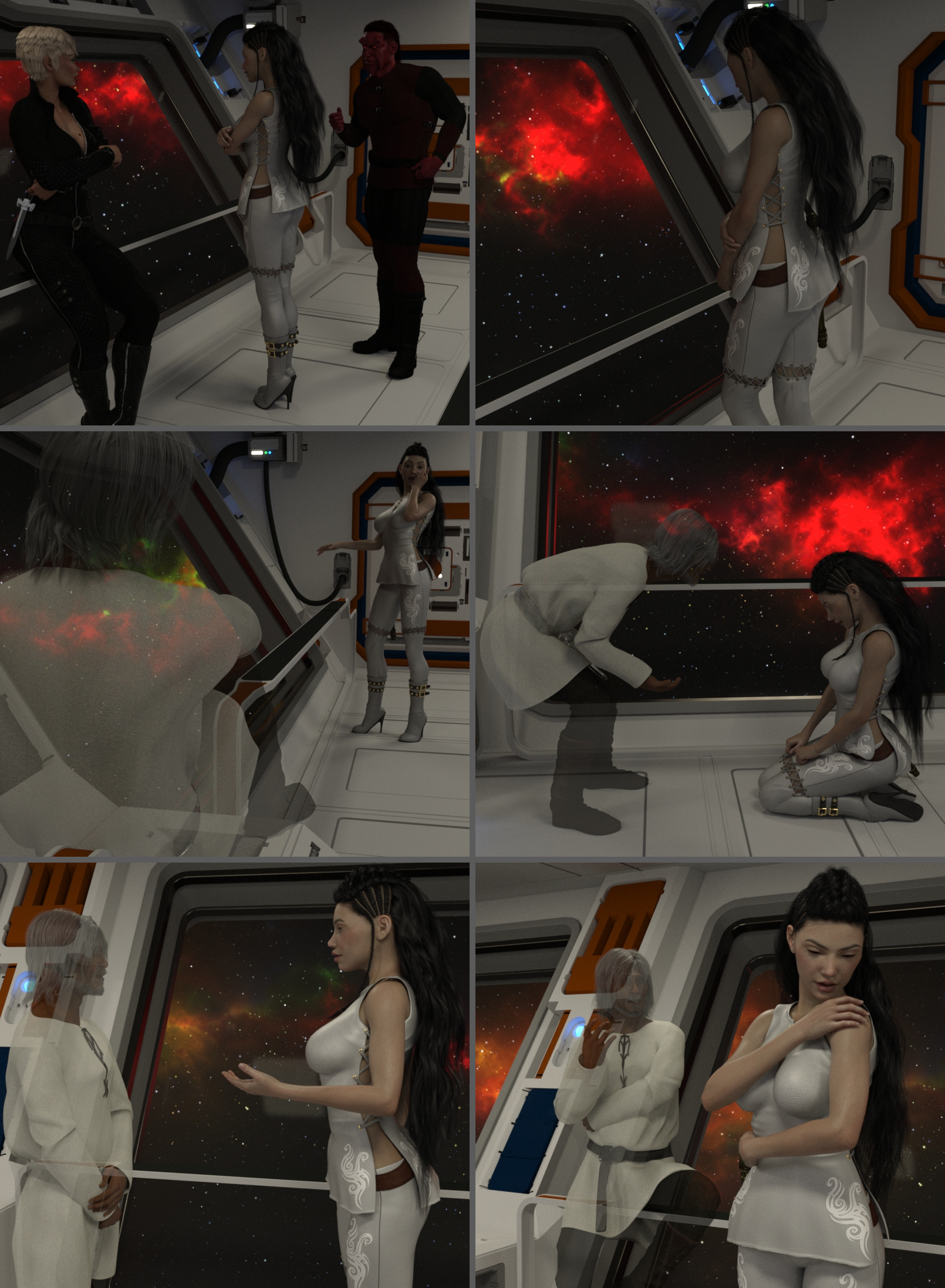 Stopping along the way back to their quarters, Xin paused to gaze out one of the observation windows to stare at the nearby nebula and recall the previous events.  "I don't understand how she could hesitate to join our cause," Xin sighed, "surely she must realized the stakes and what will happen if the Mandalorians don't get involved in the struggle."

"Trust me," Jeldark replied, hoping to ease the woman's worries, "even though her clan would follow her orders without hesitation, she is wise to consult with them first."  Then added, "she is much like her father, her people come first and their unanimous approval will leave no doubt to their commitment in what lies ahead.  Mandalorians will never shy away from a fight, especially if they truly believe in the cause."

"He's right, sweetheart," Dara chimed in and then with a slight laugh continued, "if I know the Mandos, they're probably bored to tears with what little action they see here and itching for a fight... any fight.  It may take a day or two before they give you an answer, but I have a good feeling about it.  You just got to have a little faith and patience, which if I recall, is part of that code you Jedi subscribe to."

"Thanks, both of you," Xin responded to her companions, "I'm beginning to feel better about the whole matter.  Why don't you two go ahead, it's nice and peaceful here, I think I'll stay a bit and look out on the nebula before calling it a night."

Bidding Xin farewell, Dara and Jeldark exited the area when Jeldark remarked to Dara, "there's still plenty of time before we need to retire Captain, I was thinking we could retrieve those Rakata star charts from the hold and have D9 study them.  I was able to decipher quite a few over the last couple of centuries and that may help him with the others."

"Sounds like a good plan," the Captain replied, "not trying to be rude, why do you need me along?"

"Well Captain," the Sith answered, "if I were to give your droid the datapads and tell him to start work, he may not be as cooperative as believing the request came from you."  As the corridor hatch came to a close, the last thing she heard from the pair was a laugh from Dara and the first few words of her reply to the man, then after that, only the faint hum of the atmosphere recirculation system to break the silence.

"About time, I thought they'd never leave," came a long familiar voice from the left of Xin.  At first, she ignored it, thinking it was just the lack of rest playing tricks on her mind.  "So Kiddo, hear you've had a pretty interesting week," the voice continued, "and what's up with this crap about quitting the Order... care to explain that one?"

Turning in the direction the voice came, Xin gasped in both astonishment and fear, crying out at the apparition she saw sitting on a support outcropping, "Master Korgan, it can't be, you're... dead!"

"You noticed," the spirit of her old master chuckled, "yep, dead as a doorknob."  Then rising to his feet, Korgan's ghost went on, "now that we've got that settled, you want to answer my question... why did you leave the Jedi?"

Dropping to her knees, Xin began explaining how she thought the Order had abandoned their own teachings and broke their promises to Jeldark by imprisoning him after he had done his best to uphold his side of the bargain.  So she decided to leave the Order and break him out of prison.  "I felt I could no longer be a part of any organization that practiced such hypocrisies," Xin told her old master, "so I left and freed an innocent man.  Forgive me old friend for letting my feelings take control of me."

Bending down to address his friend and once former Padawan, Korgan stated, "get up Xin, you have nothing to apologize to me for.  Jedi aren't machines and no matter what the code teaches, there will always be emotions, it's how we deal with them that actually matters."  As the woman rose to stand, the spirit went on, "and by the way Kiddo, the Jedi had nothing to do with your friend's misfortunes, it was the politicians.  Had you taken my old seat on the council as you were offered, you would have known the council was working hard to get him released and live free within the Republic as he was promised."

"So by breaking him out, I compromised the whole situation," Xin replied, "why didn't somebody tell me about this?  The council knew my thoughts about it... especially Grand Master Shan!"

"Don't be so hard on Satele," Korgan admonished his former padawan, "she of all people wanted to tell you more than anyone, but couldn't risk news of the negotiations going public or it would've jeopardized the whole deal."  Taking a seat on the railing, Korgan continued, "but now you have even bigger problems than being branded a fugitive, you and Jeldark are trying to find a powerful ally from the dark side to help out taking down the Emperor.  And also it seems, quite a few others... I never would have considered the Mandalorians, but they are very good at what they do. Can't deny that."  Pausing for a moment, he added, "they say the third time's the charm, personally I think you've got a good shot at it this time."

Suddenly turning from her old friend, Xin let out a choked response as tears began to fill her eyes, "I hope so Master, I'm so scared... ... ..."

Absolutely love how your narrative and your images so closely match.

And as always, very well done. 👍

Been awhile since last page. Well done on this one.

Marvellous installment in the story!

An enormous and beautiful work combining the image and the text, it is particularly remarkable !!

a perfect combination of images and text !!

I just love the way you're able to not only tell your story with words, but also add such wonderful images to make the whole experience even more enjoyable.

You are an amazing mind. Your talent for writing and illustration really sets you apart. Your gallery is always a FAV for me to come to. Thank you for some amazing adventures.