A Haven For The Weary, Pt. 3 by MioraaNyte 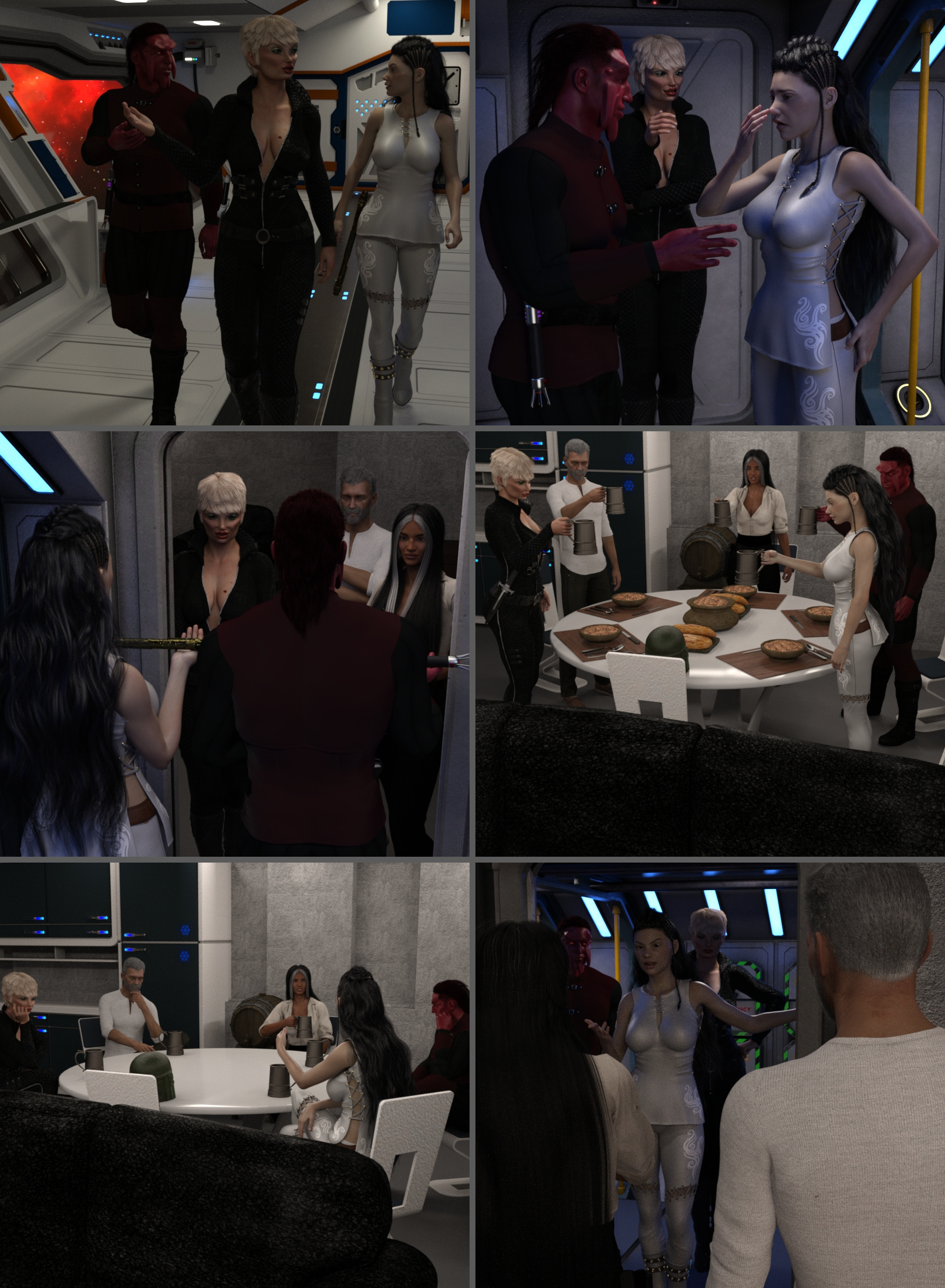 "Remember," Jeldark said to Xin as they approached the habitat area, "the Captain will enter first after we are welcomed into the Matriarch's home and before we enter, we will offer our lightsabers for her to secure."

"Okay, I got that part," Xin replied, "then after that, you will give the the traditional greeting and as her representative, Dara will  take the weapons for safekeeping, then what?"

"Then I will ask you to enter on her behalf," Dara told her friend.  "Don't forget, the Mandalorians respect strength, courage and honesty.  We will need their help one day and it's up to you as our leader, to convince her of this," Dara continued, "I know you don't want to put any more people in harm's way, but as Jeldark has said, we need to get everybody in the galaxy we can get to fight the Emperor... Force users or not.  You'll find no better warriors than the Mandos for this and if you can convince her to join us, she can get more clans to come on board."  After pausing for a moment, Dara added, "don't be afraid to be confrontational, lay it on the line what will happen if they don't help us.  Mandalorians do not fear death in fighting for a cause they can believe in, just sitting around to be exterminated without trying to do something about it goes against their core beliefs."

As the trio came closer to the Matriarch's quarters, Xin couldn't help herself as the aroma within the corridor began to burn her sinuses and eyes, "by the stars, what is that?"

With a slight smirk, Jeldark answered, "that, my dear Xin, is tingilar... and by the smell, I'd say it's her father's recipe."  Still amused by her reaction, he went on, " and I'd say she improved on it.  Don't worry if it brings tears, even the hardiest of Mandalorians would start to sweat.  But the test of your worthiness is not that. it is how you handle it,"  almost as an afterthought, Jeldark added, "meals always begin with a toast to the fallen, without appearing to do so, let the ne'tra gal sit in your mouth a few moments, it will help deaden the nerves.  The rest is up to you to control."

Turning to the door to press the chime panel, Dara stated, "here we go, just follow Jeldark's lead at introduction and it'll be alright.  Ana won't expect perfection from you since you're not Mando."  When the door opened, Dara greeted Ana and entered, then turned to her companions as a cue for Jeldark to start the welcome ceremony.

Unholstering his lightsaber and presenting it to her, Jeldark addressed the Matriarch, "it is an honor to be invited into your home, Aliit'alor.  Knowing I will be safe within, I present my weapon for your safekeeping."  As instructed, Xin repeated the man's actions and words.

Reaching to take the lightsabers from them, Dara replied, "on behalf of the Matriarch, I accept your trust and welcome you to her home."

Motioning for them to enter, Ana said, "welcome to our home, honored guests.  Be at ease that we will protect with our lives to assure your trust."  Leading the way toward the dinner table, she once again spoke, "we ask you join us for a meal to strengthen yourselves for the battles ahead."  As the group gathered around the table, Xin noticed a Mandalorian helmet upon it  in one of the place settings.  Reaching for her tankard of ne'tra gal, Ana raised it toward the helmet and said to the gathering, "a toast to our fallen brethren, may their bravery and sacrifice forever be remembered."  Following her lead, the group also raised their drinks in salute to the fallen.  When completed, Ana then told her company, "please be seated and enjoy your meal."

Upon taking the first bite of the tingilar, Xin's mouth began to burn as if she had just spooned in molten durasteel, her natural reaction to the potent stew was to want to spit it out, but she held firm and continued to eat.  Not noticing the slight smile on the Matriarch's face, she forced herself to compliment, "quite flavorful, I can't believe I've ever had the pleasure before now.  My compliments to your culinary skills, Matriarch."

Unable to contain herself, Ana replied with a laugh, "Master Jedi, you are a terrible liar, but you have grit and you handle yourself like a true warrior... I like and respect that.  A sip of the black ale will help ease the pain," then turning to Jeldark said, "earlier today, you said you were present at the Battle of Zyliv'Gor and my founding, I find that hard to believe.  Perhaps you care to enlighten me on how a man that looks so young could have been there."

Answering the Matriarch's query, Jeldark told her his life's story and about the "gift of immortality" that the Emperor had placed upon him.  As he completed his narrative, Ana responded, "though as fantastic as it would seem to most, I've heard tales and rumors of the Emperor's powers, I guess they're not all without some credence.  By the way, you look very good for someone of your advanced years."  As Jeldark let out a laugh of his own and thanked her for the flattery, Ana again turned her attention to Xin, "and you, Master Jedi, what is your story?"

Xin began telling the story about how she and other Jedi attempted to capture the Emperor and their failure, then about her brainwashing and eventual rescue by Jeldark.  Explaining further about her and Jeldark's second attempt, the broken promises upon their return, his imprisonment and how she helped him escape, then about her visions of a powerful dark side ally to help them.  "And now, I... we, are on a quest to find this person.  But she and I will not be able to do this without help from others, the Emperor is just too powerful."  Then with a bit of resignation in her voice, said, "we need people like you, your clan and others like you to even have a sliver of a chance to rid the galaxy of this threat.  In all truthfulness, we may fail, but at least we don't go down without a fight."  Then pausing to regain her composure, Xin continued, "I know Clan Vo took an oath to protect Haven, I am not asking you to break that.  I'm asking that you help us, as much as you can when the need arises... not only for the sake of Haven, but for everyone."

Responding to Xin's words, Ana said, "you make the situation sound hopeless, Master Jedi.  But you do have a point, it's better to die on your feet fighting than cowering in a corner waiting to die.  I will discuss this with my clan and give you our decision when we come to it."

As the night came to a close and the trio stood at the door exchanging farewells, Xin once again petitioned the Matriarch, "thank you for the meal and your hospitality.  Though I know very little about Mandalorians, I do know this... they are a brave and honorable people willing to give their lives for a cause they believe in.  What greater cause can there be than to fight for life itself?"  Then wishing their host a good night and turning to leave, Xin informed the Matriarch, "I will await your answer... ... ..."

Great to see you again. I am looking forward to seeing many more.

Remarkable work on this page of images as well as on the text, bravo my friend

Good to see you back, see you haven't lost your touch. Excellent story line and accompanying images.