A Haven For The Weary, Pt. 1 by MioraaNyte 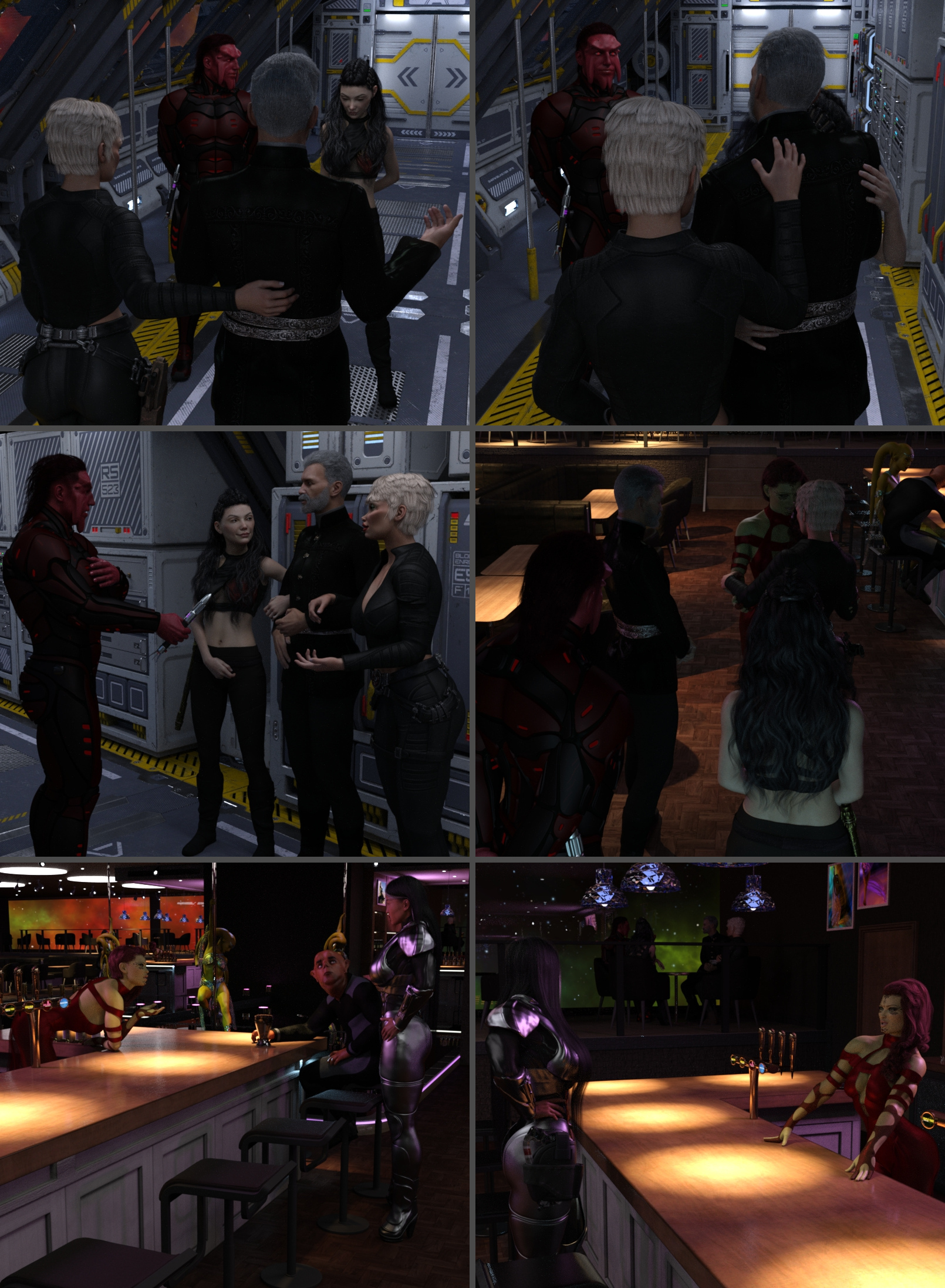 "Xin, little Xin Quon?", Nico asked in amazement of the young woman that stood before him.  "The last time I saw you was eight years ago, a scrawny little adolescent street kid from Coruscant that old Master Korgan took as his padawan"  Still partially in shock, the man commented, "now look at you... you've blossomed into a beautiful rose."

"Enough small talk, come here and give this old man a hug," Okarr told the young woman, "or are Jedi allowed to show that kind of emotion and do that?"

"For you, Master Okarr," Xin replied as she wrapped her arms around the man in a loving embrace, "it will always be allowed."

Returning the hug, Nico spoke softly to his young friend, "you don't have to call me Master Okarr, you're all grown up now.  It's just Nico from now on... okay?"  Then gazing over Xin's shoulder, the man noticed Jeldark standing there and said, "peculiar company you two are traveling with nowadays. Would either of you like to introduce me to your Sith friend, here?"

Stepping up to face Okarr, Jeldark addressed the man, "an honor to meet you Master Okarr, your name is quite legendary, even within the Empire," then with a slight frown added, "though I'm afraid it's not very flattering there."

Placing his hands on his hips, Nico replied with a slight laugh, "that I do not doubt," then changed to more serious tone, "this is Haven, Sith... neutral territory.  Here, neither the Republic or the Empire rule.   All are welcome as long as they don't cause any trouble, then they become very unwelcome and are dealt with accordingly."  Allowing a few seconds for his words to register with his new guest, he continued, "is that understood, sir?"

"Completely Master Okarr," Jeldark told the man, then reaching to remove his lightsaber from his hip, presented it to the man hilt first, "as a sign of good faith, I relinquish my weapon for your safekeeping."

Giving her adoptive father a squeeze around his arm, Dara spoke on the Sith's behalf, "Papa, this is Jeldark," halting for a breath, added, "there's no denying he is Sith, but he is also a decent and honorable man."

Feeling a similar squeeze on his other arm from Xin, Okarr looked upon the young woman's face as she gave him a smile and nod in agreement.  Turning his gaze back to the Sith, Nico stated, " considering the reputation the Sith generally hold around the galaxy, you seem to be the exception."  Looking down at the lightsaber being offered to him, he once again returned his attention to the man, "you can put that back, son.  My girls here vouch for you and that's all I need to know," then with a slight chuckle, "besides, I believe that if you did want to cause any trouble, you wouldn't need your fancy glowstick to do it."  As he watched Jeldark holster his weapon, Okarr remarked, "and you may also call me Nico... I already feel old enough some days without having the word 'master' attached to my name adding insult to injury."  Gently breaking free from the two women's grasp, Nico took a few steps toward the corridor's exit, "follow me folks, we're heading over to Questral's so we can relax over a drink or two and continue our little chat.  After all, I'm sure it's 1700 hours somewhere."

"Dara!", the Mirialan exclaimed as the Captain entered the door, then running from behind the bar, clasped her arms in greeting, "good to see you again doll, staying long this time?"

Returning the woman's warm welcome, Dara replied, '"probably not. Laulara.  Hopefully long enough though to catch up on the happenings around here since I've been gone."  Looking around the club, Dara returned her attention to the Mirialan woman, "this is yours now, what happened to Gorado?"

"Long story, short," Laulara replied, "one day he decided to pack up and leave for Rishi, told he bought himself his own resort island there."  Then laughing, "called me in that morning, handed me the keys and said the place was mine.  It was a little bit of a shock, but he told me I deserved it after all the times I saved his ass from being kicked by angry drunks and ex-wives."

As both women broke into laughter, Dara turned to her companions and introduced them, "Laulara, these are my friends Xin and Jeldark. And guys this is Laulara Questral, former commanding officer of the Republic Army's renown Havoc Squad and now proud owner of this fine establishment."  After the three exchanged greetings, Dara inquired, "by the way, how's Elara doing?"

"She's been our acting doctor around here since old Doc Quincy passed a little over a year ago," the Mirialan responded, "most of the time she's treating kid's skinned knees and sniffles, every now and then, I send her a couple of unruly customers to stitch up," then smiled and added, "she gives me hell about it later, but I know she welcomes the diversion... she's just too prim, proper and stubborn to admit it."  Turning her gaze to Nico, she said, "as you can see, it's dead as hell in here except for Nrom and Raina practicing a new routine for tonight's show... so tell me what you all want, then pick a spot to park and I'll get you fixed up."

As things settled down once more, a tall woman entered the bar wearing brightly polished Mandalorian beskar armor.  Walking over to the bar, she spoke to the people there, "hi Laulara, was told Nico was here with Dara and a couple of new arrivals," then placing her hand upon the male patron's back that was also there told him, "welcome back Nrom.  The teachers over at the school asked me to relay their thanks for the treats you brought the kids. They say you've got a heart of pure aurodium and the children think you're the best."

Looking up from her conversation with Nrom, the Mirialan replied, "yeah Ana, they got here about ten minutes ago," then went on to ask, "before you head up there, can you spare a few minutes to talk?"  Acknowledging the woman's request, both moved down the bar to speak privately.  "As you can see, Dara's back home and she brought company," Laulara informed the woman, "Both have lightsabers.  Not a hundred percent sure, but willing to lay odds the girl's a Jedi... the man however, definitely Sith."

Looking in the direction of the group, Ana asked, "not causing any problems is he?"

"Nah, in fact, he's been a perfect gentleman.  And that's what worries me a bit," Laulara informed her, "you know what I was before coming here.  Let's just say my past experiences with Sith have been anything other than cordial."  Then with a sigh concluded, "but this is Haven, neutral territory and all are welcome as long as they behave...perhaps it's just me, but I still get the willies around those guys."

"Thanks for the heads up, Laulara," the Mando replied to her friend, "I'll pass it along to the rest of the department to be ready, just in case.  But like you said, as long as he plays nice, he'll be a welcomed guest."

Turning and walking toward the steps leading to the upper level, Ana thought to herself, "into the nexu's den... ... ..."

Great writing and images. Though the last 3 panels seem a bit dark, I can understand the situation takes place in a bar which is usually a dark environment.

BTW... Nrom??? Why does that name and character seem kinda familiar? 🤔

each panel is full of interesting developments with story. excellent lighting and character use.

Agree : each panel is full of interesting developments with story. excellent lighting and character use.

So very detailed and well crafted. Both the storyline and the artwork are beautifully done. Your attention to detail is very admirable. I can tell your work is a labor of love. You are to be commended

I've always loved the Star Wars universe (pre-Disney/Kathleen Kennedy) since my Dad took me to see "A New Hope" back in 1977.

After semi-retiring, I got hooked on the game Star Wars: The Old Republic which I enjoy playing very much. Taking place approximately 3000 years before the movies, I found the lore to be fascinating and more in depth than the movies were ever able to convey. The characters you can play each have their own history and aren't limited to being either super-goody-two-shoes Jedi/Republic or kill-everything-that-moves Sith/Empire... but can be good, bad and/or ugly... like real life people.

To entertain people with tales of the Galaxy, Far, Far Away is a pleasure and when one truly enjoys what they do, it is never a labor... only love.