Chasing A Dream, Pt.7 by MioraaNyte 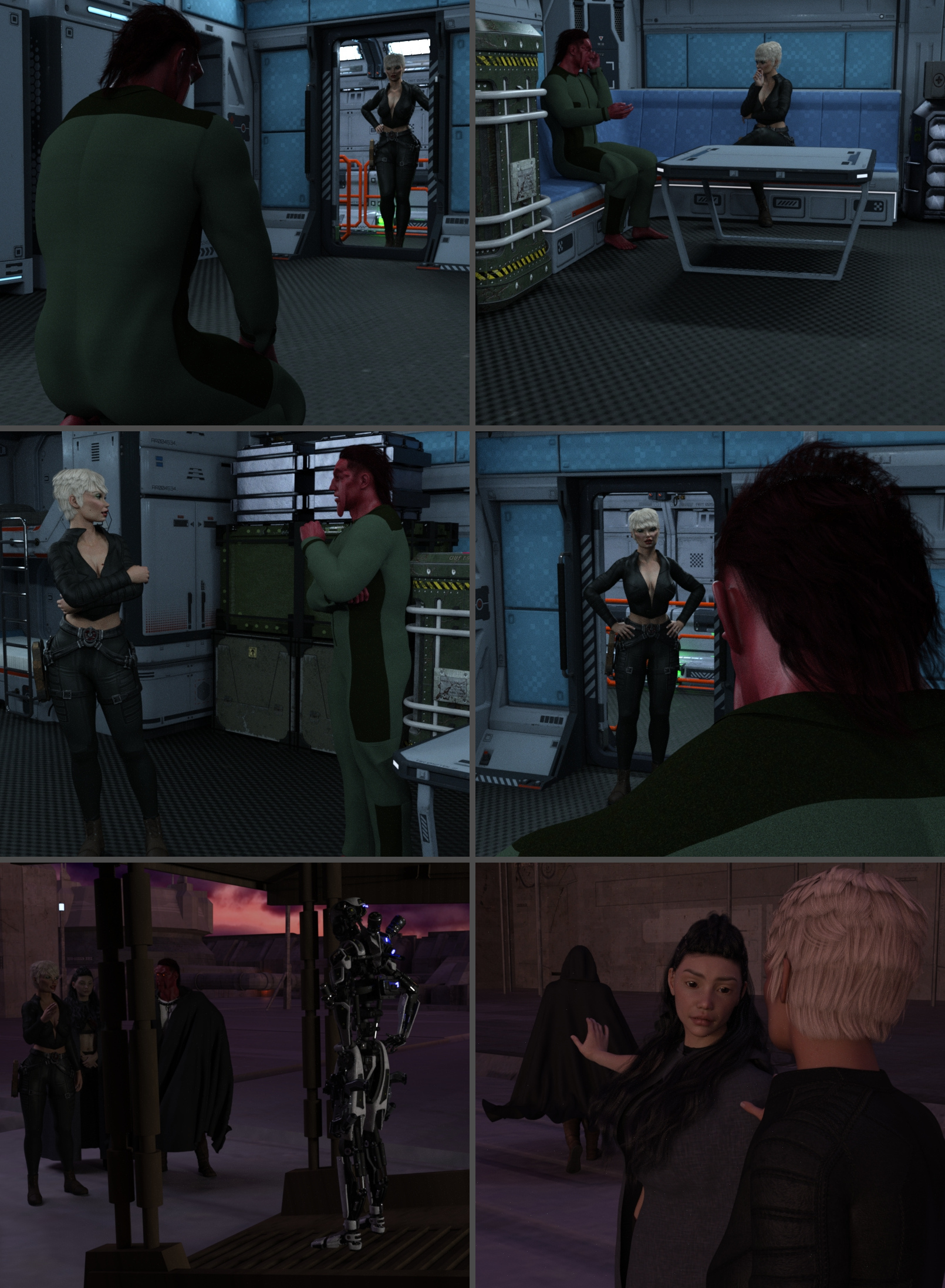 "D9 said you wanted to see me," Dara addressed the Sith as she stood in the doorway of the old crew's cabin.  Noticing the man seemed to be in meditation, she added, "looks like you're busy, I'll come back, later."

"It's alright, Captain," Jeldark responded, "I'm glad you came so quickly.  Please, come in and make yourself comfortable."  As he rose from his kneeling position, he told the woman, "it seems harder to concentrate lately, any way.  Besides, I have an urgent request to ask of you."

Entering the room, Dara looked around and noticed the cargo that had once littered the floor, was now neatly stacked along the walls.  "You've been busy," she remarked, then seeing his attire, inquired, "where did you find the clothes?"

"They were in one of the lockers," Jeldark replied, "I found them after reactivating the toilet and shower facilities.  There's also a clothing cleaner in there, and since both I and my garments were in disparate need of washing, I thought it better to wear something rather than sit around naked."  Then with a jovial tone added, "one never knows when they'll have visitors."

As both went to the lounging area and sat down, Dara looked over to the Sith and said, "you mentioned a request, let's hear it."

"To the point, I respect that of you, Captain," the man began, then took a deep breath and continued, "when we reach Nar Shaddaa, I would like your permission to retrieve a personal cache I've had stored there for quite some time."

"Alright, so we'll go get this cache of yours," the woman replied, "I don't see a problem with that."

"Unfortunately, we will not be able to do this together," Jeldark remarked, "the cache is located within the Imperial Sector... a place where neither you or Xin's presence would be welcome.  I must go alone."  Before the woman could register a protest, the Sith went on, "within the cache are both Sith and Jedi relics, along with many ancient star charts.  I believe these could prove very useful to our mission.  On a personal note, I also have clothing, armor and other items in storage that I would very much like to have."  The look of doubt and concern on the Captain's face, prompted the man to include, "I understand what I'm asking of you and I know it's difficult... I'm asking you to trust me," pausing for a breath, he continued, "it's the only way open to us."

Standing and walking toward the exit, Dara turned and stated, "alright, say I agree to this, how do I know you'll hold up your end and not take off?"

"Simply put, Captain," Jeldark answered, "I have been branded a traitor by the Empire, returning to the ship and our mission is my only option if I wish to live."

"What happens if you're recognized," Dara inquired, "what then?"

"I'll do what I have to do," the man responded bluntly, then changing to a more reassuring tone, "like you, I hope it won't come to that.  For the most part, the average Imperial thinks all aliens look alike.  They also do all they can to steer clear of Sith."  Then with a slight smile, "there is the chance I may be recognized, but the chance of anybody doing anything about it... minimal.  Please, believe me when I say not having these items could severely hamper our goals."  Bowing his head for a moment, Jeldark concluded, "no matter what, I intend to retrieve these items... I would rather it be with your approval," then added with a pleading voice, "I also ask that you not tell Xin about this conversation, it would only upset her."

Remaining silent, Dara turned and walked toward the exit then spun around and said, "I believe you when you say these things are important and worth the risk... do it."  Pausing briefly, she looked into the man's eye's and stated, "it also doesn't take a Force sensitive to read your true feelings for Xin, you hide it well from her."

A few hours later, standing on the docking platform at Nar Shaddaa, Dara instructed her droid, "D9 I want you to stay here and get the ship fueled up, even the reserves.  We're going to go shopping," then added, "as the supplies arrive, get them loaded aboard as soon as possible, we may have to leave in a hurry."  After receiving confirmation from D9, the turned to Jeldark and said, "go."

"Jeldark," Xin called out to the Sith as he began to depart, "where are you going?  Wait, I'll come with you!"

Reaching out to her friend, Dara said, "let him go, sweetheart.  He needs to do this by himself."

"But, what if he needs help," the young woman asked Dara, a distraught look twisting her face, "what happens if he gets into trouble?"

"I'm pretty sure he can handle anything thrown at him," Dara reassured her, "he'll meet us back here when he's done."  In the hope of comforting her friend and redirecting her thoughts, Dara smiled and cooed, "now, we need to go get some supplies and while we're at it, get you a new wardrobe."

Placing her arm gently on Xin's shoulders, Dara began to lead her dearest friend toward the lifts to start their extensive shopping trip.  As the pair left the platform, Dara again gave Xin a reassuring hug and smile while thinking to herself, "I see Jeldark's not the only one good at hiding secrets from the other... ... ..."

Your talents for writing and illustration are remarkable.

Congratulations on another wonderful chapter.

such a fantastic chapter in the series, panels, characters and lighting in all scenes.