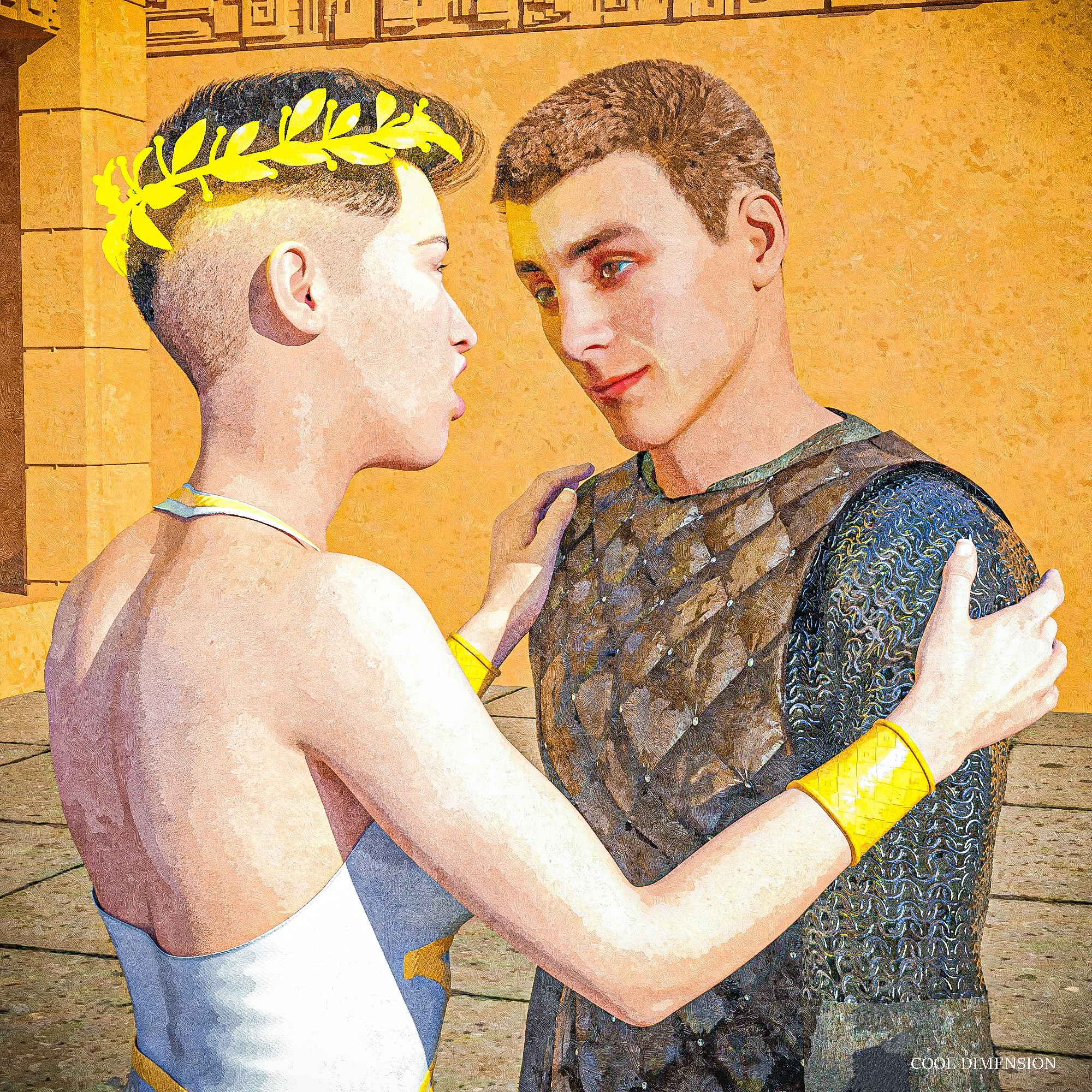 Bay continues telling Mab the secret story of Cubes and Kings: "The wall-rat! " Savante spat. "The runt who wanted world peace! Whose dreams started all of this! What can you possibly DO to stop ME?" "I can give you the truth!" Olar answered as he walked over to Savante Tas and put his arms around her and hugged her tightly, "WHAT are you doing?" Savante said with a gasp! "They made you forget me!" King Olar said. "But now I know the truth.......I love you Mother!" "Love ME?? Are you insane??" Savante said with disdain. "Everything I have done was to destroy you and stop your plans for world peace! I have no family and I have NO son!" King Olar looked Savante in the eyes and paused. Savante was taken aback by Olar's calm attitude. "Mother, Lom overheard the other Ancient Ones talking when you weren't around.They spoke openly about how they made you forget leaving the cosmic realm and marrying my Father! They were afraid your recent obsession with my life and my peace plans would cause you to remember! It was they who tore you away from us and made you forget!" "No!" Savante Tas cried. "It can't be true! It's a lie! A deception!" "Mother, you are now the most powerful Ancient One of All! Reach out with your powers and break through the barriers they placed in your mind! Why do you think you have watched and obsessed over me all these years? Even though you were Brainwashed to hate me, you still subconsciously focused yourself to watch everything I did! Why would you do that?" Savante Tas stopped and turned inward to her own mind. She had been strangely focused on monitoring King Olar's life. As She reached deep into her mind with the greater cosmic power she now welded, she could feel the locks and barriers that had been placed over her memories like a shroud! With a wave of hand, Savante dispelled and broke every lock and barrier to the truth. Memories and feelings long locked away flooded from her subconscious mind! For the first time in ages, she felt love, sadness, joy and despair! She reached out and embraced King Olar as tears begun to run down her face! "It's true! It's all true!" Savante gasped. "Your my son! My beautiful boy! I remember it all now!" With this revelation everything changed! Savante Tas freed King Loam Uhrain from his Ownership Cube and restored his family to their castle. Lom Uhrain was also freed and rejoined his family in a new, second life! Savante Tas made peace with the other Ancient Ones, as she had subconsciously sought to destroy them for taking her away from her life with her mortal husband and baby son! King Olar and King Loam signed a peace and cooperation treaty, bringing the world of Tarris to peace for the first time! The Ancient Ones restored Olar's beloved Tidbit to normal size and did their best to heal the mutilated Gree Molan.The noble knight, Garen Yar, made it his mission to find and stop the traitors Shangar Sin and Abur Mann and destroy their new Slaving Guild. Already many Ownership Cubes had been bought and used by slavers and brigands. Savante Tas went back to the Kingdom of the north with her son, King Olar and together they searched for any family that might have survived the bloodthirsty reign of his Uncle. With her power now supreme, Savante had no fear of the Ancients Ones stealing her life away again! And for awhile happiness and peace reigned mightily among all! The End A Cadet's Story PREVIOUS CHAPTER: CUBES AND KINGS-PART 19-FINALE PT. 1 Cadet Mab continues to tell Gamon Halt, The Overlord's right hand, why he believes he will soon be killed by the Overlord. Bay continues telling Mab the story of Cubes and Kings. (This part of the story is told in prose form) *********The StarBracer/Cadet Mab saga**************** This saga is about StarBracer, a galactic super-powered hero who fights against the tyranny of Galactic overlord Evan Grell, who rules the Zytron empire with an Iron fist of cruelty. Character profiles: This is Mab Elon MAB ELON at Empire Academy Cadet Mab's girlfriend-Linara Brightheart MAB ELON and LINARA BRIGHTHART Mab's friend Tank Melton Mab meets Tank Melton Starbracer-AKA Tryon Khrys STARBRACER Galactic Overlord Evan Grell Princess Zeltron and rebel leader Finnegan Black Our saga begins with the story of a young, eighteen-year old cadet, Mab Elon, who is abducted from his military academy in the early evening and is to be brought to Overlord Evan Grell. Chapter one: a Cadet's Story **************thank you for Viewing!************

Hi, your style is second to none. Great rendering :)

Thank you so much for the wonderful supporting comments! They lifted my spirits! I think you are an extremely talented and gifted artist yourself!

Thank you so much! I appreciate it! I hope the images conveyed enough of the story to follow along, Thanks for viewing and commenting!

Thank you so much, Saby55! That makes me very happy to read!

You put a lot of thought and effort into the series. Well done.

Thank you so much for your kind words and support! I appreciate it and have enjoyed your fun images and stories!

Thank you so much! I am glad you liked the ending!

Thank you so very much, Steve! That really means a lot to me!

Your story telling is wonderful !!!! Keep them coming, you have a great mind and a wonderful style. Bravo !!!!!

Thank you so very much for those wonderful comments, daggerwilldo! That encouragement means so very much to me! Your work is excellent and wonderful, too!

Thank you so very much! I appreciate the kind comment!

Thank you so very much!

A most wonderful and totally unexpected ending to this stellar story! Very well done, my friend! Totally fabulous to the max!

Thank you so very much for those kind reviews, Radar! It really makes my day to read!

Thank you so much! I appreciate you viewing and commenting!

A beautiful resolution to the story, and the artwork is so perfect! Well done!

Thank you so very much, Rod! I really appreciate the kind and supportive comments! That means a lot to me!

I'm so glad Savante Tas was finally able to remember the truth and connect with her son. It sounds like many things are headed in the direction of greater justice, but your last line makes me wonder what happens after "a while"! :-)

Thank you so very much, perpetualrevision! I appreciate it. I wanted to leave the ending a little bit open, as a new chapter might be told sometime!