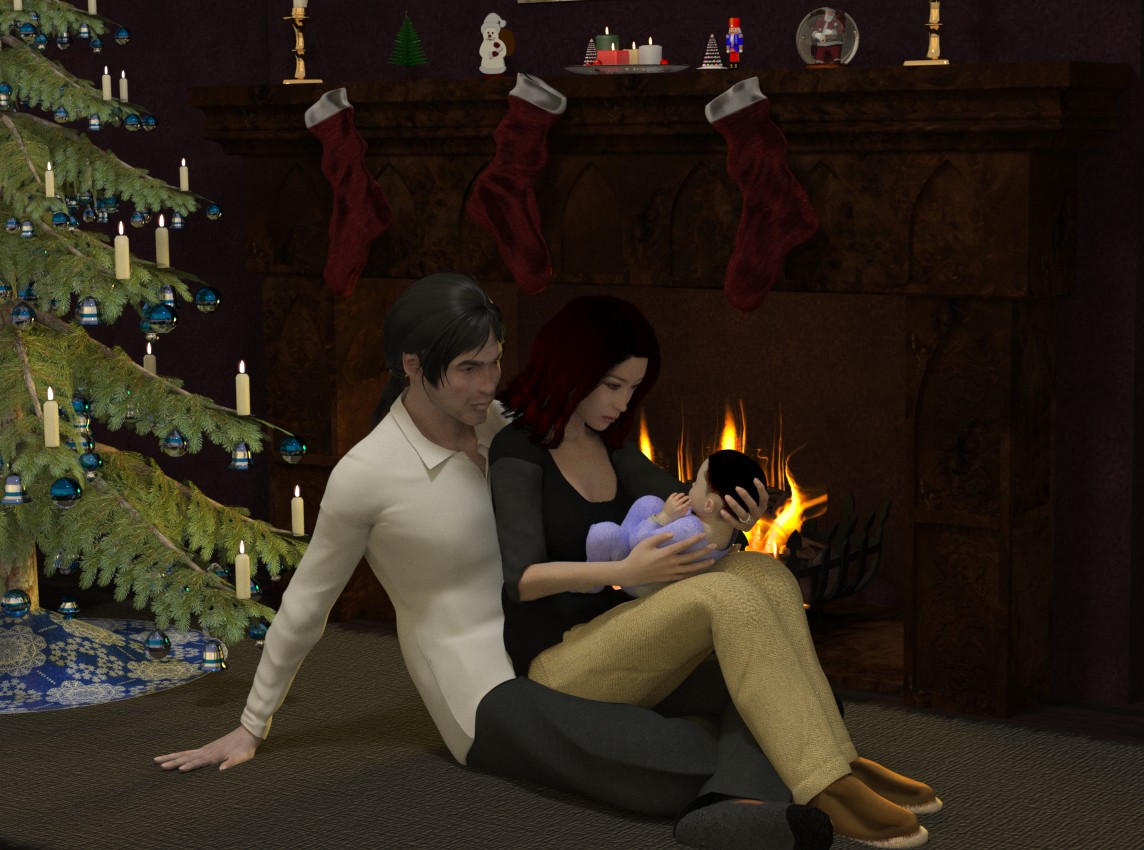 Nim shook his head. “Jo, he’s too little.” They were opening presents. Amelia and Curt had bought them each several gifts and Jo was trying to get Kory to rip off the paper. “I know.” Jo smiled. “I was just going to have him do a little.” “You’re not going to do Santa stuff, are you?” Jo covered Kory’s ears. “Shh, he’ll hear.” Nim laughed. “Like he’ll remember. Shades, even I don’t remember when I was two months old.” “I know. But it’s still fun. Ann and Andy do Santa with Cari.” “Cari is almost four.” “You have to start sometime.” “Just open the package. We slept late. The others will be here soon.” As if to emphasize his point, the doorbell rang. “Do you want me to get it?” Nim offered. He was the closest and the servants had the day off. Amelia nodded. “If you wouldn’t mind, please.” “Merry Christmas,” he said as he opened the door. “Merry Christmas to you too,” the woman said. “By your accent, I guess you’re Nim. I’m Susan.” Susan, it’s nice to finally have a face to the voice. Come in.” He stepped aside to let her in. “Thank you. Amelia and Curt have been inviting me for Christmas dinner since my husband passed away.” Nim started to follow her into the house when the doorbell rang again. He turned to answer. Susan paused in the door to the hall. This time, he got quite shocked. “John?” “Merry Christmas, Nim.” John smiled. “You remember Carry?” Nim was about to say he did when John waved him off. “Oh, wait, your memory, of course you do.” He turned to Carry. “He has a perfect memory. He never forgets anything.” “Really?” Nim nodded. “The first time we met, you were mad at John because you thought he was cheating on you when he canceled a date to help Ann’s grandfather. Ann was trying to convince you to give him a second chance. I was drawing in the same room. Do you want me to tell you the conversation?” “He could, word for word,” John assured her. She shook her head. “That’s okay. I trust you.” “What are you two doing here?” “We were invited for Christmas dinner.” “You know Jo’s parents?” John shook his head. “We’ve never met them.” “Jo called him a few times from the club,” Susan explained. “Amelia tracked him down. She wanted to invite a friend for you two.” Nim, I haven’t told Carry anymore about Torthoc yet or what I am, John sent telepathically. Still? I will soon. It’s just difficult. I’ve had to keep it a secret for so long. And she had some problems when her mother passed away. We could help, Nim offered. Please don’t. We won’t. And don’t worry. Amelia already told the family not to say anything. I don’t know what Susan knows, but there will be others here who don’t know. Dinner went well. Amelia made sure there was a friend for each. The only ones Nim knew were Melissa and Alan. After dinner, they sat near the Christmas tree. Amelia made hot cocoa while Curt lit a fire in the fireplace. Christmas music played softly and Jo curled up against him, holding Kory. This was the most at peace he’d felt on this world. Then John stood. “Carry, we met eight years ago today. You were having car trouble. I stopped to help you. You thought I was some crazy psychopath. I know you still think I’m crazy, but I hope that at least you no longer think that I’m a psychopath. I’d be worried about you staying with me if you did. But you have stayed, and I hope you’ll stay with me forever.” He got down on one knee and opened up a ring box. “Carry, will you be my wife?” She smiled. “Yes.” He kissed her and put the ring on her finger. Everybody congratulated them and drank a toast with the cocoa. You’d better tell her what you are, Nim sent. I will, just not in front of everyone. How did you tell Jo? I didn’t. Dae did. That name sounds familiar. She’s Ti’s mate. He has a mate now? Good. Jo curled back against him. The previous night at the church, they’d talked about a place called Heaven. Nim wondered if he was there.