37 - Arrival at the Darkstar Manor by MollyFootman 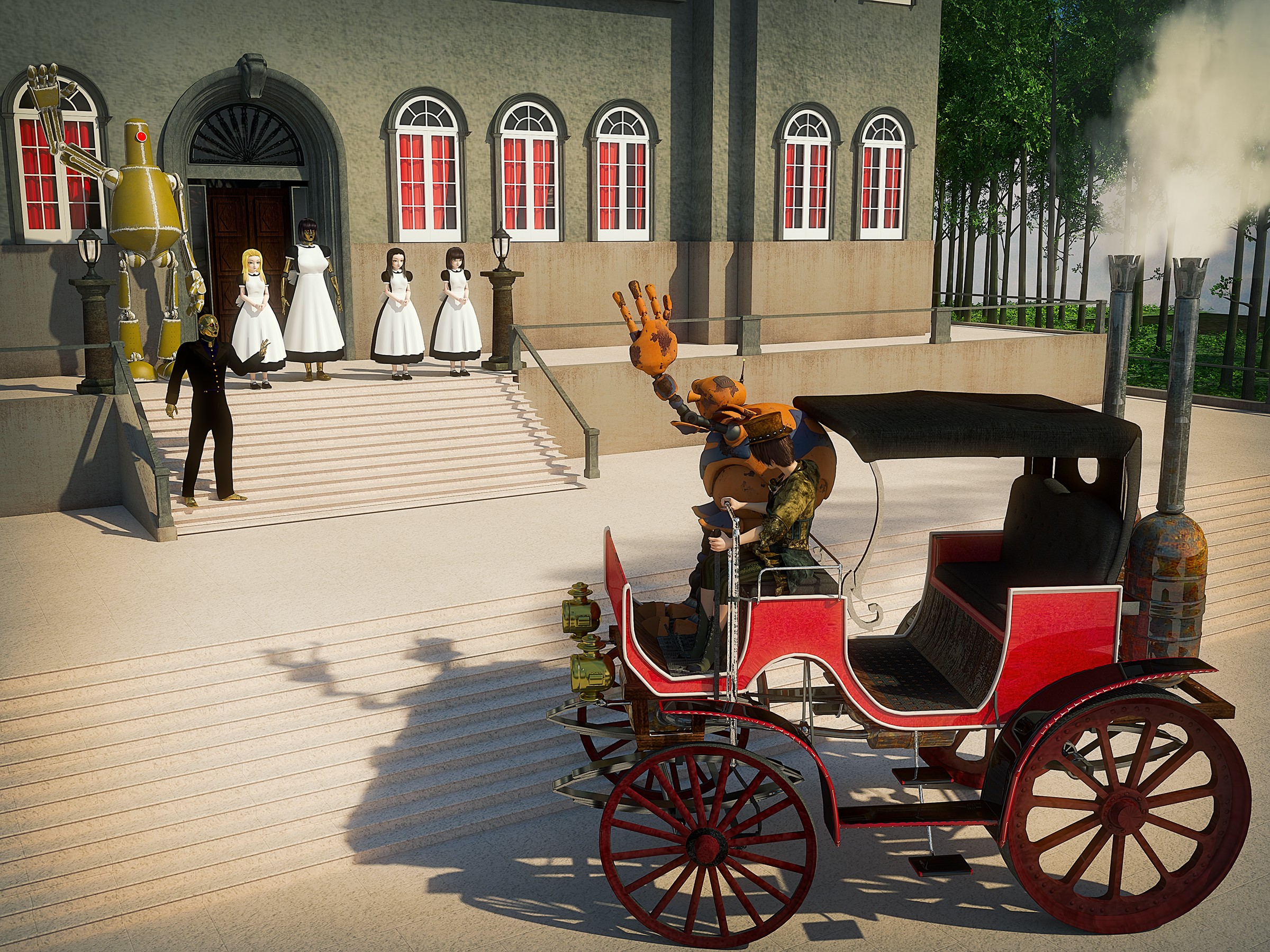 After a brisk ride beyond the city limits of New Babbage, Sonja braked the steam carriage at the front of the Darkstar estate. She noted the staff had gathered with the Guardian on the front steps. "Ehm! Best o' teh day ter yer all!" Fat Bob cheerily waved. "Where be 'er ladyship? Be she ready ter finish 'er tour o' teh manufactories?" As he returned the wave, the clank butler called back, "About that: I'm afraid there's been something of a development regarding Mistress Darkstar!" Sonja engaged the hand brake, listening to this exchange. As she observed the manor staff her eyes narrowed. "There's something wrong with the head maid!" she muttered. Molly's art notes: Set up and rendered with Poser 12.0.1029 and tweaked a bit in Photoshop. Fat Bob is by Simon-3D, Sonja Steelsinger is based on La Femme with modifications by Afrodite-Ohki. The butler and head maid are based on the CSI dummy figure by Cybertenko; the maid dolls are based on the BJ Doll by Studio Maya. The Steam carriage is by ADH3D. The setting is by RPublishing and Flink. The smoke is a prop taken from one of Michael C's products.

Fat Bob the Robot
By Simon-3D

SteamPunk Robots - The Guardian
By jonnte

CSI - The Mannequin
By Cybertenko

Caio Hair for La Femme and more
By Afrodite-Ohki

Debora for La Femme
By Afrodite-Ohki

Great looking scene and looking forward to seeing what happens next.

Heh. Thanks, Joe. Fat Bob may indeed be a distant relative of the CabinBot as Clanks are definitely the ancestors of 'bots! XD

Magnificent image, Molly! Love all the fine details! Especially like having the steampunk robots working it! Very well staged and delivered!

Thanks, Rad. I've always loved Steampunk and the Darkstar story is my most sustained attempt at Steampunk story-telling up to this point. The Clanks are a lot of fun, aren't they? =)

Thanks, Marius. Steampunk is a fun genre to work in, for sure!

Thank you, Mazzam. I wasn't entirely pleased with the sunlight which I thought looked better in the previous scene but there comes a time to shrug, render and post. ;-P I always enjoy hearing from you! =)

Quite the interesting group of staff here... And a great image, Molly! Fun story.

I had fun making them up and introducing them in previous picrtures in the series and enjoy returning them. =)

This is a great graphic (new interpretation of Alice in Wonderland), just the way I like it, have a nice Sunday and a good start into the coming week!

Thank you for the comment, Ute. How interesting that the picture reminded you of "Alice in Wonderland". =)

Hmm, wonder what Sonja sees as "wrong" with the head maid? Is it that she's a clank of a similar kind to the butler or that she's not clasping her hands? or something else? Fat Bob looks so friendly waving his giant hand!! :-) (And the Guardian looks pretty friendly too, waving back!)

Thanks, Amy. Sonja is a spark and can "see" that there's no aetheric fluid movement in the head maid because of the clankseed that compelled her to serve the air pirates before they cancelled her. Mechanics only see the surface of clanks (sometimes the mechanics are called "clankertons") but a spark can see deeply into clanks and their animating aetheric flows in a mystic way. I've hinted at all this but hated to be too explicit. Where's the fun in that? XD

I imagine Fat Bob and the Guardian to be friends as they are among the oldest of the original clanks fabricated by Ebeneezer Darkstar, Lilja's missing uncle and former "Guvner" of Darkstar holdings. In fact, Fat Bob was Ebeneezer's first clank creation. I had the butler waving as well, but tried to make him look more restrained; quite proper, you know, unlike commoners like Bob and the Guardian. ;-P

Thank you! I am so pleased that you are enjoying this series.

Dear Molly, I think they substituted the head maid by a robot?

The head maid, like the butler has always been a clank. The entire household staff is mechanical. You can review that here: https://www.renderosity.com/gallery/items/3012896/20-meeting-the-staff-of-darkstar-manor You have sharp eyes, Anne! =)