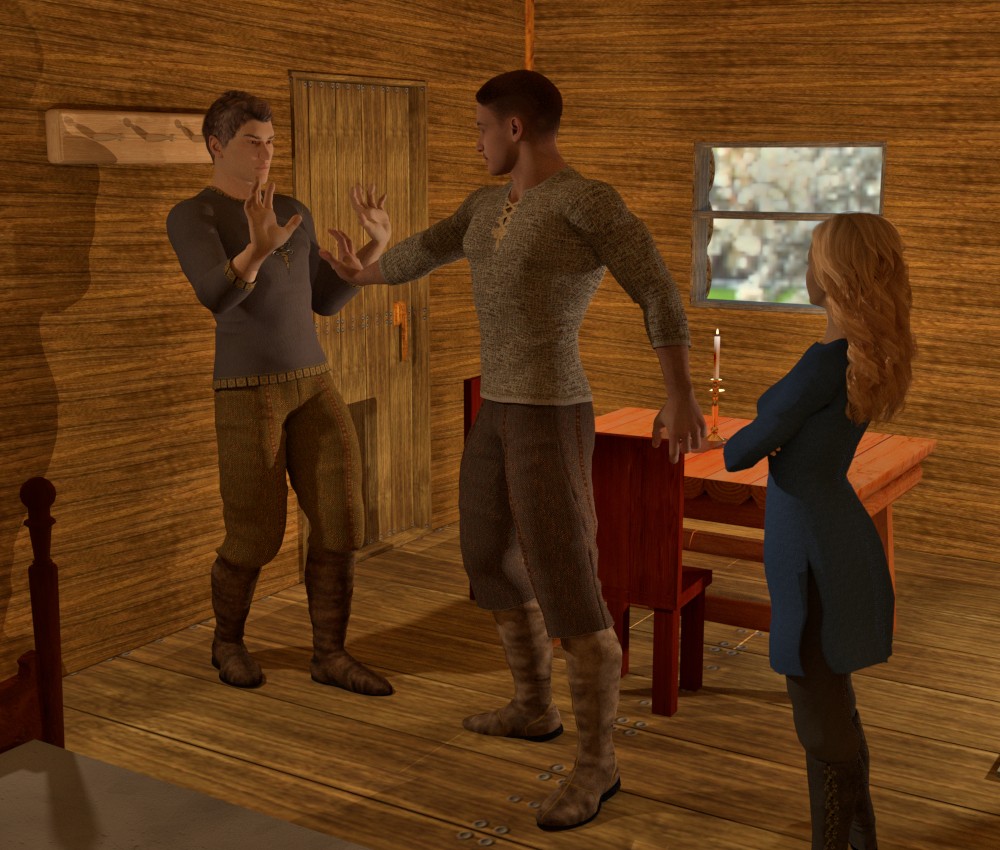 “Now, watch it closely,” Remtani instructed, looking over Jaidu’s shoulder. The words were for him as much as for her. He was teaching her to cook. Her closeness was a distraction. The last few days had been nice. The peace was needed after the chaos of the palace. He toyed with staying a few more days than originally planned. He could go hunting for more food, or they could go to Illia to do some shopping. That would be risky if he was recognized. So far, none of their neighbors had recognized him, so they were left in peace. They’d scry home and see about staying. “Like this?” Jaidu asked, showing him the food. “Looks perfect. Now, it needs to cool some,” he explained. There was a knock at the door. He went to answer it while Jaidu took the food from the stove. “Hi, I saw the smoke from the chimney and thought I’d stop by. There hasn’t been anyone living here in ages. My name is Lial.” Remtani was surprised that he was a half-elf but brushed it off. The assassins weren’t supposed to be working in Menthanla. “I’m Rem, and this is my wife Jai,” Remtani introduced them. “I will admit, I’m curious. This place hasn’t been used in ages. How did you get past the protection spells?” “My brother owns the place,” Jaidu explained. “He removed them for us.” “Your brother? Your Retin’s sister?” “I am,” Jaidu nodded. Retin was one of the aliases Thailyn had admitted to using. “Really? That’s strange. You don’t look eight hundred years old. Nor do you look dead. Retin’s sister died years ago.” Jaidu frowned. “One of his sisters did. But it wasn’t me.” “I was partners with him for years. He never mentioned a second sister.” “We only met five years ago.” “And his dad died five hundred years ago.” “Obviously, you haven’t spoken to him recently. If you had, you’d know his dad turned up seven years ago. But we don’t share the same dad, only the same mom.” Lial reached out for Jaidu, but Remtani stepped in front of her. Lial recoiled at the touch. He must be a healer. Most reacted that way when they read his injuries. “I think you should leave,” he told the half-elf. “I was just watching out for a friend. How’s he doing? I haven’t spoken to him for a while. I didn’t even know he was back in the kingdom.” “He’s fine. He’s living in Sen-gan now.” “Good. I wasn’t sure how his heart would hold out.” “His heart is fine,” Remtani assured him. Lial laughed. “Are you sure we’re talking about the same person?” “We have good healers in Sen-gan. He’s fine.” “Tell him I said ‘hi’. I’ve other villages I need to visit,” Lial said. “We will. Nice meeting you,” Jaidu called as he left. “Is it me or did something seem off with him?” Remtani asked. “You mean besides that being half elf?” “Yeah, his coloring was off. It didn’t match any of the clans. I’ve never seen one with red and yellow eyes.” “Maybe it’s caused by being a half-elf.” “That’s another thing. How did the assassins miss him? One of my soldiers looks slightly elven and he’s had assassins come after him so many times, Dad threatened to slaughter all the elves at the college if he was killed.” “We’re on the edge of the mountains. Maybe he lived hiding in the Baj-tisk for a while.” “Maybe. I don’t trust him.” “We’re leaving in a few days. We’ll never see him again.” Remtani nodded. “I guess.” “If it makes you feel better, I’ll shield the cabin tonight.” “You think you can keep a shield going?” Remtani grinned. “I can try.”

Fantastically written tense and dramatic scene! Great posing and lighting in your render!

Oh yeah, a bit of tension here. He's up to no good.