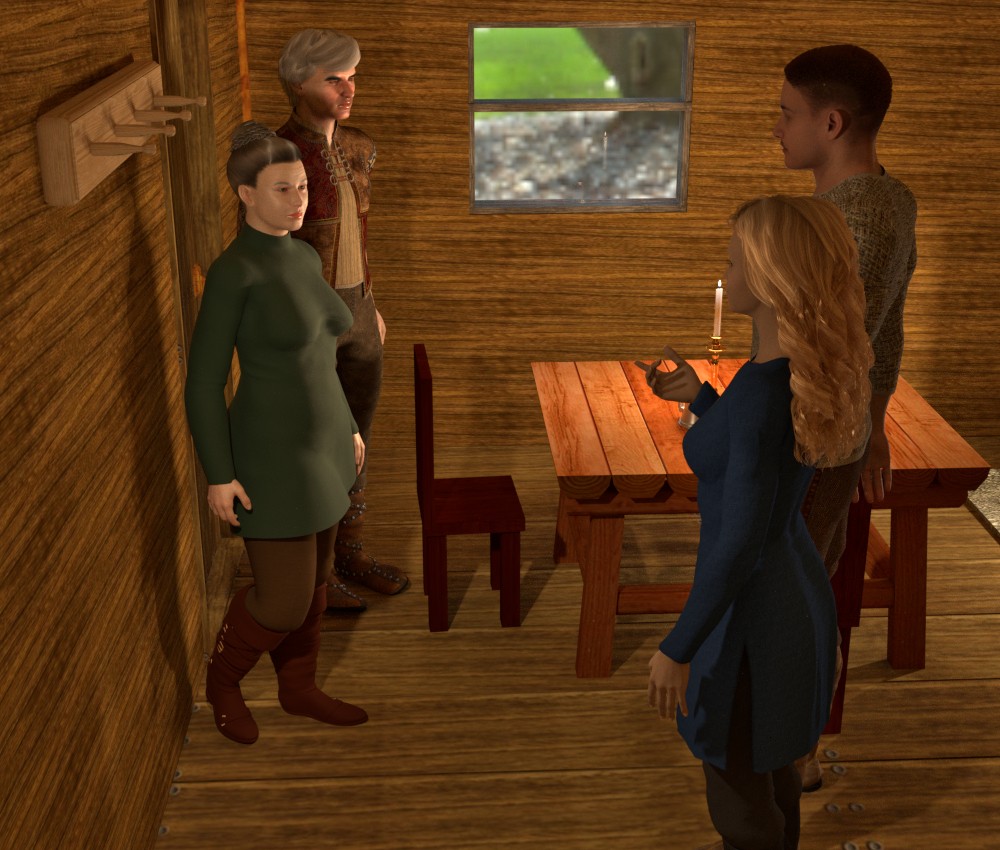 Remtani woke. Jaidu was up and by the smell, she’d made coffee for him. She, like the rest of the dragons, couldn’t drink it. He rolled to look at her and hide his back from view. She’d seen the scars, but he still tried to keep them hidden. She smiled. “Good morning.” Was it still morning? They had stayed up quite late. He turned to look out the window. She came and sat on the bed, handing him his coffee. He smiled and took a sip. It wasn’t bad, better than what was in the barracks. She wore a simple tunic and leggings. He was a little disappointed to see she was dressed. “You didn’t want me to get the firewood and water naked, did you?” She asked, knowing his feelings. “I suppose not.” “Besides, you need your cream. Lay on your stomach.” He complied reluctantly. She started to massage the potion into his back. He’d suffered so much damage to it with his beatings while in prison and when he was attacked, he’d lost feeling in his back. Since he couldn’t see it to know if he had any injuries, the potion was to protect it and prevent infections. They couldn’t do emergency healing to repair it because of the severity of the damage. The healing would cause so much pain that it would kill him. Thailyn and Shunati were looking into ways he might be healed, but he wasn’t optimistic. It was a good reminder of what he’d once been, what he would always work to avoid becoming again. “You’re too good to me,” he told her. “You were good to me last night.” “Trust me, last night went both ways.” “You’ve been patient with me as I learned.” He rolled to look at her. “Again, that went both ways. I love you so much.” He pulled her to him for a kiss. There was a knock at the door. Remtani sighed and Jaidu hopped up to answer it. “Sweetie, let me get dressed first.” “Sorry.” He quickly slipped on some trousers and a shirt. Then Jaidu opened the door. An older couple stood there. “Good morning,” the woman greeted them. “Good morning. Come in,” Remtani said. Jaidu stepped aside and they entered. “We just wanted to welcome you and your daughter to the area,” the woman said. Remtani frowned. How long would that happen? He hated the age difference. Jaidu on the other hand didn’t care. “He’s not my dad.” She smiled. “He’s my husband.” The woman turned red. “I’m sorry.” “It’s the height difference.” Remtani played it off. He was very tall and Jaidu was on the shorter side, not as bad as Ann or Jo, but still tiny compared to him. The woman nodded. “It must be it.” “So you bought this place?” The man asked. “No, we’re just staying a few days. We were just married yesterday. I’m a soldier and if we stayed at the barracks, the soldiers would harass us to no end.” The man frowned. “All that cleaning just for a little privacy?” “Hush, Olek, it’s sweet,” the woman said. “I’m Marish and this is Olek. Congratulations.” “Thank you. I’m Rem and this is Jai.” Both were common nicknames. Many in the kingdom had been named after him and there were half a dozen names that Jai could be short for. “My brother owns the place and I think he’s planning on selling it. That’s why they were cleaning it,” Jaidu explained. “He just said we could use it to get away for a little while.” “Your brother owns it? This place has been empty for years,” Marish said. Jaidu nodded. “A hundred, I think.” “He’s a dragon,” Olek told his wife. “Oh, that explains why you two look so different in age.” Marish smiled. “She’s a dragon, and he’s human. I should’ve realized. There are a few human dragon couples here along the Baj-tisk.” “Marish, why don’t we let this nice couple enjoy their first day of marriage and not be like those soldiers,” Olek suggested. “It was nice to meet you.” The man took his wife’s arm and led her away before she could protest. “Nice meeting you,” she called over her shoulder. “Don’t,” Jaidu said, pulling Remtani close. “What?” He asked although he could guess. “Don’t let what she said about our ages bother you. “But…” “But nothing. You’re not even old enough to be my dad.” “I’m sixteen years older than you. It’s on the young side, but it could happen.” “Pt’this is almost eight hundred years older than Sapphire. Nim is over twelve hundred years older than Jo.” “That’s different.” “Why? They’re dragons and I’m a dragon.” “I know but…” “Should we have waited?” “No. I love you and I want to be your husband. I’m glad we’re married. I just wonder what kind of trouble others will give us.” “You’re the crown prince. Most people will keep their mouths shut. We’ll ignore the others. I’m still aging. You got that charm to stop yours and now that we’re married, we can use the spell and make it permanent. Soon we’ll look like we’re the same age.” “I know.” “There will always be people who will find something to frown about. They like to gossip and look down on others to make themselves look better.” Remtani nodded. “You’re right.” He kissed her.

Can I get a spell to stop aging? Fantastic addition to the saga.

Another excellent installment. I agree with Remtani... I'm disappointed she was dressed too! I have a feeling they'll be facing greater challenges than just their age difference, and we still don't know who sent the assassins.

Great job on the characters render and scene!