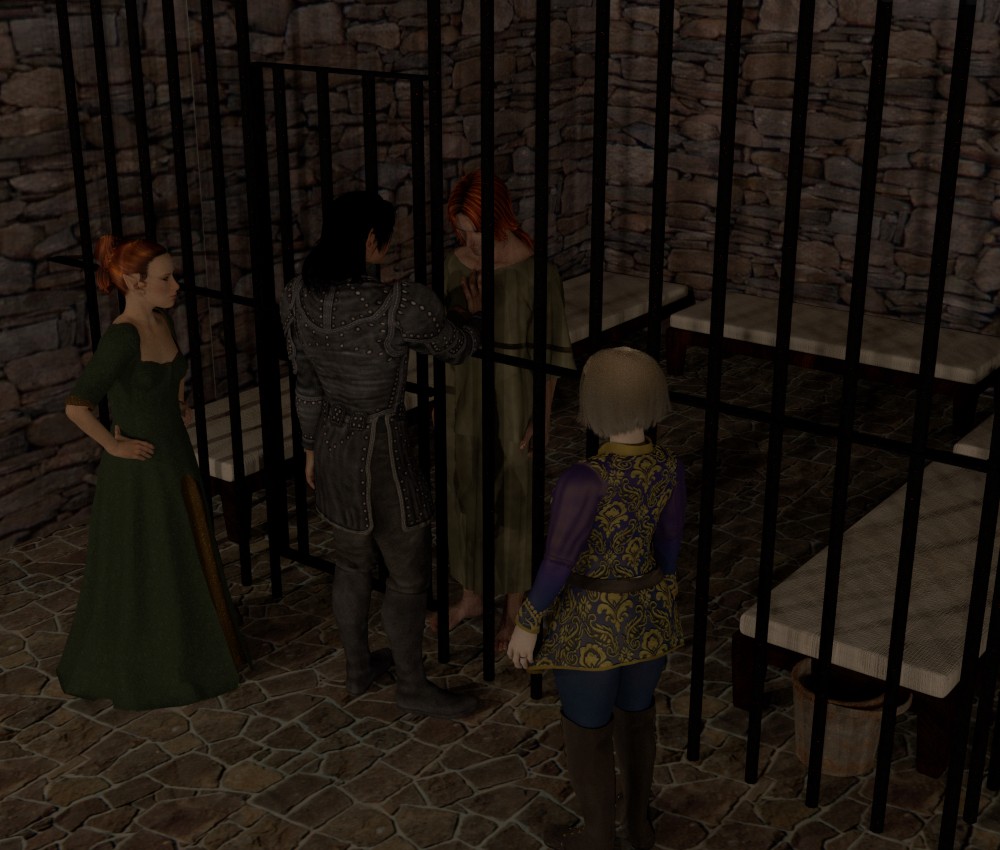 Ann sat eating her breakfast in her usual seat in the main dining room. It overlooked the garden. She enjoyed the view and found it relaxed her. “Princess, would it be alright if we spoke while you ate?” Deyama asked. Ann gestured to an empty chair. “You can eat with me too if you’d like.” Deyama sat. “Thanks, but I already did. If I don’t eat early, my stomach is off all day.” Ann nodded. “Cari gave me stomach problems too. I’m waiting for when she starts trying to stop my heart.” “Cari’s a good kid, bright too. I don’t see her causing problems.” “She follows Ruzi and Vaila into the trees. Soon she’s going to want to jump between them. What did you need?” “I looked into Mins. He’s missing, but the night of the attack, he was supposedly with Bolla, another assassin. I think you met Bolla when you were up in Erilu for Shun’s wedding.” “Yes, I did. He didn’t strike me as the type to work without permission or support someone else doing it. And I believe he supports you fully.” “Your ability to read people has always amazed me. Five minutes in a room with someone and a dragon becomes family. You know their life story.” Ann smiled. “Not quite. But I can usually get a feel for them.” “But, I believe Bolla when he said Mins was with him.” “Maybe it wasn’t Mins. I don’t have a perfect memory. Maybe the image I created wasn’t accurate. It’s possible it’s another elf that looks similar to Mins and my image was off just enough to make it look like him. Twins are more common among elves. Does he have a brother?” “Not one that would be mistaken for him.” “Would you like me to take you to see him? Shunati can join us and make sure he’s who he says he is.” Deyama thought for a moment. “Would another healer be allowed? I know of one who’s read Mins before and while he won’t admit it, I think he’s better at reading people than Shun.” Ann nodded. “Whoever you think is best. We’ve spent more than five minutes together. I’ve never seen a reason not to trust you.” “We’re allies. And you’re friends with my husband and have been for years. I’ve never seen a reason to be deceptive.” “Why don’t you scry him while I finish eating? Then we can go down.” “He’s just upstairs. He was one of my guards last night.” “Well then, I better hurry.” She finished her meal quickly while Deyama sent a page for the healer. It wasn’t long before another elf approached. He bowed. “Princess.” “Jerta, it’s good to see you again.” “You know each other?” Deyama asked. “He’s been here a few times. He’s friends with Sapphire. He was at Kith’s funeral.” “You remember that?” Jerta asked. “Not you being there. The others told me.” “How’s my cousin?” “Trying to stay strong.” “When I can, I’ll come to see him. Maybe I can find something Thailyn can’t.” “You mean Ruzi?” Deyama asked. “If he’s really Pisha’s son, he’s my cousin,” Jerta reminded her. “Is he?” “I don’t know. I’ve never read him. The few times I’ve visited, I’ve kept my distance.” “Let’s go check that assassin,” Deyama suggested. Ann led them down to the prison. One of the guards let them into the cell. Jerta approached Mins. “Brother.” Mins didn’t say a word. “The princess tells me you tried to kill a couple of people. Who told you to do that?” Mins still didn’t say anything. “If you went rogue, they’re going to kill you. Are you going to die for that round-ears?” He pointed to Deyama. Mins didn’t even look at her. “Brother, I’ll stall them, but please cooperate.” Jerta laid a hand on his chest. He turned and left. Ann and Deyama followed. The guard locked the door. Once they were back up in the palace, Jerta turned. “Is there someplace we can talk?” Ann led them to a shielded room. “What is it?” “That’s not Mins.” “What are you talking about? It is. He lived near Vor when we were little,” Deyama insisted. “It looks like him, but it’s not. He hates me. He wouldn’t have let me call him brother. He also wouldn’t have let me call you a round-ears.” “I am one. And he knows it.” “Yeah, but like you said, he knew you when you were little. He likes you and supports you. He insists we show you respect.” “So he’s another elf that looks like Mins?” Deyama asked. “Are they related? Something similar to Vor and Shun?” “No. He’s not even an elf. He’s had surgery to look like an elf.” “So what is he?” “I’m not sure. He reads a bit like an immortal, but he’s not. He doesn’t have any magic. He’s not anything I’ve ever encountered. And I’ve read a lot of people.” Ann raises an eyebrow. “How can he not have magic? He was casting. Are you sure the copper in the prison wasn’t interfering with detecting it?” “I can read it. Have one of the Augmenters check his personal belongings for charms.” Ann nodded. “Thank you for your help.” Jerta nodded. “Yes, ma’am.” “Princess, this man tried to discredit us and who knows what happened to the real Mins. If you need us, we’d be willing to be of continued assistance,” Deyama offered. Ann nodded. “I understand, and if we need your help, we’ll let you know. We’ll also keep you apprised of what’s happening. If our places were reversed, it would be what I’d want.” Deyama smiled. “Thank you.”

Another major surprise! The assassin is something they've never seen before! I can't wait to see what happens next.

They've been seen before by some of those at the palace, but they aren't willing to admit to it.

Did that guy call me a round-ear. Sheesh. Excellent chapter and addition to the story.

round-ears is a derogatory term for elves that act like humans or spend a lot of time among them.