White Wyrms Chapter 16: It Wasn't Us by RedPhantom 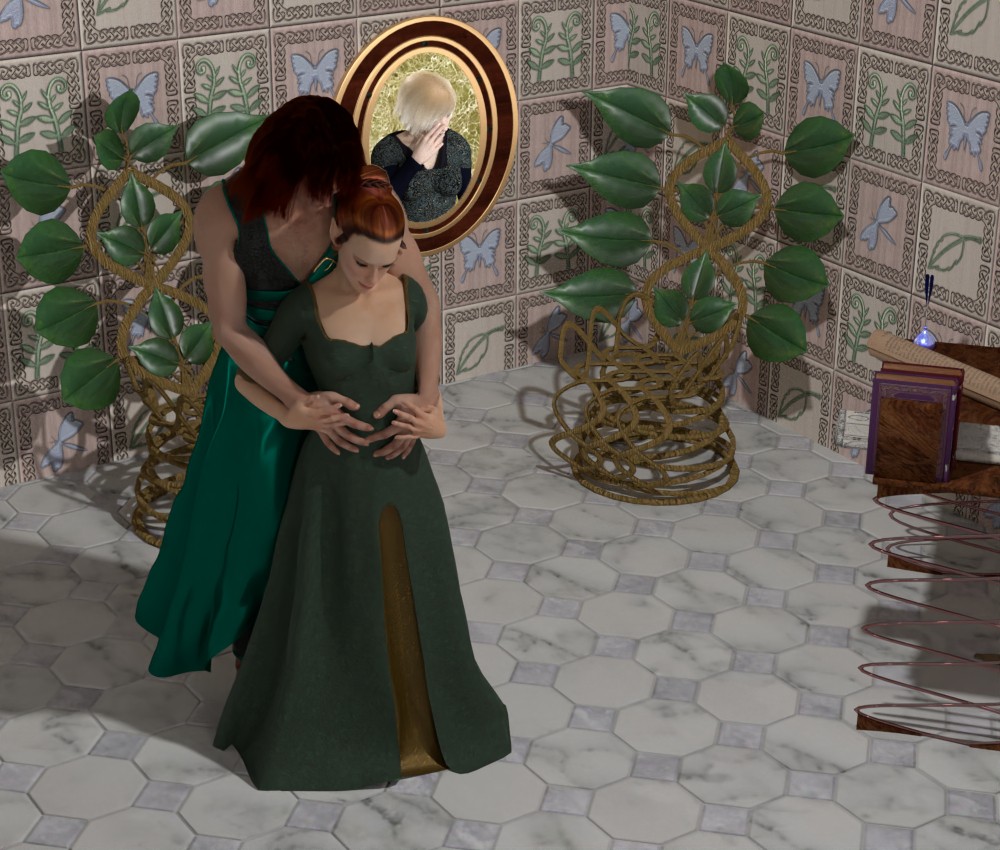 “How are you feeling?” Vor asked his wife. “I’m fine, A little nauseous,” Deyama told him. “Not bad.” “Should I contact Shun?” He offered. “No. I’m fine. He can’t keep transporting up here every time my stomach is a little off. He gave me some potions, and they’re helping.” “I just don’t want anything to happen this time,” Vor explained. Vor and Deyama’s marriage had been arranged by their parents when they were little and had fallen in love as they grew up. When Vor lost control of his magic, he had to go to the wizard’s college for help. Dreading their first extended time apart, they’d slept together the night before he’d left and Deyama had gotten pregnant and then had a miscarriage. She’d sent word of both, but Vor had never received the messages. His silence made Deyama think he didn’t care and it had nearly destroyed their relationship. Eventually, they worked it out and married. Now that she was expecting again, both Vor and Shunati were very protective of the child. Vor put his arms around her from behind and rubbed her belly. “I think you’re starting to show.” “Maybe a little,” Deyama agreed. “Queen Deyama?” Ann’s voice came. “Oh, excuse me. I didn’t mean to interrupt.” “Princess Ann, it’s okay.” Deyama pulled away from Vor. “What did you need?” “I was wondering why you sent an assassin after Shay and Jaidu.” “What are you talking about?” Deyama frowned. “Shay and Jaidu were attacked last night. It was an elf with an arrowhead brand on his arm.” “I didn’t send him, and neither did the elders. We have no reason to. Are they okay?” “They’re fine. I was with them acting as a bodyguard.” “Good. Who was this assassin? It’s illegal to impersonate one. It’s also illegal for one to work without permission. Both are punishable by death. And I intend to find and prosecute him.” “He hasn’t told us his name.” Deyama looked surprised. “You have him prisoner?” “He can’t be an assassin,” Vor claimed. “They’re impossible to capture.” “He has the brand. I don’t know who your assassins are. He looks like this.” Ann cast the spell to show what he looked like. “Isn’t that Mins?” Vor asked. Deyama frowned. “It is. He is one of our assassins. We’ll look into it on this end. Have Sinta talk with him. She used to be my aid and they know each other.” Ann nodded. “He was working with these two.” She showed them the other two attackers. Vor raised an eyebrow. “Humans? He was working with humans?” “Unless it’s a coincidence, two groups going after the same people.” Ann shrugged. “Thank you for coming to me and not assuming the worst,” Deyama said. “I’ve known you long enough to know an explanation is best before action is taken,” Ann said. “I’ll let you go and I’ll get to the bottom of this,” Deyama assured her. “My love, I need to talk with Ann privately for a moment. I’ll catch up with you,” Vor told his wife. She nodded. “See you soon.” He waited until she was gone before he continued. “Before I left for the wizard’s college, I was training to be an assassin. I only left because I couldn’t control my magic and needed help. I was able to stay in Thager for so long because I was stationed there. I never took my vows, so I’m not an assassin. I was there as a forerunner. Deyama knows all this. I’m telling you to explain how I know what I’m going to tell you next. “Sinta won’t be able to get information from him. Drepal will need to question him if you want any chance to find out anything. And she will have difficulty. Assassins are trained to die before giving away information. He’ll kill himself if he has to.” Ann nodded. She was afraid of that. “We’ve taken precautions to keep him alive.” “I figured you would.” “You wanted to talk to me privately. You didn’t tell Deyama who Drepal is,” Ann guessed. “No, I didn’t. Deyama would understand, but the elders wouldn’t and she would eventually need to tell them.” “Thank you for that. And I understand that you’ll need to tell her eventually.” “I’ll put it off as long as possible,” Vor promised. “Thanks.” “You need to go. I’ll see you at the wedding,” Vor told her. Ann nodded. “I’ll see you then.” She ended the spell.

Another excellent piece of the story. It's going to interesting to find out who wanted them dead and why.

True to life scenario, never got the message, so got the cold shoulder for something I didn't know. Now that's good writing when it relates to readers, well done.