White Wyrms Chapter 14: It's Not Good to See You by RedPhantom 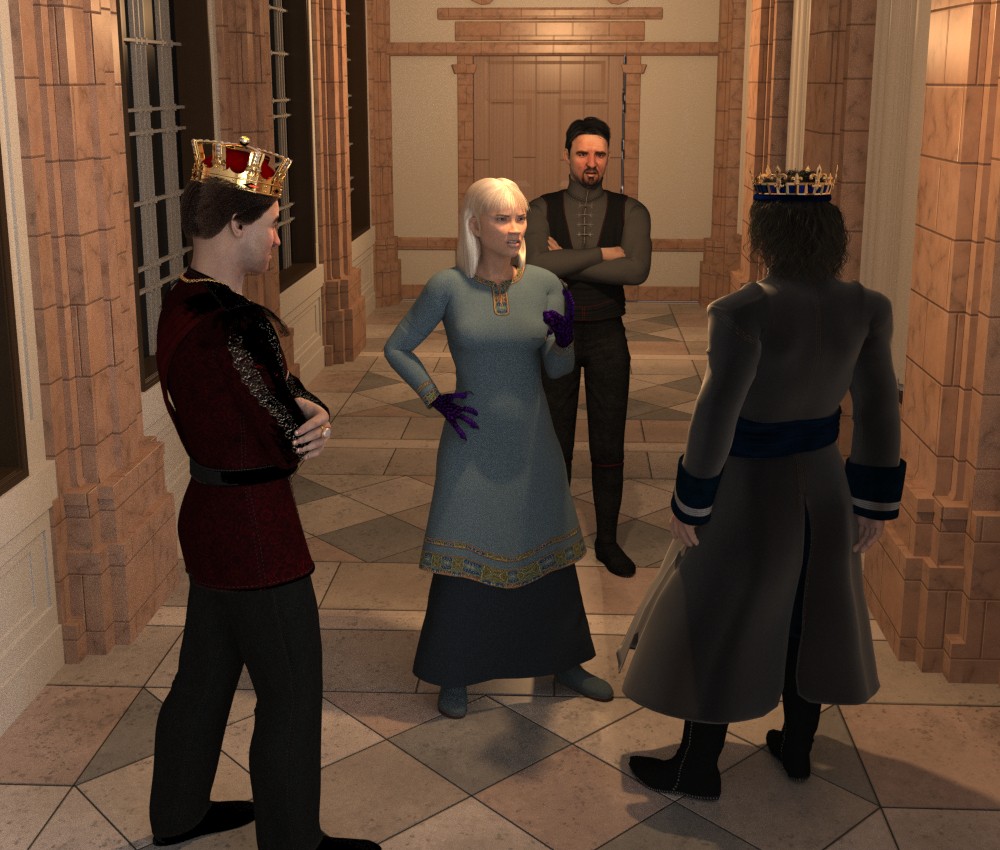 Author's note: Somehow, chapters 13 and 14 got marked as uploaded when they weren't so I'm posting both now and should be read before 15 (if you haven't read it yet) *** Shay watched Mishtali working with one of the dragonlings. She had been tutoring a boy who needed reading help. He was starting to get the hang of it. The better he did, the more excited he got that he was finally learning it. He had to be careful he didn’t get so excited he lost focus and made mistakes. The girl Mishtali was working with needed extra help controlling her magic. Her strength was impressive. Once she learned to control it, she’d be one of the better mages in Baj-tisk. Mishtali showed great patience with her, more than Shay had ever seen from him. They’d both changed in their time apart, molded into different people. It hadn’t changed their feelings for each other and they’d adapted. If anything, they were closer than ever. Mishtali looked up at her and smiled. She smiled back. It was so good to be together again. He curled up with her once he saw the girl off. “She seems to be making progress,” Shay said. He nodded. “She is. Her focus is improving.” “Good.” “Have you given any more thought about going to Tricon for a visit?” Shay nodded. “I’d like to see my brother and his family.” “If we go, we should ask Nim and Jo to join us. His dad was born there. He might have family there.” “It’s doubtful. All the Augmenters and their families came here.” “There were some who hid even back then. There’s a slim possibility.” “It won’t hurt to ask him.” “Now we just need to figure out how to get us all there. That will take the total up to nineteen.” “Eight can fly. Six are children. That’s only five adults.” “Thailyn can’t fly that far. His heart won’t take it. He almost didn’t make it when we first came here.” “We’ll figure something out. We’ll talk with the others after the wedding.” Mishtali growled. “Do you still object to them getting married?” “No. Remtani has shown he’s not what I first thought. It’s Kamlia I object to. If he so much as looks at you wrong, I will roast him.” “I’ll be fine. I’m not collared anymore. I can use my magic and I can take true form. And I’m not alone. You know our family will help watch out for me.” “And two are white wyrms. You’ll be good when you go back.” “I think I should go back early. This is Jaidu’s wedding. I should be there with her.” “I agree. There’s no reason you should be here hiding rather than helping her. We’ll go support her.” “We?” “If you think I’m going to leave you alone in the same city as that man, I’m having Thailyn check you for a head injury.” “But you have responsibilities here.” Mishtali growled. “I don’t care. I’m tired of letting others push me around. I have a family to take care of. That is not a weakness.” “That little girl needs you.” “So does my daughter. I’ll come back to work with her, but I’m going to be there for you and Jaidu.” Shay nodded. She believed she could handle any trouble Kamlia caused, but having her mate at her side would be welcome. She transported them to the palace. Hand in hand, they made their way to the throne room where the others would be greeting Kamlia. Emeton and Kamlia were just leaving as they approached. Emeton was gushing over Jaidu’s growth and intelligence. As a dragon brother, he already saw her as family. Kamlia was frowning with disapproval but smiled when he saw Shay. The greed in his eyes made her shiver. “Shay, it’s so good to see you.” Mishtali moved in front of her, but she slipped past him. Her hands became claws. “The feeling is not mutual. The only reason why you were invited is that you sired her. I won’t put up with you hurting her any longer. I have my magic again, and your advisor isn’t around for you to hide behind.” She pushed past him into the throne room to see her daughter. “If you touch my mate or our daughter, I will roast you. I don’t care if you’re a king or if it will start a war,” she heard Mishtali warn behind her. Jaidu smiled. “Mother, I’m glad you made it back.” Stay close to Mishtali, she added telepathically. Father’s up to something. Shay hugged her. I know. But I couldn’t stay away and leave you and Rem to deal with him alone. He can’t hurt me anymore unless he hurts you. He won’t. “I’m glad you two could come,” Remtani said. “This is a time to spend with parents. Come, there are a few things we could use your opinion for.”

Excellent writing and continuation of the story. Lots of drama.

Excellent story chapters... I thought things jumped around a little until I saw these chapter. Now it all makes sense. I still think Kamlia is going to be doing some serious squirming when Ann and the others show up at his door really pissed off.

Great expression and lighting! A lot of drama!