White Wyrms Chapter 2: What isn't it? by RedPhantom 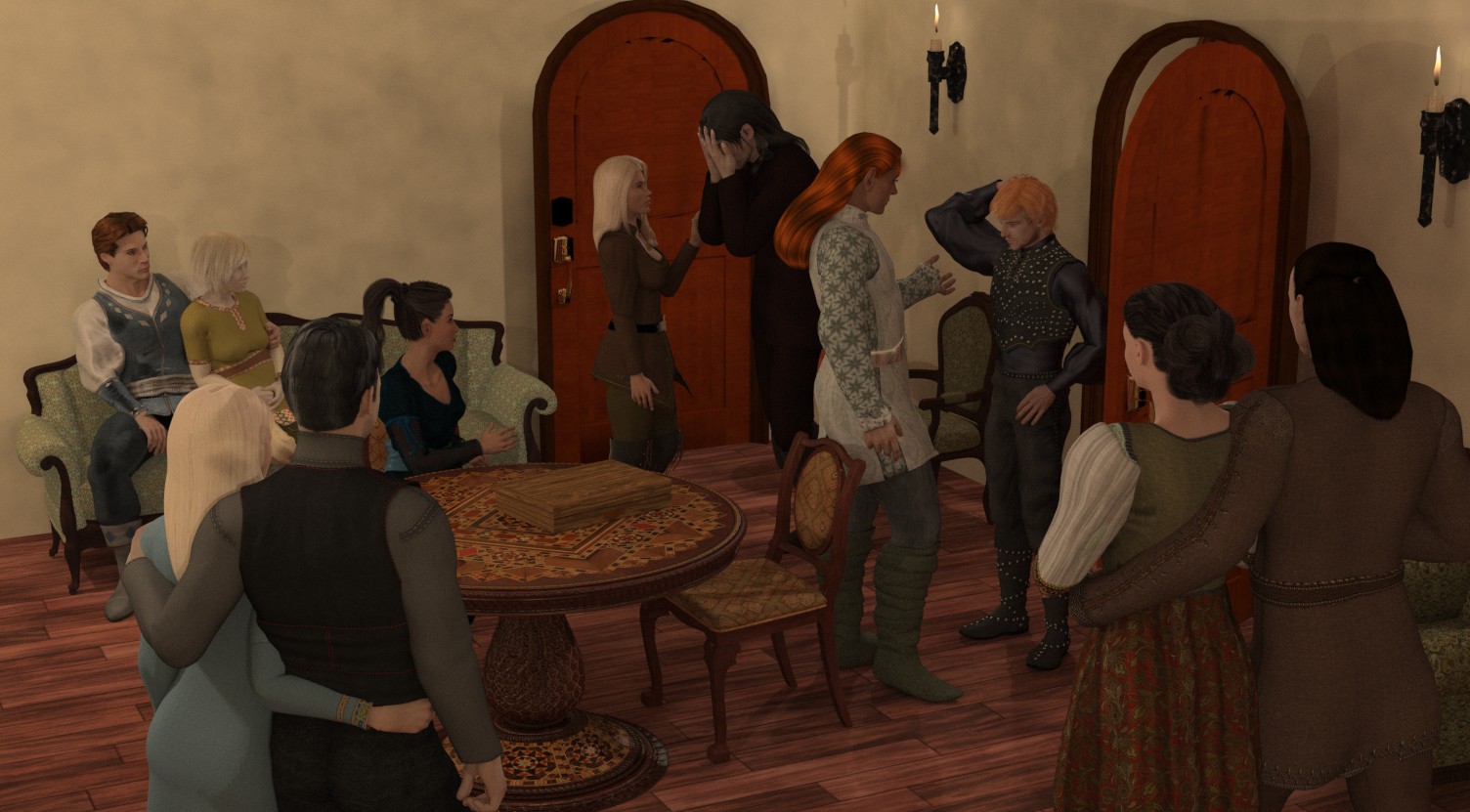 “Drink it,” Pt’this growled and thrust the glass at Nim. “No. I’m not blocking the bond,” Nim insisted. No dragon willingly blocked the bond he shared with his mate. Nim was even more reluctant than most due to having to block it for a month while he recovered from surgery shortly after mating with Jo. “Nim, the pain gets intense,” Pt’this argued. He, like most dragon fathers, had ended up needing the block for the births of his children. After three times of labor, one with twins, he no longer argued. Nim doubled over in pain as Jo had the next contraction. He still shook his head. “Nim, take it,” Andy insisted. He too had been reluctant to take the block but had given in before his daughter had been born. “I’ve dealt with pain before. I can’t deal with not feeling Jo.” “We’ve all dealt with pain. Look at what I went through with Mirimar. This is different,” Pt’this said. “Nim, please, take it for me,” Joanne pleaded. “It will make it easier for me to know you aren’t suffering too.” Nim hesitated. “Take half of it,” Thailyn suggested. “It will dull the pain, but you’ll feel her. This way, she won’t feel your anxiety and it will prevent feedback pain. You don’t want to compound Jo’s discomfort by making her feel the pain coming from you too, do you?” Nim sighed and nodded. No dragon would let his mate suffer for his own benefit. He drank half the glass. “Now, you two, out,” Thailyn told Pt’this and Andy. “Go wait in the other room.” Thailyn and his apprentice Lamdi would be delivering the baby while Nim was there to support Jo. Andy and Pt’this joined the others in the observation room. Today, the curtain was closed for privacy. Ann and Sapphire, their respective wives were already there along with Mishtali and his mate, Shay. They were joined shortly by Nim’s mentor, Chapado, and her sister, Morina. “Did he take the block?” Ann asked. “Half of it. We left the rest,” Pt’this said as he sat with Sapphire. “Stubborn old goat,” Mishtali grumbled. Shay patted his knee. “Behave yourself, dear.” Mishtali nodded. Andy held Ann close. They could hear Jo in the other room and it was stirring up bad memories for Ann of when she’d been a prisoner of the trolls as a child. “Are you sure you want to be here?” Andy asked. Labor cries often upset her and there had been times she’d needed to leave the room. Ann nodded. “We’re the only family they have, here at least.” She pressed closer to Andy. Andy and Jo came from a different world called Earth. Jo had only recently reconciled with her estranged parents and the relationship was still strained. They rarely saw each other. Nim had no family. His parents had passed away centuries ago. His mother had been an only child and his father’s family had died almost five thousand years ago on an island called Tricon, the homeland of the dragons. “We could wait down the hall,” Andy suggested. “I’ll be fine,” Ann insisted. Shunati came in a short time later. “Can one of you telepaths let them know I brought some silver bane? It sounds like Jo needs it.” “She already took some,” Pt’this said. “She did?” Shunati was surprised. While he was the head palace healer, Thailyn was stronger and more knowledgeable. He should have everything under control, but it didn’t sound like it. “She took it a while ago before they sent us out here,” Andy added. “Can you ask if there’s a problem?” The elven healer requested. “She shouldn’t be in that kind of pain after taking that.” Pt’this shook his head. “Thailyn’s blocking me.” “What about Nim?” Shunati asked. “He is too,” Pt’this confirmed. “That doesn’t sound good. I’ll go in and check,” Shunati decided. He put on a robe to protect his clothes and began a spell to kill the germs. Before he finished though, Thailyn and Nim came out. It was clear by their faces something was wrong. “What is it?” Shunati asked. “What isn’t it?” Thailyn countered. “The baby hasn’t turned, the cord’s around the neck, and the child is too big to fit through Jo’s tiny hips.” “What can be done?” Mishtali asked. “I want to discuss options with Shun. Lamdi has the labor on hold. She can keep it that way for maybe two hours without problems.” “What about the cord?” Pt’this asked. “There’s no danger yet,” Thailyn assured them. Nim went and stood by the curtained window, leaning his forehead against it. Chapado drew him away and sat him at a table with parchment and a piece of charcoal. Nim started to draw. “Ann, I want you to go get Jo’s parents and bring them here, just in case,” Thailyn told his daughter. Upon hearing this, Nim started to get up. Chapado pushed him back down. He growled but continued drawing. Ann nodded. “Anything else?” Thailyn shook his head. Ann transported off. Thailyn turned to the others to brainstorm.

Poor Nim's got all kinds of problems; Drink it Nim... tastes like grape juice.

Excellent scene with so nice characters !