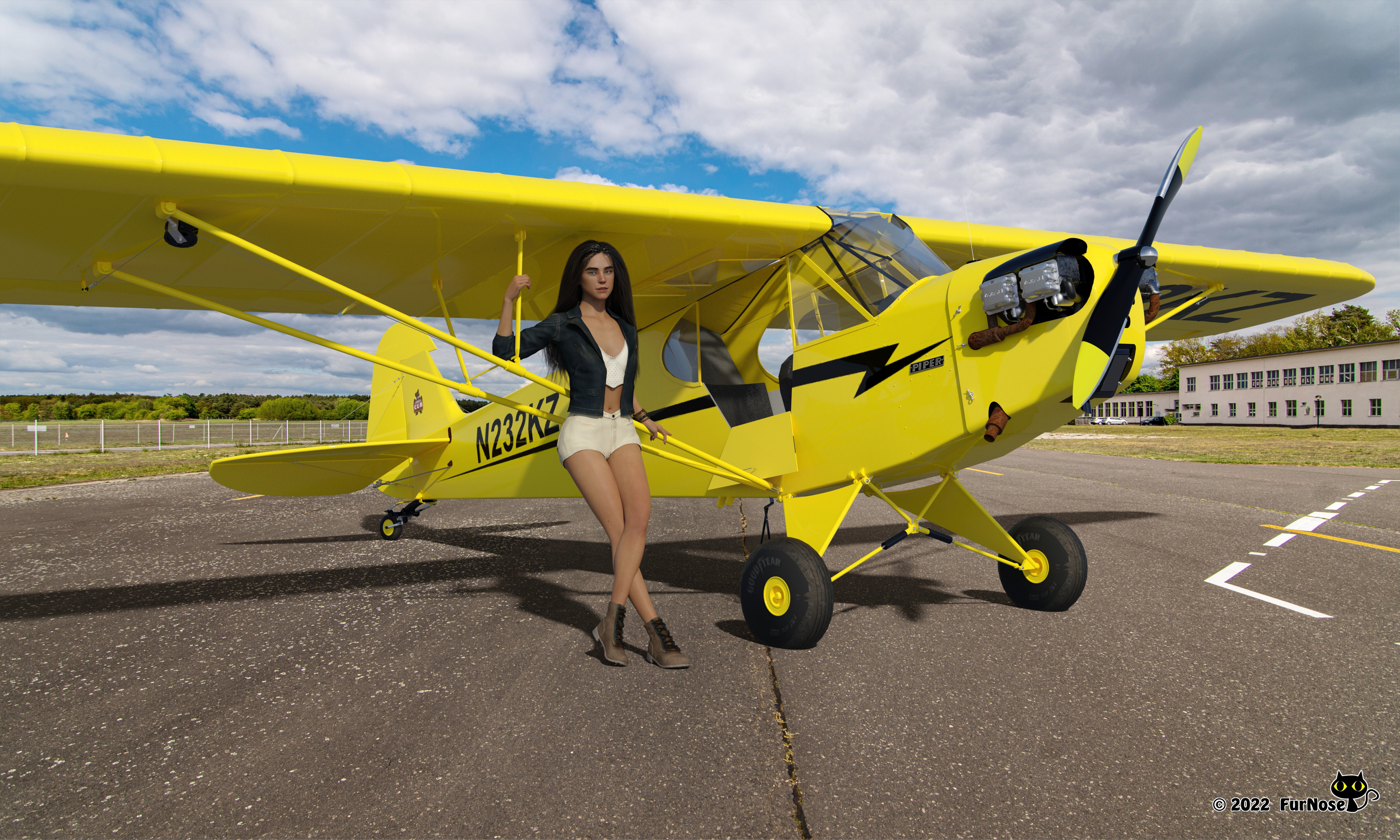 This time, I have no story (although there could be a pretty story behind that picture, I'm sure), but just a few renders of 3DClassics awesome Piper Cub coming up soon here on the Marketplace. The Product contains the Piper J-3 Cub and the military variant the Piper L-4 Grasshopper. There are Versions with Wheels, Skis and Floats and the L-4 has rocket launcher racks installed on the Wing struts. This product comes a bit in different flavor between the Poser and DAZ-Studio version. While the Poser Version comes in different Models for the different Versions, the DAZ-version utilizes some advanced DAZ-specific technologies and there is one single base model, which allows the combination of different options. This is due to the fact, that I had the phantastic opportunity to partner up with 3DClassics and while the Poser Version comes in the usual quality of 3DClassics Models, the DAZ-Version is revised by me and I put all my knowledge of rigging a model in DAZ into this package (so please don't be surprised, if you read "FurNose" anywhere in the DAZ-Version of this product). While I had the luck of being provided with an awesome base product from 3DClassics, I could concentrate on polishing the DAZ-Version a little up and bring in functions and techniques which are unique to DAZ-Studio. So in the DAZ-Version the Base model is the J-3 Cub with all three Options (Wheels, Skis, Floats) switchable (on/off) by three parameter switches. The L-4 specific differences to the J-3 are (mainly) the Canopy and the "spinner less" Prop. Both of them can be added to the J-3 Base model as a Geograft to convert the J-3 to the L-4 variant. The rocket launcher is a parented prop, that can be added as desired. Since I had to do some slight changes in the Mesh, which screwed up some of the UV-Maps and I had to redo some of them, the Texture Files of the DAZ-Version and the Poser Version are not fully compatible. Credits PIPER CUB BUNDLE for DAZ Studio by 3DClassics soon here in the store Echo HD for Genesis 8.1 Female by Mousso @ DAZ3D Classic Long Hair with dForce for Genesis 8 Female(s) by Linday @ DAZ3D Summers End Outfit for Genesis 8.1 Females by Arien @ DAZ3D Background picture by sinousxl @ Pixabay.com Render is pure IRAY-Render without post work (beside the Logo) Hope ya like it

I see that you have added a tire texture...Charmant pilot...

Yes, and with every time I launch DAZ-Studio and load the Piper I see something else I could improve or add... I really got to stop adding more and more stuff, or the Package will never be ready

Here I am! I'll fly with her any day!

This is also a very nicely done new image, just love it a lot!

I would enjoy going up with her. the open door would make taking aerials much easier. the last aerials that I was able to do were on a Southwest jet from San Jose, CA all the way to Texas had smoke and smog- not mentioning the windows being obscured by age/ abuse. I might try and go the museum in Addison, TX again and pay to go up when it is warmer