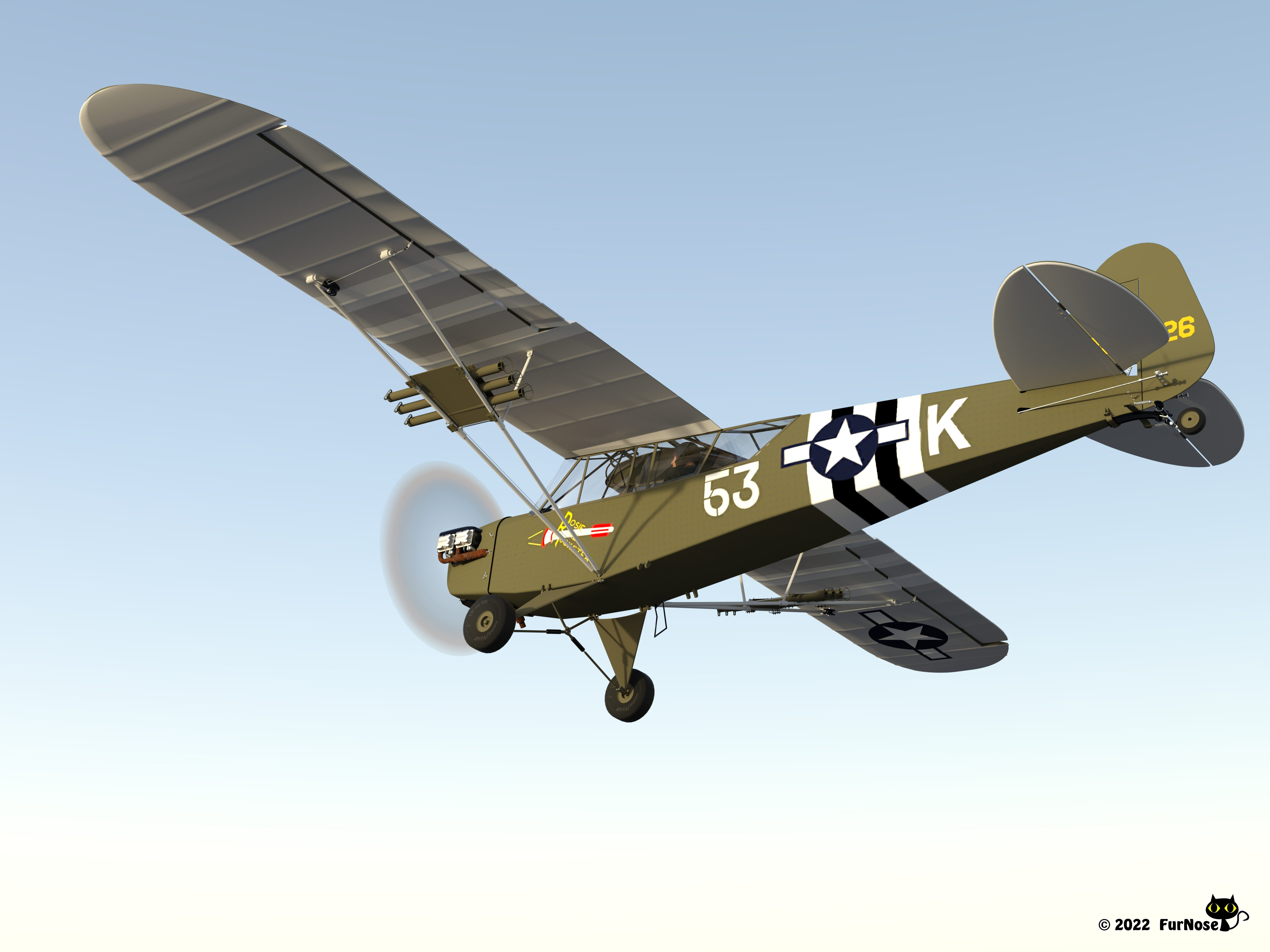 This time, I have no story (although there could be a pretty story behind that picture, I'm sure), but just a few renders of 3DClassics awesome Piper Cub coming up soon here on the Marketplace. The Product contains the Piper J-3 Cub and the military variant the Piper L-4 Grasshopper. There are Versions with Wheels, Skis and Floats and the L-4 has rocket launcher racks installed on the Wing struts. This product comes a bit in different flavor between the Poser and DAZ-Studio version. While the Poser Version comes in different Models for the different Versions, the DAZ-version utilizes some advanced DAZ-specific technologies and there is one single base model, which allows the combination of different options. This is due to the fact, that I had the phantastic opportunity to partner up with 3DClassics and while the Poser Version comes in the usual quality of 3DClassics Models, the DAZ-Version is revised by me and I put all my knowledge of rigging a model in DAZ into this package (so please don't be surprised, if you read "FurNose" anywhere in the DAZ-Version of this product). While I had the luck of being provided with an awesome base product from 3DClassics, I could concentrate on polishing the DAZ-Version a little up and bring in functions and techniques which are unique to DAZ-Studio. So in the DAZ-Version the Base model is the J-3 Cub with all three Options (Wheels, Skis, Floats) switchable (on/off) by three parameter switches. The L-4 specific differences to the J-3 are (mainly) the Canopy and the "spinner less" Prop. Both of them can be added to the J-3 Base model as a Geograft to convert the J-3 to the L-4 variant. The rocket launcher is a parented prop, that can be added as desired. Since I had to do some slight changes in the Mesh, which screwed up some of the UV-Maps and I had to redo some of them, the Texture Files of the DAZ-Version and the Poser Version are not fully compatible. Credits PIPER CUB BUNDLE for DAZ Studio by 3DClassics soon here in the store World War II U.S. Uniform HD for Genesis 8 Male(s) by Luthbel @ DAZ3D Vintage Aviator for Genesis 2 Male(s) by Dogz & Sarsa @ DAZ3D Render is pure IRAY-Render without post work (beside the Logo) Hope ya like it

!'ll buy it :) Good work Furnose - lots of possibilities for this little bird.

I wonder how the pilot could launch the rockets from his seat...Probably with a simple and practical fidding!

Well I suppose they where mostly two people in military use, but yes, I have no clue how they fired them. Hopefully they wouldn't have to open the door and ignite the Rockets with a few matches

Impressed...superb rendering...most appealing of the 3...but all are really good with out a doubt...!!..guessing as this is going to be in the marketplace at some point...you may want to re-revisit the UVs.. or decals for a little revision...unless of course the more authentic look is required...

OK! I write this here just as an information for all who come across this image and the texturing problem: I had a very intense research with Darkglass about the mentioned issue in the Image and we checked many things to solve it (many, many thanks again in this place for all your help and all your inputs! They where invaluable and played a major role to improve the quality of the product!!). The result of all research (as well in the DAZ-Forum) pointed to the compression of textures in the IRAY-Render engine. There are standard settings in the "Advanced"-Tab of the Render settings called "Medium Threshold" and "High Threshold". These control the Texture map size which will be compressed. So the Standard settings are 512 for Medium and 1024 for High. Setting this variables to a higher Value help get rid of over compressed Textures. In the Case of the DAZ-Version of the Piper Cub Bundle (and in particular the army-green L-4) a setting of 5000 for Medium and 10000 (e.g.) helped to get rid of those awful artifacts and the strange dotted Grid in the texture. I leave the "bad" render here just to illustrate the problem (open the full size render and you'll see what I mean)

Hope this helps one or the other with similar problems.

The military version looks great! I'll definitely be keeping my eyes peeled fr this one!