Packing It Up, Pt. 3 by MioraaNyte 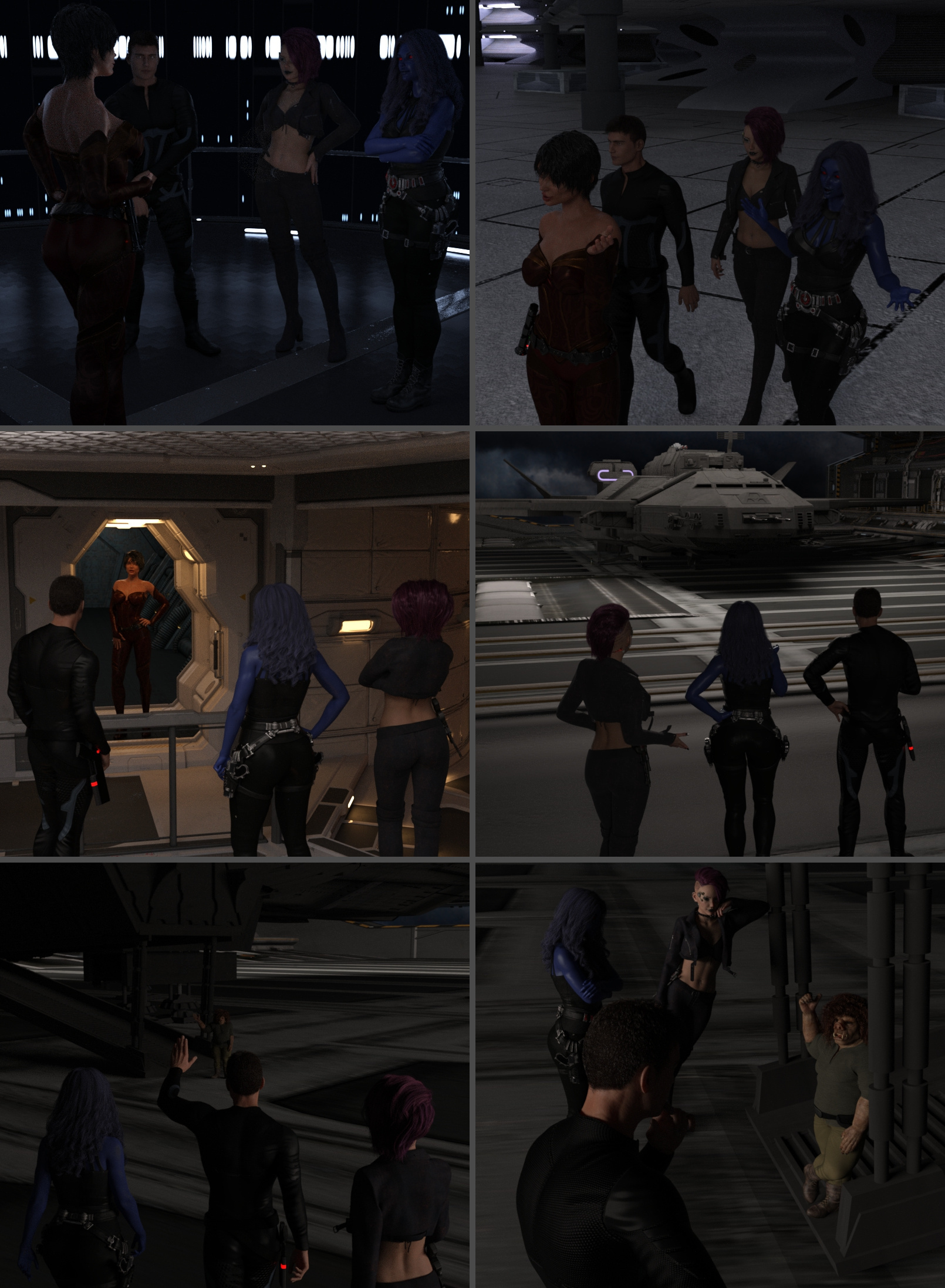 As the group descended on the elevator, Zefaara addressed the Chiss woman, "so Malorva, how's early retirement been treating you?"

"Truthfully, it stinks," the bounty hunter replied, "I mean, there's nothing to do.  You can only watch so many holovids before you know every line by heart."  Pausing as the elevator came to a stop, she went on, "but it's better than having to look over your shoulder every second for some punk kid wanting to take you out, so they can make a name for themselves."

Exiting the elevator, Malorva spoke again to the Sith, "the last time we worked together was almost two years ago, you were an apprentice to a lower ranking Darth then, a Darth Zash if I recall and we were on a first name basis.  You're a member of the Dark Council now, Darth Nox.  How in the universe did you manage that in such a short time and what do I call you now?"

"Ah, Malorva," Zefaara responded, "you know how it goes in Sith politics, irritate the right people, have them challenge you to an ancient ritual Sith ceremonial duel, kill them," adding with a small chuckle, "the usual."  Letting the Chiss digest what she said, the Dark Lord went on, "and while we're not strictly formal about hierarchy levels around here, the normal titles for those in my position everybody uses are 'My Lord, My Lady or Darth Nox'.  Any of those work for me."

"Well then, My Lord," Malorva replied, "the Twi'lek said you were looking for a pilot and sent her to find me, why?"

"To be brief my dear, you and Mako are the best ship's pilot and systems operations team I've ever seen, and this group's operations will require the best," Zefaara answered.  Upon entering a corridor junction, the Sith split off from the group and informed them, "I have to go into the city to meet another vital member of your crew.  Commander, if you would please escort your new crew members to check out the ship, I would appreciate it."

"Ok, My Lord, if we decide to take the job, we wear our own gear, no frakking uniforms,"  the Chis stated defiantly.

Responding with a slight laugh, Zefaara said, "Hunter... there's no if, the job is yours, that's not a debate.  You and Mako will be considered civilian contractors, you can dress as you please... within certain boundaries.  Look on the bright side, it'll get you out of the house more often."  Turning to leave, she called over her shoulder, "get familiar with the ship, you two.  I'm afraid it's going to be your new home for awhile until we get resettled.

As the door closed behind Darth Nox, the Commander stated to the pair, "ladies, if you'll follow me, please," and proceeded down the corridor towards the hangar.  Upon reaching the catwalk, the Commander pointed toward the starship, turned to the women and said, "well there it is.  Looks like the group's chief engineer is there talking to one of the crew.  Let's continue, shall we?"

Pausing for a moment, Mako let out a whistle and exclaimed, "holy mother of..., that thing's huge!"

Adding to her partners comment, Malorva looked at the man, adding, "didn't know I was going to be driving a frigate, I'm going to like this."

Responding to their statements, the Commander said, "it is a magnificent machine, but it's what's on the inside and what you can't see, that will really impress you."  Motioning for the duo to follow, the man led them to the hangar floor where Gruud waited for them at the ship's entry ramp, waving as they approached.

As the group arrived at the ramp, Gruud leaned against one of its columns and motioned over his shoulder, "good morning Commander.  Sorry I can't stay around to help acquaint your new personnel with the ship."  Standing to leave, the Ugnaught went on, "but duty calls and I'm needed over at the loading docks.  Lexi and your new ship's chief engineer are in the engine room performing final adjustments, I'm sure she can do a better job than me any way, when they're finished."  Excusing himself, Gruud began walking toward one of the hangar's exits to his next assignment.

With a slight bow, the Commander turned to the women and motioned up the ramp, "well, it appears you're stuck with me.  Come with me and I'll give you the five credit tour..."

As someone mentioned on a previous image, the sense of humor you give your various characters is a nice touch to the story lines.

Another great chapter in your saga.