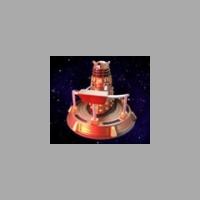 I'm a 50-something Scotsman living in Glasgow, and I've been into CG art since 2005, and I like to think I'm not that bad at producing stuff that people like. I just hope I'm not deluding myself (^_^) My tastes run from glamour and fantasy, anime and manga, through to retro SF images and fake magazine and book covers.<br /> I used&#160;Poser when I first started, but now I use DAZ Studio (latest version)&#160;for setting up and posing figures, and Bryce for the final renders. My own props and sets are created in TS4, which is a bit clunky, but it lets me build some interesting stuff. PhotoShop and Gimp are where it all comes together. I use only DAZ people in my artwork, as I find the Poser people a bit lacking in the looks and versatility department. I used to draw a lot, but discovering 3D has allowed me to create the kind of images I could never achieve with 'normal' media.<br /> Thanks for all the positive and helpful comments that I have received. It's nice to get feedback from fellow artists. Makes posting the images seem worthwhile.&#160; At one time I was producing a CGI comic for a British comic-magazine called "Spaceship Away" but the editor decided that he would reduce my page count - and I decided that no he wasn't and pulled out all together.&#160; Although it lasted a short time it allowed me to experience life as a professional comics artist.&#160;<br /> Hopefully it won't be my only time ^_^

theseus88bc posted a new gallery image Sunrise on the Clyde.