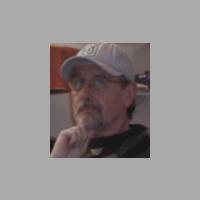 Hi, everyone! Thanks for dropping by at Gene's Place. <br /> <br /> BIO<br /> <br /> I'm a 59-year-old novice artist who only somewhat recently discovered Bryce. I live in USA's Pacific Northest (Spokane, WA). I don't have a life, but I *DO* have Bryce, DAZ Studio and a Renderosity Gallery...;^D<br /> Discovering "consumer" 3D applications at a time when they're rapidly becoming both more powerful and more affordable has been a Godsend for me.Â  My finger/manual dexterity is abysmal, making attempts at "traditional" art laughable.Â  On a shoestring budget I cobbled together a Power Mac G4 system with just enough power to run Bryce 5.5 and DAZ Studio at slightly-faster-than-molasses speed. At the start of June '06 I bought Bryce 5.5 Jumpstart and installed DAZ Studio. I've been experimenting with Bryce extensively on a daily basis since then, and I'm learning a little about DS as I go.<br /> <br /> Update May '08:Â  I no longer consider myself a novice at 3D art, but I still have a lot to learn.Â  I can't say I really *understand* the software (a lot of 3D art terminology still goes over my head - LOL!) but I'm comfortable enough with Bryce and DS to feel OK calling myself an artist.Â  I've acquired a few other apps (most notably Carrara and MojoWorld) and promised myself that I'll at least learn the basics of one of them this year.Â  I now work with a much more adequate system, a Digital Audio Power Mac G4 with dual 1.6 GHz CPUs and 1.5 GB RAM.Â  I dream of a Quad Xeon Mac Pro, but what I have now should suffice until I hit the lottery...;^O