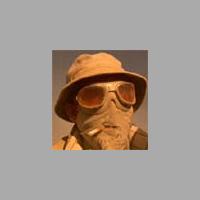 Hmmmm, so you might be wondering just who ol' toady is and maybe evenÂ how he came to have such a terrible username.Â Easy things first, IÂ guess.Â AÂ long time ago in a land far away (Nv.) IÂ was stuck for a name to sign upÂ with at an old 'The Sims 1' website so IÂ let their random name generator pop one out and lo, there was toad. I've used it ever since simply because IÂ never have to try and come up with another... it's always available for someÂ strangeÂ reason.

IÂ played TS1 and then 'The Sims 2' for a number of years withÂ also actually trying my hand at creating things for it the last couple of yearsÂ that IÂ was involved. In the end (to me) the community was getting rapidly disgusting. Backbiting and fighting all over the place and around the end of 2008Â IÂ decided IÂ pretty much didn't want anymore to do with it as a whole.Â

It was alsoÂ at that time that IÂ finally got off of my dead ass and grabbed a copy of Daz Studio. IÂ have been a member here longer than my join date alludes to, actually going back a few years prior to the '04 that is listed. I've always been fascinated by the creativity that was here atÂ the site and frequently amazed by what IÂ saw peopleÂ doing in Poser and other 3D programs.

IÂ learned at an early age that "real art" was something beyond my scope of talents that were bestowedÂ upon me. Oh, IÂ drew prodigiously as a youngster but neverÂ seemed to be able to satisfy my over critical self exams. My Mom on the other handÂ thought enough of them though to actually enroll me in an art class whenÂ I was still quite young, somethingÂ I stuck with for awhile and then continued into both Jr. and Sr. High School. She also (I was surprised to find out here these last few years) actually thought enough about them to have saved a number of them away, something IÂ personally never did with anything I'd ever created. Nope, not a one.

Anyhoo,Â enough about me. IÂ will continue to plug away at this very enjoyable and relaxingÂ medium. I've lots to learn and I'mÂ attempting to tryÂ something new or a little different everytime IÂ open D/S and/or my editing programs. Hopefully every once in a while IÂ can create something that you enjoy...